This letter, written by Joseph Norwood to his brother-in-law, Walter Waightstill Lenoir, described the movement of Stoneman’s troops through western North Carolina.

LenoirLenoir, in Caldwell County, is located about 90 miles west of Winston-Salem. 2nd Apl 1865

We are just through with a scene of alarm & very great danger. Stoneman has just swept through the country with 10,000 cavalry towards Wilkesboro, Salem, Salisbury Greensboro Hillsboro & Raleigh -- & we fear there will be no adequate preparation made to meet him. About dark on Tuesday evening last the heart of the column reached the Factory & in a few minutes the people around were under guard & the command in camp! They were equipped in the very best manner, & under the severest discipline & were not allowed to plunder to any great extent or commit any acts of violence. They left about 3 O'clock next day Wednesday (29th) except 2 companies that were left to burn the FactoryStoneman's men burned down a cotton mill owned by Rufus Patterson. -- which they did with great coolness and method. They also set fire to the storehouse & grainery &c. Most of the store-house the cotton house Tanery [sic] & oil [unclear] escaped. The little office joining the store was burned -- the last of them left by sundown. They reached Wilkesboro next evening about dark taking it by surprise also -- we hear that Just. Findley's house was burned -- but hope it is a mistake -- many of them said that a large body of infantry was behind -- we suppose has gone towards Virginia. So complete was their guard that they were all taken by surprise down the river & lost all of their horses and mules except Genl Patterson'sThis is probably Samuel Patterson, who was the Major General of the state militia during the Civil War. one little pony which they couldn't catch & Rufus one which happens to be out of the way. I have not seen Rufus being afraid to leave home -- A soldier who was there upon their arrival & made his escape gave us the facts about 2 O'clock that night -- And went on to the station. We did all we could in the way of hiding necessaries & running off negroes & stock but none of them came home. While at the Factory they made cousin Rufus' room their head quarters & treated him courteously -- behaved very [seedily] at Cousin Ed's the FortFort Defiance, the name of the Lenior family plantation, is ten miles north of the town of Lenior in Caldwell County. & other places -- but committed no violence. They told cousin Rufus that the secessionists down the river would fare badly. We suppose that their next stop would be Elkin or [Janesboro]. The force which passed the Factory -- six thousand was commanded by Guilam. Stoneman joined him at Holoman's Ford with 4 thousand. It is said a third column passed through Jefferson & camped over the river from Wilkesboro. I hope that is not so. About two days before a considerable number of negro men left for Tennessee -- & have not been heard from since including 4 from the Fort. 1 Genl. Patterson's 12 E. Jones & 5 from here. Elias John Turner Jones and Wash -- from the fort-Larkin Erin Jerry & Joe -- I have not heard to[o many] went with the cavalry. Some of the officers cursed the negroes & wished them all in Hell. We had been for some time before under constant apprehension about tory or robber raids & I have been serving on guard at town every third night & have been as much as two weeks with out taking off my clothes. We are always in danger except when a portion of Avery's commandIsaac Eriwn Avery was a Confederate officer from North Carolina who died at the Battle of Gettysburg. Norwood, and presumably others in North Carolina, continued to refer to the men who served with Avery as "Avery's men." is here which is not very often -- Home guard no account. A few days before these troubles commenced I rec. your War_Song & other [piece] we were all very much pleased with them especially the song of which I had the girls to make a good many copies & distribute it pretty generally -- & I was about to send it to 3 of the papers -- but will wait now until the Storm is passed. 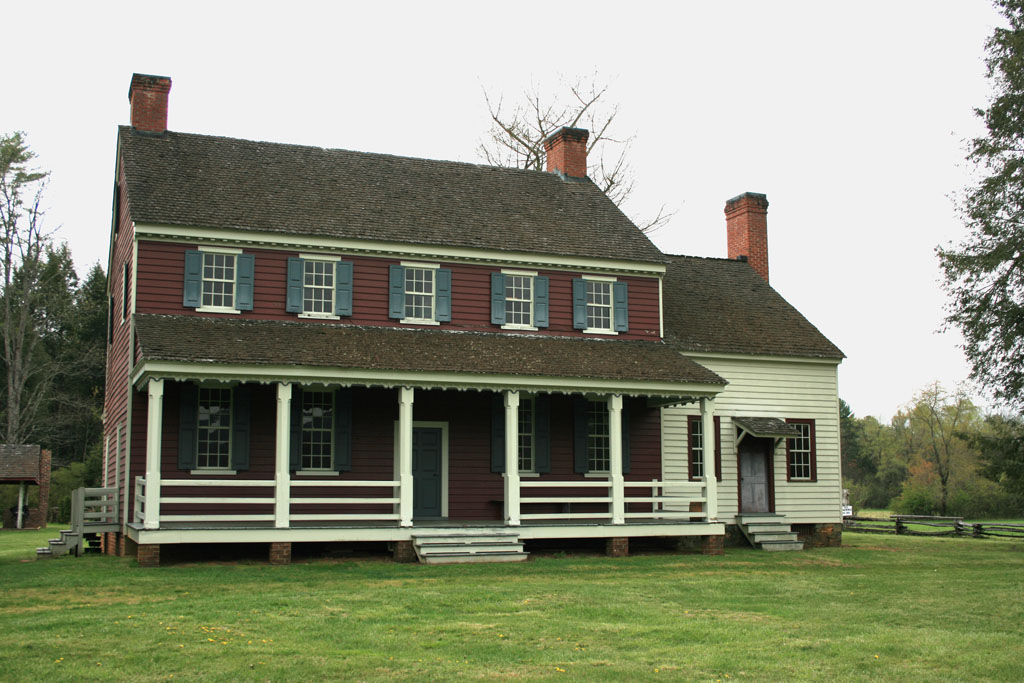 Fort Defiance, the Lenoir family home, is located the town of Lenoir in Caldwell County. 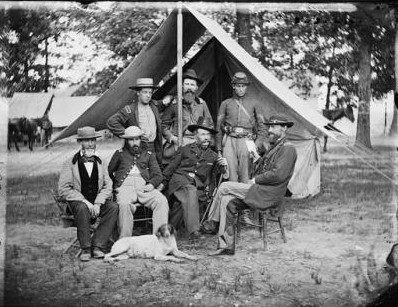 Photograph of General Stoneman and General Naglee with their staffs taken near Fair Oaks, Virginia.