An Address to the People of Granville County

On June 6, 1765, North Carolina backcountry teacher George Sims drafted an address expressing dissatisfaction with government officials and accusing local court officers of malpractice. He blamed corrupt lawyers and public officials for the problems of small farmers in the area we now call the Piedmont. His address found a receptive audience in Granville County (today Vance County) and surrounding frontier counties like Orange. The address circulated widely in the area, and it led to increased agitiation by residents. And it was later used by Regulator leaders to bolster their movement against government corruption. Sims address has become known as the "Nutbush Address," named after the area of then Granville County (present-day Vance County) known as Nutbush.

Read the address below:

Gentlemen, it is not our mode, or form of Government, nor yet the body of our laws, that we are quarrelling with, but with the malpractices of the Officers of our County Court, and the abuses which we suffer by those empowered to manage our public affairs...

[L]et us make an estimate of the difference between getting our livings by honest industry and getting them by these cursed practices. We will suppose ourselves all to be men, who labour for our livings, and there is a poor man among us, who has dealt for about 4 or 5 pounds in such things as his family could not possibly do withoutThat is, the poor man has borrowed 4 or 5 pounds to buy things his family needs., and in hopes of being spared from the lash of the law till he can sell some of his effects to raise the money; he gives a judgment bond to his Merchant, and before he can accomplish his design his bond is thrown into CourtHe promises to pay, but the merchant demands his money back before the man can repay him, and sues him in court. In law, a bond is an agreement that binds two people or obligates them to each other., and Benton the poor mans BurgessBenton was the clerk of court for Granville County. A clerk of court kept the court records and scheduled cases. Clerks of court, like sheriffs and registers of deeds, were not paid a salary. Instead, they charged citizens for their services. You can imagine, then, that they had an incentive to charge as much as they thought they could get away with! has it to enter on the Court docquet and issue an execution the work of one long minuteThat is, it takes the lawyer only a minute to "issue an execution," or to do his job.. Well, Gentlemen, what has our poor neighbour to pay Mr. Benton for his trouble? Why, nothing but the trifling sum of forty one shillings and five penceThere were twenty shillings to the pound, so the poor man's court fees were over two pounds -- about half his debt to the merchant.. Well he is a poor man, and cannot raise the money. We will suppose Mr. Benton condescends to come to terms with him. Come (says he) and work. I have a large field and my corn wants weeding (or something like that). I will give you 1/6One shilling sixpence. a day, which is the common wages of a labourer in these times till you pay it off because you are a poor man, and a neighbour I will not take away your living. Well how many days work has our honest neighbour to pay Mr. Benton for his trouble and expense in writing about a minute? Why, he must work something more than 27 days before he is clear of his clutches. Well the poor man reflects within himself. At this rate says he when shall I maintain my own family. I have a wife and a parcel of small children suffering at home and I have none to labour but myself, and here I have lost a month’s work and I do not know for what, my merchant not yet paid, I do not know what will be the end of these things; however, I will go home, and try what I can do towards getting a living. Stay neighbour, you must not go home, you are not half done yet, there is a damned Lawyers mouth to stop before you go any further, you impowered him to confess that you owed £5, and you must pay him 30/ for thatWhen the poor man was sued for his debt, he had to hire a lawyer to represent him in court, which cost more money., or, else go and work nineteen days for that pick-pocket at the same rate, and when that is done, you must work as many days for the Sheriff, for his troubleSheriffs, like lawyers and clerks of court, charged citizens fees for their services., and then go home and see your living wrecked and tore to pieces to satisfy your merchant.

Well Gentlemen, if this were the case, would it not be a melancholy thing? But it is worse by ten degrees than any thing that you have yet heard. It is not a persons labour, nor yet his effects that will do, but if he has but one horse to plow with, one bed to lie on, or one cow to give a little milk for his children, they must all go to raise money which is not to be hadMoney was in short supply in colonial America, which made it especially difficult for people to pay debts and court fees. (See "The Value of Money in Colonial America" for an explanation.). And lastly if his personal estate (sold at one tenth of its value) will not doIf a man could not pay his debts, his property would be taken by the Sheriff and sold at public auction. Since cash was scarce, though, only wealthy men could afford to buy the debtor's property. In fact, the Regulators complained that it was often the same lawyers and local officials who bought debtors' property at auction to pay their own bills., then his lands (which perhaps has cost him many years toil and labour) must go the same way to satisfy these cursed hungry caterpillars, that are eating and will eat out the bowels of our Commonwealth, if they be not pulled down from their nests in a very short time, and what need I say, Gentlemen, to urge the necessity there is for a reformation. If these things were absolutely according to law, it would be enough to make us turn rebels, and throw off all submission to such tyrannical laws..... But, as these practices are diametrically opposite to the law, it is our absolute duty, as well as our Interest, to put a stop to them, before they quite ruin our County. Or, Are become the willing slaves of these lawless Officers, and hug our chains of bondageDuring the Revolution, American patriots talked a lot about slavery and bondage -- not about the slaves they owned, but about themselves as slaves. This seems today like a crude exaggeration. In the eighteenth century, though, British and American writers tended to divide people into two groups: those who were free and those who were not. Free men (or freemen) had all the rights guaranteed under the British constitution, especially the right to vote and the right to due process of law (that is, fair treatment by proper legal proceedings). Sims is saying that if people are not given due process of law -- if they can be treated arbitrarily by public officials -- then they might as well be slaves. In a society that practiced actual, literal slavery, calling free men slaves had an especially powerful impact. People knew what real slavery looked like, and they didn't want to give any ground on the "slippery slope" from freedom to slavery. and remain contented under these accumulated calamities? No, Gentlemen, I hope better things of you... [F]irst, let us be careful to keep sober, that we do nothing rashly; but act with deliberation. Secondly, Let us do nothing against the known and established laws of our land, that we may not appear as a faction endeavouring to subvert the laws, and overturn our system of government. But, let us appear what we really are, To wit, free subjects by birth, endeavouring to recover our native rights according to lawLike most of the Regulators, Sims saw himself as a free citizen of the British empire, doing his duty by defending his rights as a citizen. The Regulators frequently insisted that they were not trying to overturn the laws -- that they were not rebelling, but only trying to "regulate" the actions of government officials., and to reduce the malpractices of the Officers of our Court down to the standard of law....

The Battle of Alamance: A Reanalysis of the Historical and Documentary Records

ANCHOR, "An Address to the People of Granville County", 2018, https://www.ncpedia.org/anchor/address-people-granville (accessed June 10, 2018). 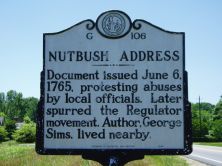 George Sims drafted his protest address in the Nutbush area of Granville (present-day Vance) County, N.C. A Highway Historical Marker is located near the site at Townsville, N.C.