Brown v. Board of Education of Topeka, Kansas

Transcript of Brown v. Board of Education (1954)

SUPREME COURT OF THE UNITED STATES

SyllabusA "syllabus" is a summary of the case. It is not part of the official opinion, but it is very useful in helping to understand the opinion quickly. (From the American Bar Association)

Segregation of white and Negro children in the public schools of a State solely on the basis of race, pursuant to state laws permitting or requiring such segregation, denies to Negro children the equal protection of the laws guaranteed by the Fourteenth Amendment -- even though the physical facilities and other "tangible" factors of white and Negro schools may be equal.

MR. CHIEF JUSTICE WARREN delivered the opinion of the Court.

These cases come to us from the States of Kansas, South Carolina, Virginia, and Delaware. They are premised on different facts and different local conditions, but a common legal question justifies their consideration together in this consolidated opinion.

In each of the cases, minors of the Negro race, through their legal representatives, seek the aid of the courts in obtaining admission to the public schools of their community on a nonsegregated basis. In each instance, they had been denied admission to schools attended by white children under laws requiring or permitting segregation according to race. This segregation was alleged to deprive the plaintiffsa person who brings a legal action of the equal protection of the laws under the Fourteenth Amendment. In each of the cases other than the Delaware case, a three-judge federal district court denied relief to the plaintiffs on the so-called "separate but equal" doctrine announced by this Court in Plessy v. Ferguson, 163 U.S. 537. Under that doctrine, equality of treatment is accorded when the races are provided substantially equal facilities, even though these facilities be separate. In the Delaware case, the Supreme Court of Delaware adhered to that doctrine, but ordered that the plaintiffs be admitted to the white schools because of their superiority to the Negro schools.

The plaintiffs contend that segregated public schools are not "equal" and cannot be made "equal," and that hence they are deprived of the equal protection of the laws. Because of the obvious importance of the question presented, the Court took jurisdiction. Argument was heard in the 1952 Term, and reargument was heard this Term on certain questions propounded by the Court.

Reargument was largely devoted to the circumstances surrounding the adoption of the Fourteenth Amendment in 1868. It covered exhaustively consideration of the Amendment in Congress, ratification by the states, then-existing practices in racial segregation, and the views of proponents and opponents of the Amendment. This discussion and our own investigation convince us that, although these sources cast some light, it is not enough to resolve the problem with which we are faced. At best, they are inconclusive. The most avid proponents of the post-War Amendments undoubtedly intended them to remove all legal distinctions among "all persons born or naturalized in the United States." Their opponents, just as certainly, were antagonistic to both the letter and the spirit of the Amendments and wished them to have the most limited effect. What others in Congress and the state legislatures had in mind cannot be determined with any degree of certainty.

An additional reason for the inconclusive nature of the Amendment's history with respect to segregated schools is the status of public education at that time. In the South, the movement toward free common schools, supported by general taxation, had not yet taken hold. Education of white children was largely in the hands of private groups. Education of Negroes was almost nonexistent, and practically all of the race were illiterate. In fact, any education of Negroes was forbidden by law in some states. Today, in contrast, many Negroes have achieved outstanding success in the arts and sciences, as well as in the business and professional world. It is true that public school education at the time of the Amendment had advanced further in the North, but the effect of the Amendment on Northern States was generally ignored in the congressional debates. Even in the North, the conditions of public education did not approximate those existing today. The curriculum was usually rudimentary; ungraded schools were common in rural areas; the school term was but three months a year in many states, and compulsory school attendance was virtually unknown. As a consequence, it is not surprising that there should be so little in the history of the Fourteenth Amendment relating to its intended effect on public education.

In the first cases in this Court construing the Fourteenth Amendment, decided shortly after its adoption, the Court interpreted it as proscribing all state-imposed discriminations against the Negro race. The doctrine of "separate but equal" did not make its appearance in this Court until 1896 in the case of Plessy v. Ferguson, supra Referred to earlier in this document, involving not education but transportation. American courts have since labored with the doctrine for over half a century. In this Court, there have been six cases involving the "separate but equal" doctrine in the field of public education. In Cumming v. County Board of Education 175 U.S. 528, and Gong Lum v. Rice, 275 U.S. 78, the validity of the doctrine itself was not challenged. In more recent cases, all on the graduate school level, inequality was found in that specific benefits enjoyed by white students were denied to Negro students of the same educational qualifications. Missouri ex rel. by or on the relation or information of Gaines v. Canada, 305 U.S. 337; Sipuel v. Oklahoma, 332 U.S. 631; Sweatt v. Painter, 339 U.S. 629; McLaurin v. Oklahoma State Regents, 339 U.S. 637. In none of these cases was it necessary to reexamine the doctrine to grant relief to the Negro plaintiff. And in Sweatt v. Painter, supra, the Court expressly reserved decision on the question whether Plessy v. Ferguson should be held inapplicable to public education.

In the instant cases, that question is directly presented. Here, unlike Sweatt v. Painter, there are findings below that the Negro and white schools involved have been equalized, or are being equalized, with respect to buildings, curricula, qualifications and salaries of teachers, and other "tangible" factors. Our decision, therefore, cannot turn on merely a comparison of these tangible factors in the Negro and white schools involved in each of the cases. We must look instead to the effect of segregation itself on public education.

In approaching this problem, we cannot turn the clock back to 1868, when the Amendment was adopted, or even to 1896, when Plessy v. Ferguson was written. We must consider public education in the light of its full development and its present place in American life throughout the Nation. Only in this way can it be determined if segregation in public schools deprives these plaintiffs of the equal protection of the laws.

Today, education is perhaps the most important function of state and local governments. Compulsory school attendance laws and the great expenditures for education both demonstrate our recognition of the importance of education to our democratic society. It is required in the performance of our most basic public responsibilities, even service in the armed forces. It is the very foundation of good citizenship. Today it is a principal instrument in awakening the child to cultural values, in preparing him for later professional training, and in helping him to adjust normally to his environment. In these days, it is doubtful that any child may reasonably be expected to succeed in life if he is denied the opportunity of an education. Such an opportunity, where the state has undertaken to provide it, is a right which must be made available to all on equal terms.

We come then to the question presented: Does segregation of children in public schools solely on the basis of race, even though the physical facilities and other "tangible" factors may be equal, deprive the children of the minority group of equal educational opportunities? We believe that it does.

In Sweatt v. Painter, supra, in finding that a segregated law school for Negroes could not provide them equal educational opportunities, this Court relied in large part on "those qualities which are incapable of objective measurement but which make for greatness in a law school." In McLaurin v. Oklahoma State Regents, supra, the Court, in requiring that a Negro admitted to a white graduate school be treated like all other students, again resorted to intangible considerations: "...his ability to study, to engage in discussions and exchange views with other students, and, in general, to learn his profession." Such considerations apply with added force to children in grade and high schools. To separate them from others of similar age and qualifications solely because of their race generates a feeling of inferiority as to their status in the community that may affect their hearts and minds in a way unlikely ever to be undone. The effect of this separation on their educational opportunities was well stated by a finding in the Kansas case by a court which nevertheless felt compelled to rule against the Negro plaintiffs:

Segregation of white and colored children in public schools has a detrimental harmful effect upon the colored children. The impact is greater when it has the sanction of the law, for the policy of separating the races is usually interpreted as denoting the inferiority of the negro group. A sense of inferiority affects the motivation of a child to learn. Segregation with the sanction of law, therefore, has a tendency to [retard] the educational and mental development of negro children and to deprive them of some of the benefits they would receive in a racial[ly] integrated school system.

We conclude that, in the field of public education, the doctrine of "separate but equal" has no place. Separate educational facilities are inherentlyby nature unequal. Therefore, we hold that the plaintiffs and others similarly situated for whom the actions have been brought are, by reason of the segregation complained of, deprived of the equal protection of the laws guaranteed by the Fourteenth Amendment. This disposition makes unnecessary any discussion whether such segregation also violates the Due Process Clause of the Fourteenth Amendment.

Because these are class actions, because of the wide applicability of this decision, and because of the great variety of local conditions, the formulation of decrees in these cases presents problems of considerable complexity. On reargument, the consideration of appropriate relief was necessarily subordinated to the primary question -- the constitutionality of segregation in public education. We have now announced that such segregation is a denial of the equal protection of the laws. In order that we may have the full assistance of the parties in formulating decrees, the cases will be restored to the docket, and the parties are requested to present further argument on Questions 4 and 5 previously propounded by the Court for the reargument this Term. The Attorney General of the United States is again invited to participate. The Attorneys General of the states requiring or permitting segregation in public education will also be permitted to appear as amici curiae person or organization that is not involved in a process of a specific legal action, but the court allows individual(s) to give advice that will directly affect the case a  upon request to do so by September 15, 1954, and submission of briefs by October 1, 1954.

It is so ordered.

Supreme Court of the United States, decision in Brown v. Board of Education of Topeka, Kansas, May 17, 1954.

Transcript of Brown v. Board of Education (1954)

SUPREME COURT OF THE UNITED STATES

[qtip:Syllabus|A "syllabus" is a summary of the case. It is not part of the official opinion, but it is very useful in helping to understand the opinion quickly." data-share-imageurl=""> 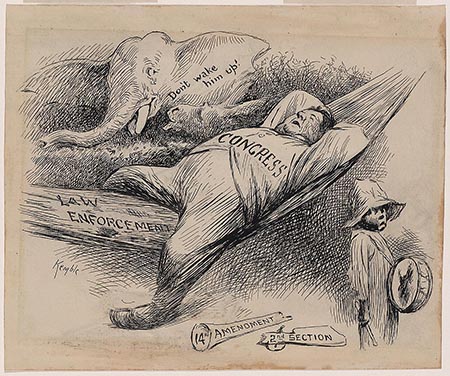 Cartoon shows Congress as a fat man asleep in a hammock labeled "Law Enforcement." A broken blunderbuss, labeled "14th Amendment, 2nd Section," lies at his feet. A small black boy walks by holding a drum, but an elephant cautions, "Don't wake him up!"