By 1770, the General Assembly had done very little to address the concerns and anger of North Carolina's backcountry farmers or to appease the increasingly bitter Regulators. The situation was ripe for conflict when the colonial Superior Court met for its bi-yearly session in Hillsborough in September. In 1768 when the court had previously met in Hillsborough, a throng of Regulators had come to the court session to have their complaints heard and remedied. That session erupted when government officials many considered corrupt -- Colonel Edmund Fanning and Francis Nash -- were found guilty of extortion but fined only a single penny, while the Regulators who had accused them all along of extortion and then refused to pay their taxes as a result were fined and jailed. Violence was avoided when the nearly 4,000 Regulators left Hillsborough.

In the following year, the Regulators attempted to improve the situation by legal means. Petitions to the governor were filed and positions within the Assembly were won by Regulators. Then Governor Tryon dissolved the Assembly.

When the court met again in September of 1770, there were many cases involving Regulators on the docket, and approximately 150 Regulators arrived at the Hillsborough courthouse, many of whom were conspicuously armed. After less than an hour of proceedings, tensions between officials and Regulators boiled over. Regulators beat a local attorney and then turned to Colonel Edmund Fanning, who many -- Regulators and nonregulators alike -- felt had been dishonest and exploitive in his role as clerk of the Superior Court of Orange County. The Regulators dragged Fanning down the steps and then pummeled him outside of the courthouse; eventually Fanning escaped to safety in a nearby shop. The next day, the Regulators demolished Fanning's Hillsborough home.

The Contemporary newspaper reported about this "mob violence" in Hillsborough, North Carolina, in October 1770. This instance was only one example of violence was part of a series of protests by Regulators angry with illegal fees and corrupt officials. A transcription is below.

On Wednesday last, a special messenger arrived in town from Granville County, to his Excellency the Governor, with the melancholy account of a violent insurrection, or rather rebellion having broke out in Orange County, among a set of men who call themselves regulators, and who for some years past have given infinite disturbance to the civil government of this province, but now have sapped its whole foundation, brought its courts of Justice to their own controul, leaped the strong barrier of private property, and audaciously violated the laws of God and man.

These people have for a long time opposed paying all manner of taxes, have entertained the vilest opinion of the Gentlemen of the law, and often threatened them with their vengeance. Accordingly, as the Hon. Judge Henderson, and several Gentlemen of the law, were returning from Salisbury CircuitThe Salisbury Circuit was the circuit court of Salisbury. In a circuit court, a judge and perhaps a group of lawyers would travel from place to place to hold court. to Hillsborough, in order to hold court there, they were waylaid by a number of them with their rifles; but happily having notice of their hellish design, by taking a contrary routRoute, eluded their bloody plot. They still gave out their threats of meeting them at Hillsborough, and wreaking their vengeance on them there.

These menaces were treated with contempt, or rather the violent ravings of a factious and discontented mob, than any settled and fixed resolution of men or property to commit so daring an insult to the laws of the Country, and accordingly the court was opened, and proceeded to business. But on Monday, the second day of the court, the tragical scene began; a very large number of those people, headed by men of considerable property, appeared in Hillsborough, armed with clubs, whips, loaded at the ends with lead or iron (a stroke from which would level the strongest man) and many other offensive weapons, and at once beset the courthouse. The first object of their revenge was Mr. John Williams, a Gentleman of the law, who they assaulted as he was entering the court; him they cruelly abused with many and violent blows with their loaded whips on the head, and different parts of his body, until he by a great good fortune made his escape, and took shelter in a neighbouring store. They then entered the courthouse, and immediately fixed their attention on Colonel Fanning, as the next object of their merciless cruelty; he expected his fate, and had retired to the Judge's seat, as the highest part of the courthouse, from which he might make the greatest defence against these bloodthirsty and cruel savages; but, poor Gentleman, vain were all his efforts, for after behaving with the most heroic courage he fell a sacrifice to numbers, and suffered a cruelty the richest language can but faintly paint. They seized him by the neck, dragged him down the steps, his head striking violently on every step, carried him to the door, and forcing him out, dragged him on the ground over stones and brickbatsPieces of bricks, struck him with their whips and clubs, kicked him, spit and spurned at him, and treated him with every possible mark of contempt and cruelty; until at length, by a violent effort of strength and activity, he rescued himself from their merciless claws, and took shelter in a house. The vultures pursued him there, and gave him a stroke that will probably destroy one of his eyes. In this piteous and grievously maimed condition they left him for a while, retreated to the courthouse, knocked down and very cruelly treated the deputy clerk of the Crown, ascended the bench, shook their whips over Judge Henderson, told him his turn was next, ordered him to pursue business, but in the manner they should prescribe, which was, that no lawyers should enter the courthouse, no juries but what they should pack, and order new trials in cases where some of them had been cast for their malpractices. They then seized Mr. Hooper, a Gentleman of the law, dragged and paraded him through the streets, and treated him with every mark of contempt and insult. This closed the first day, but the second day presented a scene, if possible, more tragick. Immediately on their discovering that the Judge had made his escape from their fury, and refused to submit to the dictates of lawless and desperate men, they marched in a body to Colonel Fanning’s House, and on a signal given by their ringleaders, entered the same, destroyed every piece of furniture in it, ripped open his beds, broke and threw in the streets every piece of china and glass ware in the house, scattered all his papers and books in the winds, seized all his plate, cash, and proclamation moneyProclamation money was paper money printed by the colonial government or other materials, such as foreign currency, used as money. See "The Value of Money in Colonial America" for a fuller explanation.; entered his cellars, and after satiating and gorging their more than savage stomachs with his liquors stove and threw in the streets the remainder. Being now drunk with rage, liquor, and lawless fury, they took his wearing clothes, struck them on a pole, paraded them in triumph through the streets, and, to close the scene, pulled down and laid his house in ruins, Hunter and Butler, two of their chiefs, stripping in Buff, and beginning the heroic Deed. They then went to a large handsome church bell that Colonel Fanning, at the Expence of 60 or 70 £, had made a present of to the church of Hillsborough, and split it to pieces, and were at the Point of pulling down the church, but their leaders, thinking it would betray their religious principles, restrained them. Their revenge being not yet satiated on this unhappy Gentleman, they again pursued him, again cruelly beat him, and at length with dogs hunted him out of town, and with a cruelty more savage than bloodhounds stoned him as he fled. What heart but feels for the distresses of this unfortunate Gentleman! What hand that would not be uplifted in defence of such injured innocence!

When they had fully glutted their revenge on the lawyers, and particularly Colonel Fanning, to shew their opinion of courts of justice they took from his chains a negro that had been executed some time, and placed him at the lawyer’s bar, and filled the Judge’s seat with human excrement, in derision and contempt of the characters that fill those respectable places. Would a Hottentot"Hottentots" was the name given by Europeans to a native people of southwest Africa, the Khoikhoi, related to the Bushmen. The term was also used (as it is here) to suggest general savagery. been guilty of such a Piece of brutality! or is there the most savage nation on earth whose manners are less cultivated!

A paragraph of a letter from a Gentleman, who was eye witness of the above dismal scene, says: "The merchants stores are broke and rifled, Mr. Cooke's house torn to pieces, and Mr. Edward's had not shared a better fate. The inhabitants have fled the town and the regulators live at their expense; they are in possession of their houses, and make the best use of the emergency to satiate their cursed passions, and appetites. Here my pen drops; I satiate with the painful recital".

In short, all civil government in Orange County is relaxed, the courts of justice totally stopped, and every thing reduced to the power and controul of a set of men who call them selves regulators; but are in fact no other than a desperate and cruel banditi, actuated by principles that no laws can restrain, no honour or conscience bind. 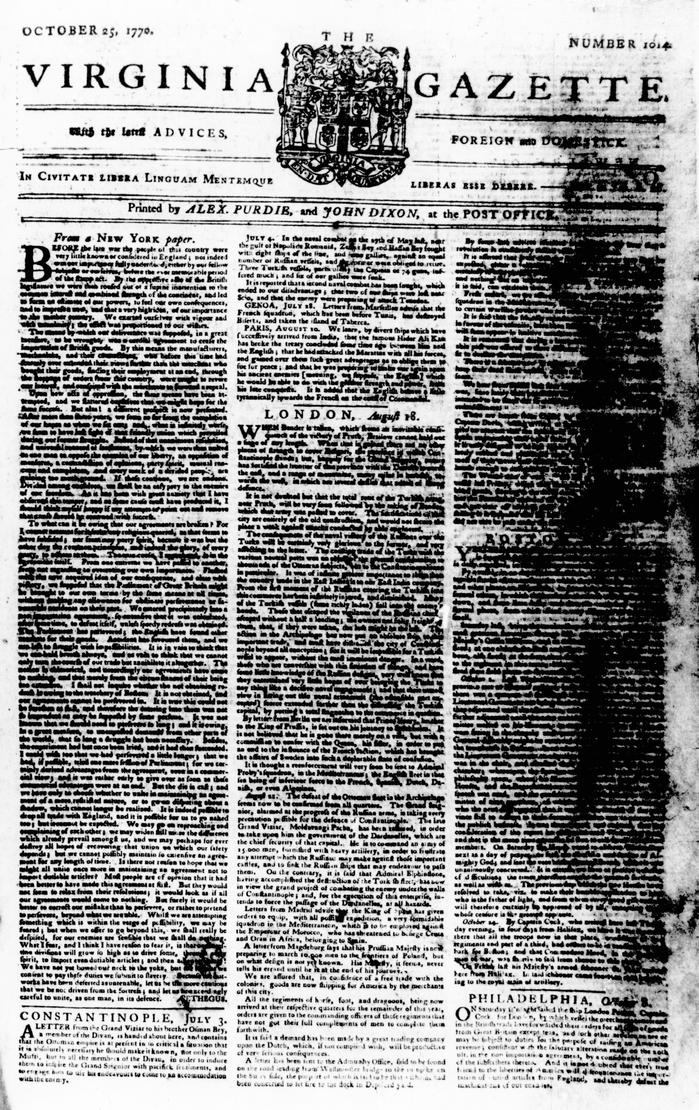 View the original article in the Virginia Gazette