Description of a Nineteenth Century Revival

Ministers used revivals to bring people into the church, and to bring believers who had strayed from God back to righteousness. Participants at revivals often prayed for a conversion experience — an intense emotional and sometimes physical experience of God’s presence.

People often began this process in despair, recognizing that they were sinful and were doomed to hell. This period of emotional turmoil might last several hours, days, weeks, months — even years. Eventually, they would have an emotional experience in which they felt God’s presence telling them that their sins had been forgiven and that they would be saved — that they would go to heaven when they died.

Samuel McCorkle (1746–1811) was a Presbyterian minister and teacher in Rowan County. He believed in the importance of education, but he also argued that education was not enough to make people good — they also needed revelation from God. He preached the need to be “reborn” so that people might understand God’s will for them and for the world.

June, 4–8, 1802.
A sermon was delivered on Friday to a large, thoughtless, disorderly crowd, which became gradually composed and serious, until Monday, which was the most solemn day that my eyes ever beheld. Near three thousand persons attended, and of these near three hundred were exercised throughout the occasionBy "exercised" Rev. McCorkle means that the people had an intense emotional or spiritual experience -- their emotions were "exercised" as your muscles would be during a hard workout. Why does he use that phrase? What does it suggest about who is in control of the process?, and perhaps not fewer than half of them on Monday.

Nothing very unusual at such meetings appeared, until Sunday evening, when a stout negro-womanwoman Does it surprise you that this revival was integrated -- that both blacks and whites were present? Early in the Second Great Awakening, revivalist preachers worked to convert African Americans, both enslaved and free, along with whites. In fact, after the Revolution, many white Methodists and Baptists argued for the abolition of slavery. As a result, many African Americans were converted at these early revivals. Until this time, many slaves had held onto Islam and to the traditional religions of West Africa. Most slaveholders were happy to see their slaves converted -- some wanted their salvation, while others believed that their slaves would be easier to control if they believed in a God that asked them to obey. Gradually, though, African American Christianity grew apart from its white origins. As slavery grew more profitable after 1800, Southern desire for abolition died out. Many white Southerners objected to integrated revivals, and as evangelical churches grew more established, they became more segregated. And, of course, few blacks were interested in listening to white ministers preaching obedience. In 1815, African Americans in Philadelphia formed the African Methodist Episcopal (A.M.E.) Church, and it quickly grew. There were also many black preachers in the South, including North Carolina -- until Nat Turner's Rebellion, when white North Carolinians decided that black preachers were dangerous and could stir up too much trouble and banned public preaching by blacks. But African Americans continued to practice Christianity in their own ways, both in the slave quarters and in freedom., who had been all day mocking the mourners, fell; and fell in a state of horror and despair that baffles descriptionThe "stout negro-woman" had mocked the preachers, but then underwent an intense and painful conversion experience. Similarly, the man in the next paragraph asked the preachers if they were really serious, then was himself converted. Why does Rev. McCorkle write specifically about these two examples? Why would two people who had openly admitted to doubting the conversion experience be the hit of the revival? What did this show to others who witnessed the events?. In this state, she continued with intervals, for three hours. I viewed her all the time, and it was impossible for my imaginations to conceive of her being more tormented had she actually been in hell. She often roared out, "O hell! hell! hell! Thy pangs have seized me! O torment! torment! What torments me! Hell can't be worse. Let me go there at once. It is my dreadful doom." She said she saw hell-flames below, herself hung over by a thread, and a sharp, bright sword drawn to cut it through. Her exertions, at this moment, no angel nor devil could describe. Two stout negro-men where no match for her struggles. Such an exercise I never beheld, and I have seen not less than a thousand. No one that saw it, ever beheld anything that would stand in comparison. At intervals, she cried, "O for mercy! but what have I to do with mercy? No mercy for poor miserable me." Hope, however, began to prevail, and at last she shouted, "Glory, glory!" as loud, and as long as she had roared out "Hell-torment" before. "Astonishing" said she, "I have mocked the mourners, boasted that I could stand, been in hell, and O praise God, praise Him, praise Him, He has brought me out. Never, never, let me forget to love, and praise, and serve my God, my Redeemer."

Very different, but less noticeable was another exercise on Monday after a sermon and two exhortationsAn exhortation is a speech urging someone to do something. In this context an exhortation would have challenged people to change their lives and be more moral or more virtuous. A sermon might discuss a particular part of the Bible and the preacher would usually discuss teachings, ideas, or experiences. In an exhortation, the preacher would specifically call people to repent and ask God if they were saved., arose, with trembling and wild consternation, a man who adjured the preachers before God, to say on their conscience, whether they did believe the necessity of those convictions which they had been urging. The whole assembly was struck with solemn astonishment. The preachers, after a pause, said with one voice, "We do, we do believe it." He then turned to the assembly, and begged of those who had felt convictionsPeople who had felt "convictions" had gone through the conversion process and were now saved. They had understood that they were sinful, that they were doomed for hell, but they had asked God to forgive them, and they now felt that they were saved., to pray for him, and others who had not. He sat down. An awful silence ensued, and then a prayer was performed for them. When this scene ended, he rose, and called on all who had not felt conviction, to join with him in prayer for themselves. After a short, patheticPathetic means emotional, and invoking feelings of sadness or sympathy for the person. prayer, he retired. I afterwards conversed with him. He said that he had never suspected our sincerity, but I wished to have the assembly impressed with our public declaration; that his first feeling was a bodily sensation rising from his bowels towards his breast, and that with this sensation arose his resolution to speak, and an impulse irresistible to execute it. And certain am I that, had he studied for a year, he could have devised no plan that would have produced such a solemn effect on the assembly. In the evening he was severely exercised, and obtained as much consolation as, in his words, "such a sinner could expect." "This," said he, "is the chief ground of my consolation, that I feel resolutions made with a temper which I never experienced before. I think I feel that I am acting from principles, and that I feel the principles from which I act." This man possessed a large portion of natural understanding, and a liberal educationThis man, who admitted doubts about the conversion experience, said that he had a "liberal education." A liberal education teaches students to be good citizens rather than providing them with a specific set of skills. In a liberal education, the student would take a variety of classes in philosophy, history, religion, and sciences. Someone with a liberal education would be taught to question and analyze the world around him, with the goal of leading and mastering it. Here, the man (and Rev. McCorkle, who quotes him) is suggesting that his liberal education did not bring him any closer to God, and may have driven him further away from salvation. The conversion experience is described as a sudden, intensely emotional experience that comes from God -- there was nothing intellectual about it at all, and there was no point at which the converted person seems to have been in control. What does that suggest about how revivalists would have valued education? You might compare his perspective on liberal education to this one, from 1810 -- and keep it in mind when you read, later on, about North Carolina's long delay in setting up a system of public education., but regrets that he has been too long wandering through the wilds of infidelity and intemperance. He has firmly resolved to abandon his old companions, and choose new ones, and be another man. May God enable him so to do.

What wonders are doing around us! What think you of a wedding, a gay giddy bride, and a severe exercise on her bridal day?What is Rev. McCorkle's explanation for this story? He says "What wonders are around us!" -- suggesting that he thinks this is a miracle. Can you think of any reasons why the woman might have had these feelings on this day, as opposed to any other day? All this has happened in the vicinity of this meeting, but a few days before it, I conversed with the bride. She said she had thought seriously of this work beforeShe had thought about her own salvation and eternal damnation before, but she was not thinking about it at the time.; but was not, when struck, thinking seriously about anything. She was struckWhy does Rev. McCorkle say she was "struck"? What does that word suggest about her feelings, both physical and emotional? soon after the ceremony was performed, and struck in such an awful manner, that for some time she knew not what was the matter. Her friends were prodigiously alarmed, and their mirth turned into sober sadness. She at last obtained a little consolation, and told me she was earnestly seeking for more. In the vicinity of this place is a man of mid-age, who was struck in his bed; and a young woman, who experienced all this work in secretShe had gone through a conversion experience on her own, without being at a revival, nor had she had been helped by a minister. five or six years before she saw it in others. I know her, and believe that she abhors a lie.

Samuel McCorkle to John Langdon, August 9, 1802, in William Henry Foote, Sketches of North Carolina Historical and Biographical, Illustrative of the Principles of a Portion of Her Early Settlers (New York: Robert Carter, 1856), pp. 402–404. 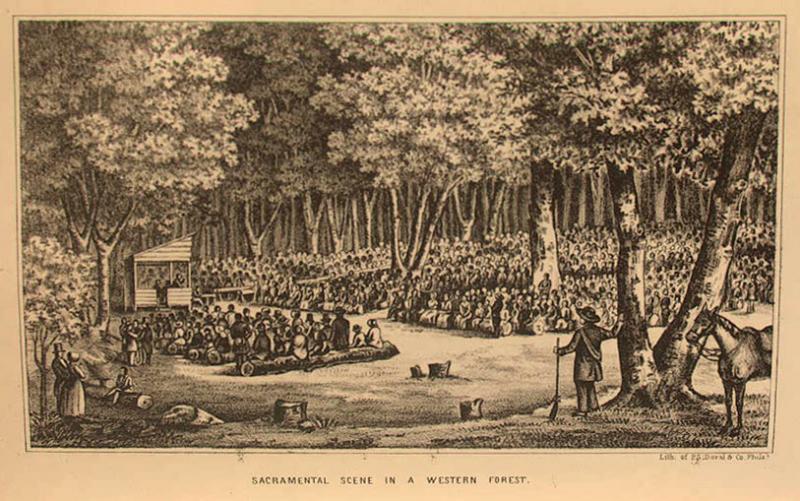 This illustration, from about 1801, shows a revival in the "western woods."