Education and Literacy in Edgecombe County, 1810

Jeremiah Battle, a doctor in Edgecombe County, wrote this report of education in his county in 1810, probably as a letter to a friend. It was reprinted in the UNC University Magazine in 1861.

As to the "progress of civilization," little can be said here. Knowledge is certainly more abundant than formerly. Learning, morality and religion are more encouraged, or at least viewed with more complacency. The peaceful, social and humane virtues, it is believed, have more than kept pace with the growth of population. A thirst for knowledge was never great here. The people are neither aspiring, restless nor basely servile. They are generally satisfied with their political situations, and seldom trouble their minds with polities. There are not more than one hundred and eight newspapers taken weekly in the countyThat is, 108 copies of various newspapers were sold in the county each week. There were 10 newspapers published in North Carolina in 1810, compared with the 71 in Pennsylvania and 66 in New York State.. Although learning is not generally diffused, yet since the establishment of the University of this State there are more who possess liberal educationA liberal education teaches students to be good citizens rather than providing them with a specific set of skills. In a liberal education, the student would take a variety of classes in philosophy, history, religion, and sciences. In a professional school, such as law school or medicine, the emphasis is on teaching students a body of knowledge that directly relates to their job. now that at any former period.

There is a certain suavity of manners employed in many places by candidatespolitical candidates for popular favor very little studied or desired here till within a few years past. It consists in a peculiar shake of the hand, called by our farmers the electioneering shake -- in purchasing brandy and drinking with the peopleBuying liquor for voters was a common practice throughout the United States. Eventually laws were passed that closed taverns and pubs on election days. In some states, such as Pennsylvania and South Carolina, bars are still closed on election day until after voting is over. -- persuading them to get drunk, whereby they may lose sight of the object of an election -- flattering and gulling the people with empty professions of extraordinary devotion to their interests, &c. These means when artfully employed generally answer the desired end. Twenty years ago the practice was unknown in Edgecombe, and was considered as the reproach of some of our neighboring counties. It has since those days been introduced as a refinement -- but as the first attempts at this innovation it was viewed as an indication of distrust to the sober judgment of the people. But so fascinating was the liquor that its use on these occasions became fashionable, and popular among all classes, and a liberal distribution of it became necessary to a man's election....

There are seventeen county schools in the county, at which are about 400 scholars; nothing more is attempted to be taught in them than the elements of reading, writing and arithmetic, and but few of the teachers are qualified to do justice to those. Nothwithstanding this apparently infant state of literature, we may easily discover that it is progressing; for fifty years ago there was not more than one or two schools in the limits of the whole county. For want of an academy in this county several have sent to those in the adjacent ones, viz: At Westrayville and Vine Hill. It is in prospect to establish an academy at Mount Prospect, in this county, and we can not account for the delay otherwise than for the general indifference with which learning is still viewed.

It is to be apprehended that in this country general knowledge will never characterize many of its citizens as long as the dead languages are viewed as the basis of a liberal educationThe "dead languages" are Latin and ancient Greek. In the eighteenth and early nineteenth centuries, it was assumed that an educated man would know at least Latin and probably also in Greek, so that he could read the literature of the Classical Age -- the philosophy, science, history, speeches, and literature of ancient Greece and Rome. Here, Battle is complaining that many people who might seek a liberal education were discouraged by the need to learn these languages that no one spoke any longer (and so were "dead").. This county has never been prolific in men of talents, or they have been obscured for want of opportunities of education....

We have but few more of literary talents in the county; the means of education having heretofore been much circumscribed; we have more now, however, than at any former period; and we have never been destitute of men in whom we could confide our interests. Before the establishment of our University no children were sent out of the county to any college or academy.

At present there is only one professional law character in the countyThat is, there is only one lawyer in the county. You might wonder whether Battle means anything by calling him a "professional law character" -- is he being sarcastic?, and he a native of the county; but there are more physicians than at any former period, who can not boast, however, of great erudition. Quacks are abundant and are privileged to boast.

It is believed that about two-thirds of the people generally can read; and one-half of the males write their names, but not more than one-third of the women can writeReading and writing were taught separately. It was considered much more important for a person to learn to read than write because it allowed him or her to read the Bible. Historians often estimate literacy rates by the number of people who were able to sign their names on marriage certificates or other legal documents, but this is controversial since more people (especially women) could read than could write their names.. The girls now at school are learning and are very desirous to write; it is deemed a more important accomplishment in that sex, among the common people now than formerly.

The progress of learning for twenty-five years back has been slow, and perhaps has not more than kept pace with the population, till within these two or three years. The people now manifest some disposition to diffuse learning; perhaps from their finding the means of obtaining it more accessible now than heretofore. The custom at the public schools, and in some towns, among those who are desirous of intellectual improvement, has found its way here. Societies have been formed Societies were groups or clubs dedicated to learning. Throughout America, the most popular types of Societies were Literary (reading) and Natural Sciences (the study of local plants and animals), or History Societies. People would read different books on the subject, or they might conduct their own studies of nature, or write history essays., and kept up with a tolerable degree of spirit, greatly to the benefit of the members thereof, both in talents and morals. Novelty is a great matter here. We are generally ready to encourage any new institution that promises beauty or utility, but when it becomes familiar we grow indifferent.

Three or four years ago a subscription was set on foot for establishing a free schoolSince schools were not funded by the state, money to build them would have been raised through "subscriptions" in which people in the community pledged donations of money. for the education of poor children in the county -- two or three hundred dollars were soon subscribed. A few children received the benefit of this subscription (for it never became an institution) but as the matter never got into proper hands it languished and died. But unhappily for want of sufficient interest in literary pursuits, and perhaps for want of a more permanent residence of many who compose these societies, they have generally languished in a few months, and are with difficulty sustained. Some attempts have been made to procure libraries, but this for some of the above reasons, was never effected, except by a society that was in existence about fifteen years ago. On the dissolution of that body the books were scattered abroad, or divided among those who contributed to the establishment. The agricultural society has appropriated a sum of money to procure an agricultural library. Some donations are made of books for this purpose. On the fourth day of July, 1810, proposals were made for the establishment of a society for the promotion of agriculture and the arts. The plan has succeeded, so far as to go into operation. It has now upwards of thirty respectable members, whose public spirit is thus manifested, greatly to their benefit, and it is hoped to the benefit of the county.... 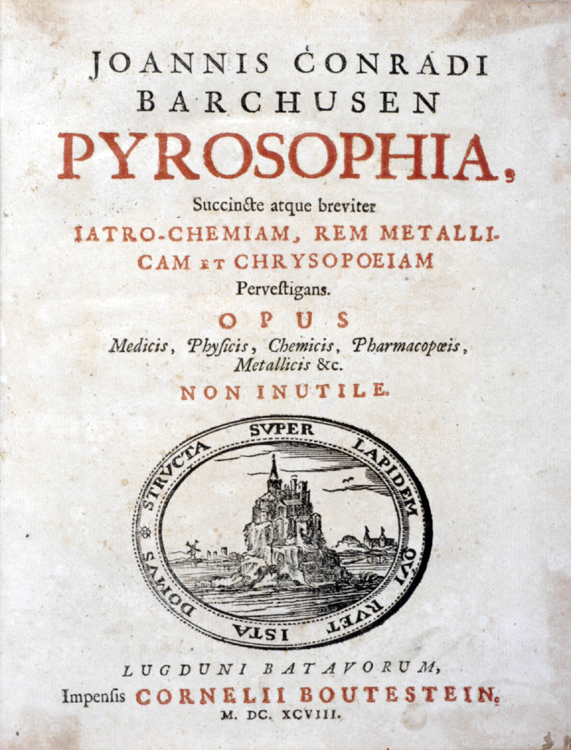 The title page of this 1698 chemistry book is in Latin, one of the "dead languages."