Shortly after the First Battle of Bull Run (Manassas), Vincent Colyer founded the United States Christian Commission to provide religious support to U.S. troops. After the Union victory at New Bern, General Burnside appointed Colyer “Superintendent of the Poor in the captured territory.” Colyer’s major responsibility was employing the thousands of slaves who had escaped to the Union lines, where they knew they would be free.

In 1864, Colyer published Brief report of the services rendered by the freed people to the United States Army, in North Carolina where he wrote about his experiences while living in North Carolina. In this excerpt, Colyer describes the number of slaves that fled to New Bern, their contribution to the Union war effort, and their gratitude to Union troops for liberating them from slavery. An excerpt of Colyer's Brief report is below.

I commenced my work with the freed people of color, in North Carolina, at Roanoke Island, soon after the battle of the 8th of February, 1862, which resulted so gloriously for our country.

A party of fifteen or twenty of these loyal blacks, men, women and children, arrived on a "Dingy" in front of the General's Head Quarters, where my tent was located. They came from up the Chowan River, and as they were passing they had been shot at by their rebel masters from the banks of the river, but escaped uninjured.

They were a happy party, rejoicing at their escape from slavery and danger, and at the hearty welcome which was at once extended to them, by the officers and men of the New England regiments, which chiefly made up the corps under Gen. Burnside's command.

It rained hard that night, and shelter being rather scarce on that Island, I gave up my tent to the women and children, and found quarters for myself with a neighbor.

The calm trustful faith with which these poor people came over from the enemy, to our shores; the unbounded joy which they manifested when they found themselves within our lines, and Free; made an impression on my mind not easily effaced. Many of the officers, notwithstanding the rain, gathered around the tent to hear them sing the hymn, "The precious Lamb, Christ Jesus, was crucified for me."...

Their numbers in the Department of N. Carolina, Were As Follows;

The work they did.

In the four months that I had charge of them, the men built three first-class earth-work forts: Fort Totten, at Newbern -- a large work; Fort Burnside, on the upper end of Roanoke Island; and Fort [?], at Washington, N. C. These three forts were our chief reliance for defence against the rebels, in case of an attack; and have since been successfully used for that purpose by our forces under Major-Generals Foster and Peck, in the two attempts which have been made by the rebels to retake Newbern.

The negroes loaded and discharged cargoes, for about three hundred vessels, served regularly as crews on about twenty steamers, and acted as permanent gangs of laborers in all the Quartermasters', CommissaryThe commissary was the cafeteria or kitchen for the army. and Ordinance Offices of the Department. A number of the men were good carpenters, blacksmiths, coopers, &c., and did effective work in their trades at bridge-building, ship-joiningA ship joiner is a person who builds or assembles the interior of a ship, such as cabins and rooms., &c. A number of the wooden cots in the hospital, and considerable of the blacksmith and wheelwright work was done by them. One shop in Hancock Street, kept by a freedman, of which the engraving on another page gives a fair picture, usually presented a busy scene of cheerful industry. The large rail road bridge across the Trent was built chiefly by them, as were also the bridges across Batchelor's and other Creeks, and the docks at Roanoke Island and elsewhere. Upwards of fifty volunteers of the best and most courageous, were kept constantly employed on the perilous but important duty of spies, scouts, and guides. In this work they were invaluable and almost indispensable. They frequently went from thirty to three hundred miles within the enemy's lines; visiting his principal camps and most important posts, and bringing us back important and reliable information. They visited within the rebel lines Kingston, Goldsboro, Trenton, Onslow, Swansboro, Tarboro and points on the Roanoke River: often on these errands barely escaping with their lives. They were pursued on several occasions by blood-hounds, two or three of them were taken prisoners; one of these was known to have been shot, and the fate of the others was not ascertained. The pay they received for this work was small but satisfactory. They seemed to think their lives were well spent, if necessary, in giving rest, security and success to the Union troops, whom they regarded as their deliverers. They usually knelt in solemn prayer before they left, and on their return from these hazardous errands, as they considered the work as a religious duty.

Their services as spies.

One morning, in the beginning of this pioneer duty, the provost Guard in front of my door told me that two negro spies sent by the rebels into our lines, had been caught by our pickets. I had sent two men to Kingston, with instructions that they should report only to me; on their return they were examined by the pickets and officers of the outposts, who, ignorant of our doings in this way, and completely mystified by the negroes, sent the two men under strong guard to General Foster. The General himself, not having been told by General Burnside of the authority which had been given to me, of sending out men on these expeditions, was going by my door at the time the guard were passing with these men. For convenience he brought them into my office; when, to my astonishment I found that the noted negro prisoners, of whom I had heard early in the morning were my two men. So faithful were they to my order, that though subjected to suspicion and indignity all the morning, from their own friends, they had not betrayed their trust....

The name of one of these two faithful men who thus opened the way for the carrying on of this important service—was Furney Bryant. At that time now two years ago, he did not know a letter of the alphabet, and he came within our lines dressed in the rags of the plantation. He attended my schools and after I left Newbern, on the formation of the 1st North Carolina Colored Reg't, he enlisted, and with his regiment was ordered for duty with General Gilmore off Charleston; where his gallantry and intelligence caused him to receive the appointment of 1st Sergeant, and a leave of absence of thirty days. On his way home to Newbern he came to New York city and called on me. The contrast in his personal appearance, in his new suit of Army blue, was not more remakable than the following letter received from him since his return to duty, proves his growth in the knowledge of letters to be. Let no one say that freedom is not better than slavery, with such examples before them.

In company with three other soldiers of his regiment, he arrived in Newbern in time to participate in the defence of that place against the recent desperate attack of the rebels in February, 1864. The engraving represents him, in company with Corporal Owen Jones heroically defending his native town, and the government which had set him free, against the secessionists.

In a few lines, I will inform you that I am in good health. I am happy in having the pleasure of writing to you while studying over all the care and affection which you have shown towards the colored people. I do say, and truly believe, that you will have your reward in Heaven.

I hope that God will prosper you in all your undertakings and that you may forever find pleasure in your duties, looking unto God.

I trust to meet you and your kind brother-in-law, Mr. Geo. Hancock, in this world, but if I should not, then I hope to meet you in Heaven.

It was my desire to have called upon you again before I left New York, but the steamer left so hurriedly we could not. Sergeant Lewis Bryant, Corporal Owen Jones, William White and John Hatch send their love. Bringing my letter to a close, in reading over all I have written I can only say, Amen. 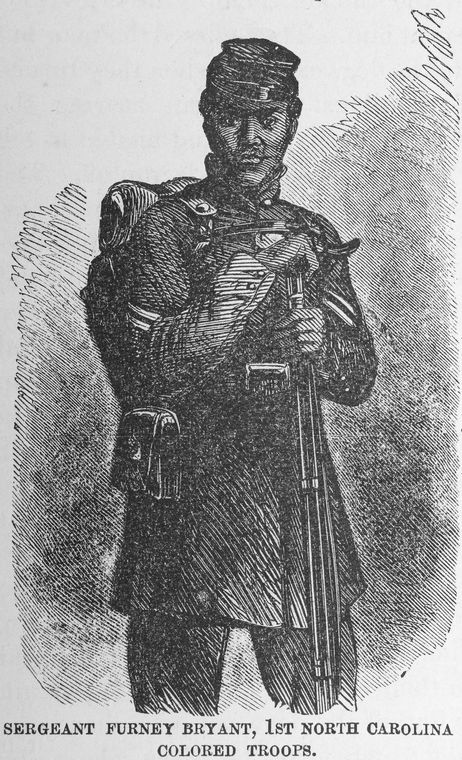 Contrabands, the term given to enslaved people who escaped to freedom through Union lines.

Battle of Roanoke Island, the February 8, 1862 battle discussed by Colyer.

Broadside encouraging men of color to join the Union Army in 1863. Includes excerpts of relevant legislation and quotations from officials. Courtesy of the National Archives.

Black Soldiers in the Civil War, from the National Archives