The Growth of Tourism: Warm Springs

American Indians had been aware of “hot springs” in the moutains of North Carolina, and colonial traders soon found them as well. People with illnesses and disabilities, believing that the mineral-rich waters would cure them, began traveling over the mountains to bathe in them as early as 1778.

During the eighteenth and nineteenth century in Europe and America, people believed that “taking the waters” — bathing in and drinking mineral water — could cure a variety of ailments, including kidney and liver complaints, cancer, malaria, and “weakness of women.” At medicinal spas, people bathed in a series of pools, ranging in temperatures from cool to hot, to purify the body, balance the body’s temperature, and restore health and vigor.

People quickly found that they could make money from tourists. In 1791, William Nelson bought the property around the present-day town of Hot Springs and started providing food and accommodations to visitors. After the Buncombe Turnpike came through in 1828, James Patton of Asheville bought the springs and built the Warm Springs Hotel with 350 rooms. The railroad reached Warm Springs in the early 1880s, and the hotel’s new owners expanded it, as you can see from this brochure.

While spas were popular in Europe and parts of the United States from colonial times, the expansion of railroads across the United States made it possible for more people to travel to these locations and benefit from the supposed health benefits of mineral water. Middle-class and wealthy families traveled to mineral springs as preventative treatment, and believed that by “taking in the water” their families would remain strong and healthy. Other people traveled to the springs on the orders of their doctors, who believed that the spring water, combined with exposure to the outdoors and fresh air, would restore their patients’ health. For those who could not travel to the springs, bottles of mineral water were shipped and sold in stories in cities.

Spas and health resorts also became more popular during the late nineteenth century as a response to the growth of cities and factories. People (correctly) believed that exposure to the polluted air of cities and factory towns caused disease. People escaped urban centers to mineral springs and to other resorts in the country to help purify their bodies.

The original hotel burned in 1884, but was soon replaced by the Mountain Park Hotel, which added a golf course and continued to house guests until after 1910. When a new, hotter spring was discovered, the hotel’s owners changed the town’s name from Warm Springs to Hot Springs. Below is the text from an advertisement for the Warm Springs Hotel in Madison County, about 1880.

The Warm Springs, in a fertile Valley of more than a thousand acres of almost perfectly level land, on the French Broad River, near the Tennessee line, are surrounded on all sides by the highest mountain ranges East of the Mississippi River, presenting some of the most magnificent scenery in the United States. Points of interest, and places of delightful resort, mountain elevations from which the Tourist views the extended ranges of the Blue Ridge and Alleghany mountains, looking into six different States, all presenting Nature's finest panorama, are in close proximity to the Hotel, and none beyond a half day's ride. In its local surroundings, scenery, salubrity of climate, altitude, and perpetual freedom from fogs, dampness, and insect pests, this resort has no superior, and few, if any, equals in America.

The Colonnade, or French Broad Front, comprises what is called the "Main Building," and is 500 feet long, and three stories high, with wide gallery, open to top of second story, supported by thirteen magnificent columns. The Southern Extension is a three-story brick building, with Mansard roof, and double galleries all around. There is also a two-story Wing, 130 feet extending South. The Western Extension is a new three-story brick building erected in the winter of 1879-'80, 650 feet long, with galleries or verandas, running the whole length with each floor. This extension gives to the Warm Springs Hotel a main front of 1,200 feet, and these, all brick, constitute the buildings of Warm Springs Hotel, affording ample accommodations for 1,000 guests. These buildings are surrounded by large, beautifully shaded lawns, sloping down to the French Broad River in one direction, and touching Spring Creek, where it flows by, within thirty feet of the Western Extension. At the foot of the lawn, not fifty yards from the Hotel, Spring Creek and the French Broad unite.

Hotel Accommodations and Amusements. First-class in All Appointments.

The Hotel accommodations are first-class in every respect; in point of rooms, upholstery, outfit, table-fare and general accommodations, vastly superior to those of any Summer resort South of Long Branch and Cape May. Music and Dancing, Brass and String Bands, Boating, Fishing and Hunting, Riding and Driving, Bowling Alleys and Billiard Tables, Bathing and Mountain Rambling, with all the pleasures and diversions peculiar to watering places, are at the constant command of guests.

The Bath House has been thoroughly remodeled, ceiled inside, and painted throughout. New and elegant Dressing-rooms have been erected, for both Ladies' and Gentlemen's Baths. The new extensions include a well arranged Ladies' Parlor, fitted up with all the comforts and modern conveniences of a Ladies' Waiting-room, with a marble Fountain supplying both hot and cold drinking water, brought in pipes from the Warm Drinking Spring, and the cold water from the mountain cascade on the opposite side of the River. To the Gentlemen's apartment, in addition to a suite of elegant Dressing rooms, a new Reception room and shaving saloon has been erected, in which is placed a handsome Fountain of silver and marble, supplying hot and cold drinking water, and a shampoo spray, for water at any desired temperature.

The Tub and Shower Baths.

A series of bath-rooms, handsomely constructed and admirably furnished, for both Ladies' and Gentlemen's apartments, have been erected, with large, heavy silver trimmed French bathing tubs, handsomely encased in black walnut panel-work, manufactured expressly for the Warm Springs Company, and arranged for both hot and cold water, of which there is an abundant supply of both at the pleasure of the bather, which he can regulate, boiling hot, freezing cold, or tepid, by the touch of a button. The hot water is forced from the warm drinking spring by a model pump of new design, through a system of pipes constituting a model hot-water works. The cold water for the tub baths comes from the top of the mountains, through pipes under the bed of the river, a part of the system of water supply for the hotel. These elegant bathing tubs and their attachments, in position, cost near a hundred and fifty dollars each, and are not surpassed by the apparatus of any bath-house for public use in this country, and are not to be found at any other Summer or Winter Resort at the South.

The Pool Baths. Fountains of Health, Youth, and Beauty.

Curative Properties of the Waters. Specific in Most Cases of Chronic Disease.

The Warm Springs Baths are recommended in the treatment of the following diseases, and in most cases of chronic complaint will be found effectual: Rheumatism, Gout, Stiff Joints, Spinal Diseases, Sciatica, Lumbago, Paralysis, St. Vitus' Dance, and all Neuralgias and Nervous Affections; Bright's Disease, Diabetes, Goitre, Specific Locomotor Ataxy; Spurious Vaccinations, and all Blood Poisons, Alcoholism, and the use and abuse of Opiates; all diseases of the Kidneys and bladder; Uterine Diseases, as a class, especially Sterility and Climacteric ills; all Cutaneous Diseases, Scrofula, Ulcerations and Enlargements of the Glands, Catarrh or Ozaena, in all forms; General Physical Debility and mental Exhaustion; Malarial Poison, and every form of Liver Complaint; Syphilis, Mercurial Syphilis, and all types of Mercurial ills, together with such chronic diseases where alternant and eliminative agency affords relief.

Advertisement for the Warm Springs Hotel in Madison County, about 1880. 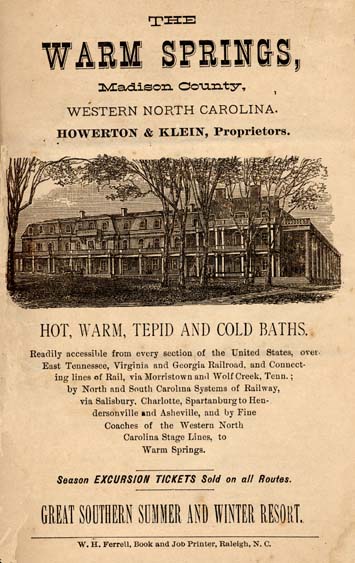 Title page for the Warm Springs Hotel Advertisement transcribed on this page, circa 1800. 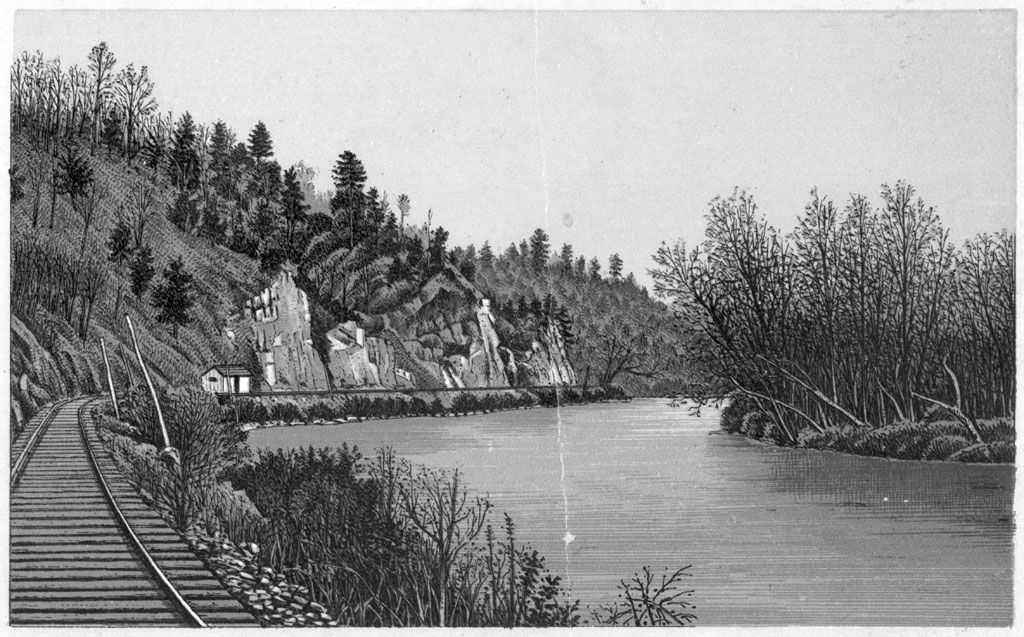 The Western North Carolina Railroad advertised places along its route through books of photographs like this one of the "View below Hot Springs."