Henry Grady and the "New South"

Henry Grady was born in Athens, Georgia, in 1850. His father, a successful merchant and major in the Confederate army, was killed during the siege of Petersburg in 1864. After the war, Henry Grady graduated from the University of Georgia and began a career in journalism. In 1874, he published an editorial in the Atlanta Daily Herald titled “The New South,” in which he argued that the South should develop its industries and railroads in order to rebuild its economy and society.

The editorial won him a wide audience and a job as managing editor of the Atlanta Constitution, which he used to promote industrial development. Although he died suddenly in 1889, he had great influence. His adopted home city of Atlanta fast became a symbol of the “New South” Grady championed.

In 1886, Grady spoke before a meeting of the New England Society in New York City. In his address, which we’ve excerpted here, Grady spoke about the idea of a New South and the need for unity between North and South.

In speaking to the toast with which you have honored me, I accept the term, "The New South," as in no sense disparaging to the Old. Dear to me, sir, is the home of my childhood and the traditions of my people. I would not, if I could, dim the glory they won in peace and war, or by word or deed take aught from the splendor and grace of their civilization—never equaled and, perhaps, never to be equaled in its chivalric strength and grace.

There is a New South, not through protest against the Old, but because of new conditions, new adjustments and, if you please, new ideas and aspirations. It is to this that I address myself, and to the consideration of which I hasten lest it become the Old South before I get to it. Age does not endow all things with strength and virtue, nor are all new things to be despised. The shoemaker who put over his door "John Smith's shop. Founded in 1760," was more than matched by his young rival across the street who hung out this sign: "Bill Jones. Established 1886. No old stock kept in this shop."

Dr. Talmage has drawn for you, with a master's hand, the picture of your returning armies. He has told you how, in the pomp and circumstance of war, they came back to you, marching with proud and victorious tread, reading their glory in a nation's eyes! Will you bear with me while I tell you of another army that sought its home at the close of the late war—an army that marched home in defeat and not in victory—in pathos and not in splendor, but in glory that equaled yours, and to hearts as loving as ever welcomed heroes home. Let me picture to you the footsore Confederate soldier, as, buttoning up in his faded gray jacket the parole which was to bear testimony to his children of his fidelity and faith, he turned his face southward from Appomattox in April, 1865. Think of him as ragged, half-starved, heavy-hearted, enfeebled by want and wounds; having fought to exhaustion, he surrenders his gun, wrings the hands of his comrades in silence, and lifting his tear-stained and pallid face for the last time to the graves that dot the old Virginia hills, pulls his gray cap over his brow and begins the slow and painful journey. What does he find—let me ask you, who went to your homes eager to find in the welcome you had justly earned, full payment for four years' sacrifice—what does he find when, having followed the battle-stained cross against overwhelming odds, dreading death not half so much as surrender, he reaches the home he left so prosperous and beautiful? He finds his house in ruins, his farm devastated, his slaves free, his stock killed, his barns empty, his trade destroyed, his money worthless; his social system, feudal in its magnificence, swept away; his people without law or legal status, his comrades slain, and the burdens of others heavy on his shoulders. Crushed by defeat, his very traditions are gone; without money, credit, employment, material or training; and, besides all this, confronted with the gravest problem that ever met human intelligence—the establishing of a status for the vast body of his liberated slaves.

What does he do — this hero in gray with a heart of gold? Does he sit down in sullenness and despair? Not for a day. Surely God, who had stripped him of his prosperity, inspired him in his adversity. As ruin was never before so overwhelming, never was restoration swifter. The soldier stepped from the trenches into the furrow; horses that had charged Federal guns march before the plow, and fields that ran red with human blood in April were green with the harvest in June; women reared in luxury cut up their dresses and made breeches for their husbands, and, with a patience and heroism that fit women always as a garment, gave their hands to work. There was little bitterness in all this. Cheerfulness and frankness prevailed. "Bill Arp" struck the keynote when he said: "Well, I killed as many of them as they did of me, and now I am going to work." [Laughter and applause.] Or the soldier returning home after defeat and roasting some corn on the roadside, who made the remark to his comrades: "You may leave the South if you want to, but I am going to Sandersville, kiss my wife and raise a crop, and if the Yankees fool with me any more I will whip 'em again." [Renewed applause.] I want to say to General Sherman—who is considered an able man in our hearts, though some people think he is a kind of careless man about fire—that from the ashes he left us in 1864 we have raised a brave and beautiful city; that somehow or other we have caught the sunshine in the bricks and mortar of our homes, and have builded therein not one ignoble prejudice or memory. [Applause.] But in all this what have we accomplished? What is the sum of our work? We have found out that in the general summary the free Negro counts more than he did as a slave. We have planted the schoolhouse on the hilltop and made it free to white and black. We have sowed towns and cities in the place of theories and put business above politics. [Applause.] We have challenged your spinners in Massachusetts and your iron-makers in Pennsylvania. We have learned that the $400,000,000 annually received from our cotton crop will make us rich, when the supplies that make it are home-raised. We have reduced the commercial rate of interest from twenty-four to six per cent, and are floating four per cent bonds. We have learned that one Northern immigrant is worth fifty foreigners, and have smoothed the path to southward, wiped out the place where Mason and Dixon's line used to be, and hung our latch-string out to you and yours. [Prolonged cheers.] We have reached the point that marks perfect harmony in every household, when the husband confesses that the pies which his wife cooks are as good as those his mother used to bake; and we admit that the sun shines as brightly and the moon as softly as it did "before the war." [Laughter.] We have established thrift in city and country. We have fallen in love with work. We have restored comfort to homes from which culture and elegance never departed. We have let economy take root and spread among us as rank as the crabgrass which sprang from Sherman's cavalry camps, until we are ready to lay odds on the Georgia Yankee, as he manufactures relics of the battlefield in a one-story shanty and squeezes pure olive oil out of his cotton-seed, against any downeaster that ever swapped wooden nutmegs for flannel sausages in the valleys of Vermont. [Loud and continuous laughter.] Above all, we know that we have achieved in these "piping times of peace" a fuller independence for the South than that which our fathers sought to win in the forum by their eloquence or compel on the field by their swords....

But what of the Negro? Have we solved the problem he presents or progressed in honor and equity towards the solution? Let the record speak to the point. No section shows a more prosperous laboring population than the Negroes of the South; none in fuller sympathy with the employing and land-owning class. He shares our school fund, has the fullest protection of our laws and the friendship of our people. Self-interest, as well as honor, demand that he should have this. Our future, our very existence depend upon our working out this problem in full and exact justice....

Under the old regime the Negroes were slaves to the South, the South was a slave to the system. The old plantation, with its simple police regulation and its feudal habit, was the only type possible under slavery. Thus we gathered in the hands of a splendid and chivalric oligarchy the substance that should have been diffused among the peopleAn oligarchy is a small group of people who rule a country — in this case, wealthy slaveholders. Grady calls them "splendid" and "chivalric" — recalling the romance chivalry of knights in medieval Europe. But he argues that their "substance" — their wealth, education, and leadership — should have been spread throughout the population....

The Old South rested everything on slavery and agriculture, unconscious that these could neither give nor maintain healthy growth. The New South presents a perfect democracy, the oligarchs leading in the popular movements social system compact and closely knitted, less splendid on the surface but stronger at the core—a hundred farms for every plantation, fifty homes for every palace, and a diversified industry that meets the complex needs of this complex age.

The New South is enamored of her new work. Her soul is stirred with the breath of a new life. The light of a grander day is falling fair on her face. She is thrilling with the consciousness of growing power and prosperity. As she stands upright, full-statured and equal among the people of the earth, breathing the keen air and looking out upon the expanding horizon, she understands that her emancipation came because in the inscrutable wisdom of God her honest purpose was crossed and her brave armies were beaten. 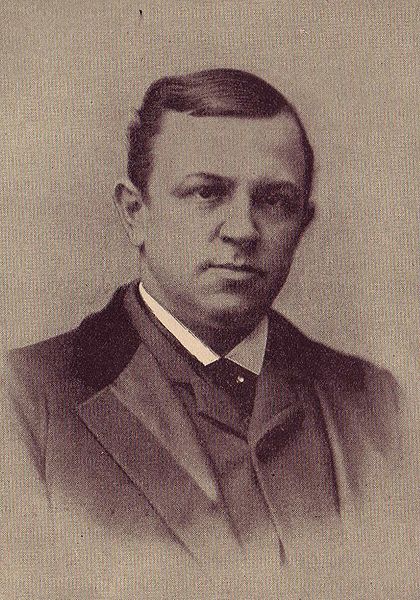 Henry Grady was a journalist and public speaker who believed that a “New South” should take its place in the Union. 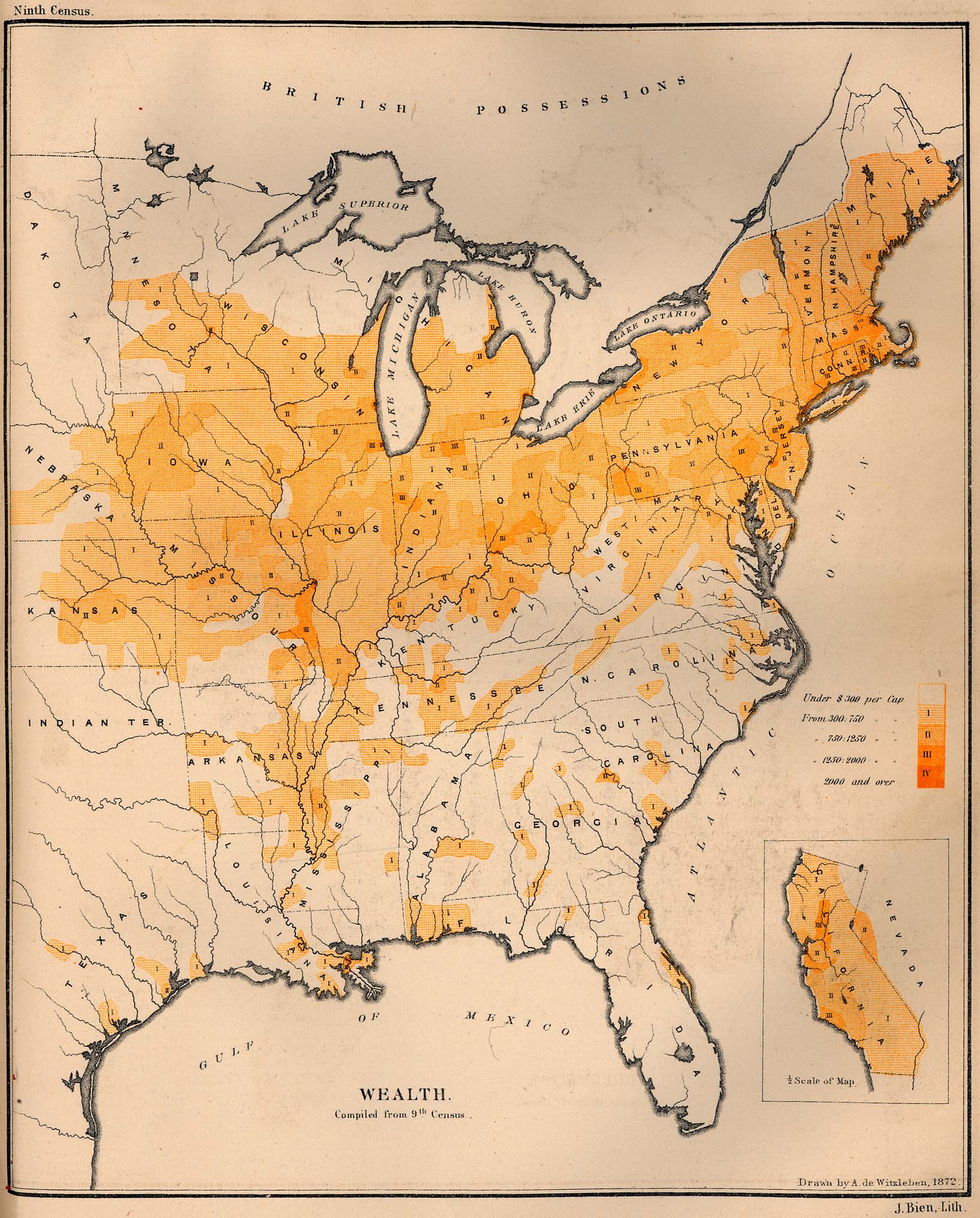 This 1872 map shows the distribution of per capita (per person) wealth in the United States. Why was it concentrated so heavily in the North? Which parts of North Carolina had the most wealth?