Of the Inlets and Havens of This Country

John Lawson served as the first surveyor-general of Carolina and explored areas from the coast to what we now know as the piedmont extensively. He published many of his findings in A New Voyage to Carolina in 1709.

Below are excerpts of A New Voyage to Carolina where Lawson details inlets of the North Carolina coast -- some of which no longer exist in the present day.

Currituck InletCurrituck Inlet no longer exists. It was an inlet through Currituck Banks (which Lawson refers to as the "bar of Currituck) in what is now eastern Currituck County. According to William Powell's North Carolina Gazetteer, the inlet was closed by a storm in 1828. 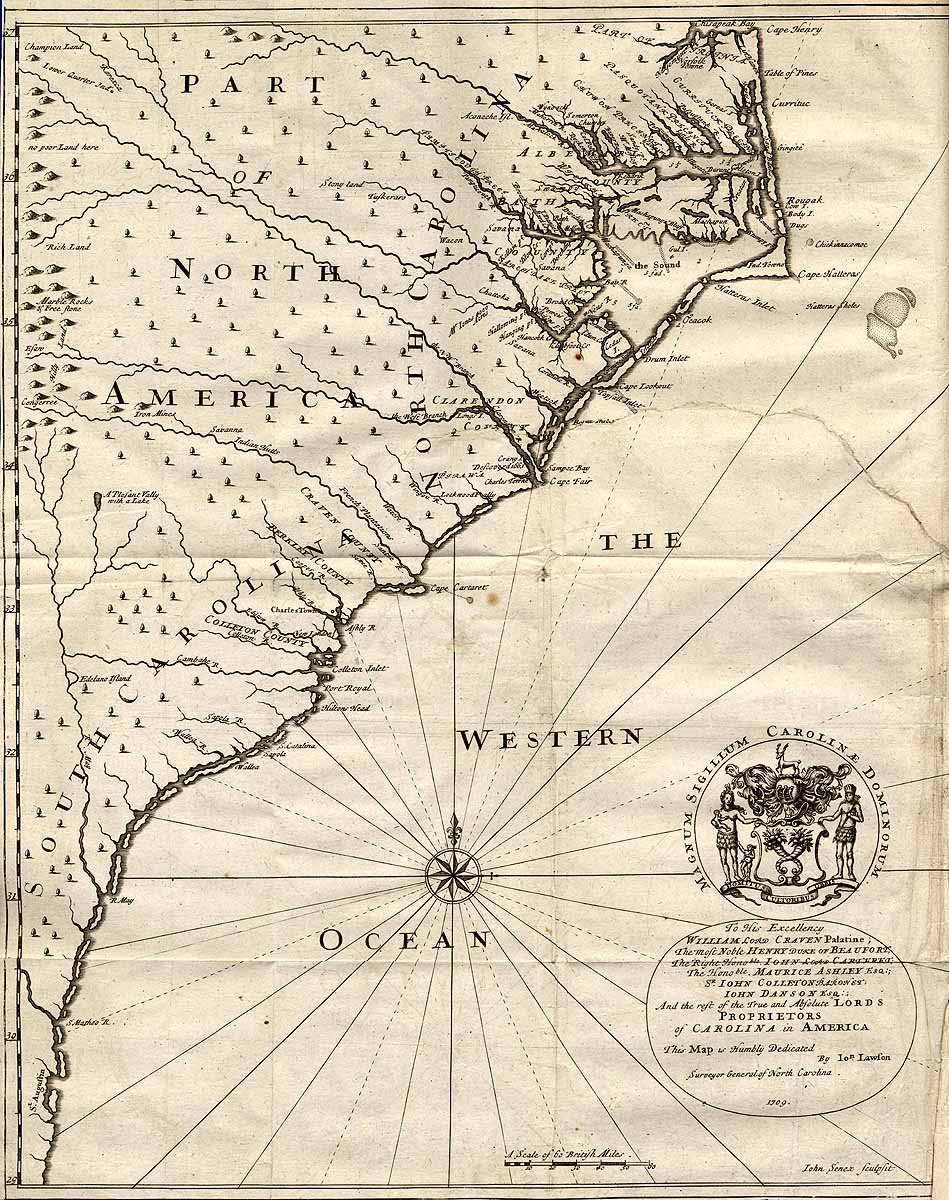 The BarIn this context, a "bar" is a bank of sand or silt across the mouth of a river or harbor, which obstructs navigation. of Currituck being the Northermost of this Country, presents itself first to be treated of. It lies in 36 deg. 30 min. and the Course over is S. W. by W. having not above seven or eight Foot on the Bar, tho' a good Harbour, when you are over, where you may ride safe, and deep enough; but this Part of the Sound is so full of Shoals, as not to suffer any thing to trade thro' it, that draws above three Foot Water, which renders it very incommodious. However, this affects but some part of the Country, and may be easily remedied, by carrying their Produce, in small Craft, down to the Vessels, which ride near the Inlet.

Ronoak InletLike Currituck Inlet, Roanoake Inlet no longer exists. According to the North Carolina Gazetteer, it was opened sometime before 1657 and closed by a storm in 1795.

Ronoak Inlet has Ten Foot Water, the Course over the Bar is almost W. which leads you thro' the best of the Channel. This Bar, as well as Currituck, often shifts by the Violence of the N. E. Storms, both lying expos'd to those Winds. Notwithstanding which, a considerable Trade might be carry'd on, provided there was a Pilot to bring them in; for it lies convenient for a large Part of this Colony, whose Product would very easily allow of that Charge; Lat. 35 deg. 50 min. 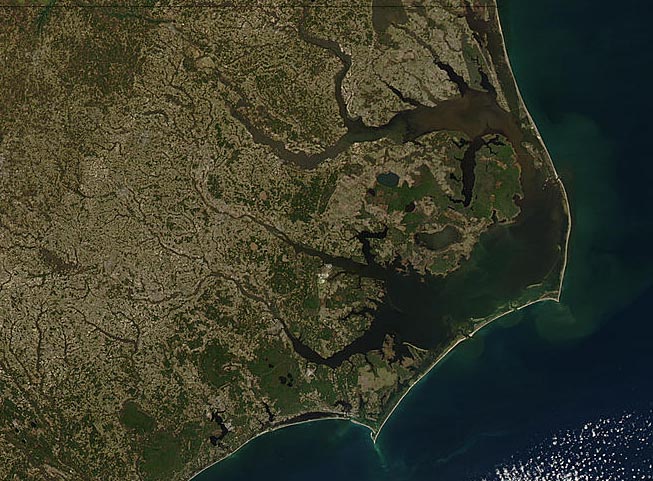 The Inlet of Hatteras lies to the Westward of the Cape, round which is an excellent Harbour. When the Wind blows hard at N. or N. E. if you keep a small League from the Cape-Point, you will have 3, 4, and 5 Fathom, the outer-most Shoals lying about 7 or 8 Leagues from Shoar. As you come into the Inlet, keep close to the South Breakers, till you are over the Bar, where you will have two Fathom at Low-Water. You may come to an Anchor in two Fathom and a Half when you are over, then steer over close aboard the North Shoar, where is four Fathom, close to a Point of Marsh; then steer up the Sound a long League, till you bring the North Cape of the Inlet to bear S. S. E. half E. then steer W. N. W. the East-point of Bluff-Land at Hatteras bearing E. N. E. the Southermost large Hammock towards Ocacock, bearing S. S. W. half S. then you are in the Sound, over the Bar of Sand, whereon is but 6 Foot Water; then your Course to Pampticough is almost West. It flows on these three Bars S. E. by E. ¼ E. about Eight of the Clock, unless there is a hard Gale of Wind at N. E. which will make it flow two hours longer; but as soon as the Wind is down, the Tides will have their natural Course: A hard Gale at N. or N. W. will make the Water ebb sometimes 24 hours, but still the Tide will ebb and flow, tho' not seen by the turning thereof, but may be seen by the Rising of the Water, and Falling of the same, Lat. 35° 20". 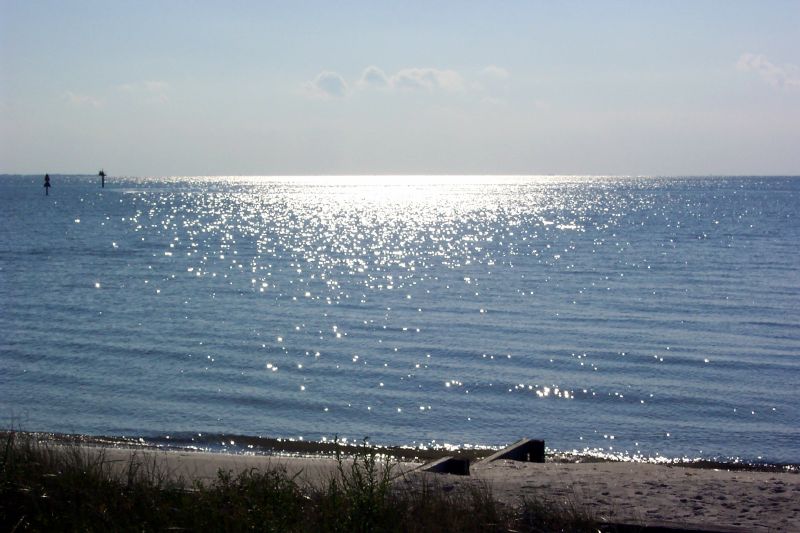 Ocacock is the best Inlet and Harbour yet in this Country; and has 13 Foot at Low-water upon the Bar. There are two Channels; one is but narrow, and lies close aboard the South Cape; the other in the Middle, viz. between the Middle Ground, and the South Shoar, and is above half a Mile wide. The Bar itself is but half a Cables Length over, and then you are in 7 or 8 Fathom Water; a good Harbour. The Course into the Sound is N. N. W. At High-water, and Neap-tides, here is 18 Foot Water. It lies S. W. from Hatteras Inlet. Lat. 35° 8".

Topsail Inlet is above two Leagues to the Westward of Cape Look-out. You have a fair Channel over the Bar, and two Fathom thereon, and a good Harbour in five or six Fathom to come to an Anchor. Your Course over this Bar is almost N. W. Lat. 34° 44".

The Sound of Albemarl, with the Rivers and Creeks of that Country, afford a very rich and durable Soil. The Land, in most Places, lies indifferent low, (except in Chuwon, and high up the Rivers) but bears an incredible Burden of Timber; the Low-Grounds being cover'd with Beech; and the High-Land yielding lofty Oaks, Walnut-Trees, and other useful Timber. The Country, in some Plantations, has yearly produc'd Indian Corn, or some other Grain, ever since this Country was first seated, without the Trouble of Manuring or Dressing; and yet (to all appearance) it seems not to be, in the least, impoverish'd, neither do the Planters ever miss of a good Crop, unless a very unnatural Season visits them, which seldom happensIn one of many comments on the remarkable fertility of North Carolina soil, Lawson notes the ability of the land to produce crops year after year, without the necessity of "manuring or dressing," by which he means applying manure or other fertilizer..

Lawson, John. A New Voyage to Carolina; Containing the Exact Description and Natural History of That Country: Together with the Present State Thereof. And A Journal of a Thousand Miles, Travel'd Thro' Several Nations of Indians. Giving a Particular Account of Their Customs, Manners, &c.: London: 1709.