Mary Slocumb at Moores Creek Bridge: The Birth of a Legend

Many legends have crept into our understanding of history. North Carolina has its share of legends, and some are associated with the state's most famous historical events. One of these legends is about the supposed heroic wartime actions of a woman named Mary (or Polly) Slocumb.

The story has been told, at least from the late 1840s onward, that Mary Slocumb had a dream that Ezekiel, her Patriot husband, has been badly wounded and bloodied in the Battle of Moores Creek Bridge on February 27, 1776 and rode through the night to be at his side there. The legend tells that she rode a horse through the night for some sixty miles to reach Moores Creek. She arrived there to learn that her husband was fine, so she cared for wounded Patriot soldiers.

Today we know there is virtually no documentary evidence to substantiate the tale. In fact, record show that both Mary and Ezekiel would have been about 15 years old at the time of the Battle in February 1776 and that Ezekiel did not enlist in the Continental Army until 1780.

Mary Slocumb's story appears to have entered the historical record in 1848 when she was included in a book titled American Women in the Revolution. The book was compiled by author Elizabeth Ellett and published in 1848, the same year that the woman's movement for rights and suffrage began to take shape in the United States with the Seneca Falls Convention in Seneca Falls, New York. The book recounts Mary Slocumb's dream and tale, relating that she told it to her doctor.

Below is a transcription of the legend as originally included in Elizabeth Ellet's 1848 American Women in the Revolution.

"The men all left on Sunday morning. More than eighty went from this house with my husband; I looked at them well, and I could see that every man had mischief in him. I know a coward as soon as I set my eyes upon him. The tories more than once tried to frighten me, but they always showed coward at the bare insinuation that our troops were about.

"Well, they got off in high spirits; every man stepping high and light. And I slept soundly and quietly that night, and worked hard all the next day; but I kept thinking where they had got to -- how far; where and how many of the regulars and tories they would meet; and I could not keep myself from the study. I went to bed at the usual time, but still continued to study. As I lay -- whether waking or sleeping I know not -- I had a dream; yet it was not all a dream. (She used the words, unconsciously, of the poet who was not then in being.) I saw distinctly a body wrapped in my husband's guard-cloak-bloody-dead; and others dead and wounded on the ground about him. I saw them plainly and distinctly. I uttered a cry, and sprang to my feet on the floor; and so strong was the impression on my mind, that I rushed in the direction the vision appeared, and came up against the side of the house. The fire in the room gave little light, and I gazed in every direction to catch another glimpse of the scene. I raised the light; every thing was still and quiet. My child was sleeping, but my woman was awakened by my crying out or jumping on the floor. If ever I felt fear it was at that moment. Seated on the bed, I reflected a few moments-and said aloud: 'I must go to him.' I told the woman I could not sleep and would ride down the road. She appeared in great alarm; but I merely told her to lock the door after me, and look after the child. I went to the stable, saddled my mare -- as fleet and easy a nag as ever travelled; and in one minute we were tearing down the road at full speed. The cool night seemed after a mile or two's gallop to bring reflection with it; and I asked myself where I was going, and for what purpose. Again and again I was tempted to turn back; but I was soon ten miles from home, and my mind became stronger every mile I rode. I should find my husband dead or dying -- was as firmly my presentiment and conviction as any fact of my life. When day broke I was some thirty miles from home. I knew the general route our little army expected to take, and had followed them without hesitation. About sunrise I came upon a group of women and children, standing and sitting by the road-side, each one of them showing the same, anxiety of mind I felt. Stopping a few minutes I inquired if the battle had been fought. They knew nothing, but were assembled on the road to catch intelligence. They thought Caswell had taken the right of the Wilmington road, and gone towards the northwest (Cape Fear). Again as I was skimming over the ground through a country thinly settled, and very poor and swampy; but neither my own spirits nor my beautiful nag's failed in the least. We followed the well marked trail of the troops.

"The sun must have been well up, say eight or nine o'clock, when I heard a sound like thunder, which I knew must be cannon. It was the first time I ever heard a cannon. I stopped still; when presently- the cannon thundered again. The battle was then fighting. What a fool! my husband could not be dead last night, and the battle only fighting now! Still, as I am so near, I will go on and see how they come out. So away we went again, faster than ever; and I soon found by the noise of guns that I was near the fight. Again I stopped. I could hear muskets, I could hear rifles, and I could hear shouting. I spoke to my mare and dashed on in the direction of the firing and the shouts, now louder than ever. The blind path I had been following brought me into the Wilmington road leading to Moore's Creek Bridge, a few hundred yards below the bridge. A few yards from the road, under a cluster of trees were lying perhaps twenty men. They were the wounded. I knew the spot; the very trees; and the position of the men I knew as if I had seen it a thousand times. I had seen it all night! I saw all at once; but in an instant my whole soul was centred in one spot; for there, wrapped in his bloody guard cloak, was my husband's body! How I passed the few yards from my saddle to the place I never knew. I remember uncovering his head and seeing a face clothed with gore from a dreadful wound across the temple. I put my hand on the bloody face; 'twas warm; and an unknown voice begged for water. A small camp-kettle was lying near, and a stream of water was close by. I brought it; poured some in his mouth; washed his face; and behold -- it was Frank Cogdell. He soon revived and could speak. I was washing the wound in his head. Said he, 'It is not that; it is that hole in my leg that is killing me.' A puddle of blood was standing on the ground about his feet. I took his knife, cut away his trousers and stocking, and found the blood came from a shot-hole through and through the fleshy part of his leg. I looked about and could see nothing that looked as if it would do for dressing wounds but some heart-leaves. I gathered a handful and bound them tight to the holes; and the bleeding stopped. I then went to the others; and-Doctor! I dressed the wounds of many a brave fellow who did good fighting long after that day! I had not inquired for my husband; but while I was busy Caswell came up. He appeared very much surprised to see me; and was with his hat in hand about to pay some compliment: but I interrupted him by asking—' Where is my husband?'

"'Oh, I thought,' replied I, 'you would need nurses as well as soldiers. See! I have already dressed many of these good fellows; and here is one' -- going to Frank and lifting him up with my arm under his head so that he could drink some more water -- 'would have died before any of you men could have helped him.'

"'I believe you,' said Frank. Just then I looked up, and my husband, as bloody as a butcher, and as muddy as a ditcher, stood before me.

"Why, Mary!" he exclaimed, 'What are you doing there? Hugging Frank Cogdell, the greatest reprobate in the army.'

"I don't care,' I cried.' Frank is a brave fellow, a good soldier, and a true friend to Congress.'

"'True, true! every word of it!' said Caswell. 'You are right, madam I with the lowest possible bow.

"I would not tell my husband what brought me there. I was so happy; and so were all! It was a glorious victory; I came just at the height of the enjoyment. I knew my husband was surprised, but I could see he was not displeased with me. It was night again before our excitement had at all subsided. Many prisoners were brought in, and among them some very obnoxious; but the worst of tories were not taken prisoners. They were, for the most part, left in the woods and swamps wherever they were overtaken. I begged for some of the poor prisoners, and Caswell readily told me none should be hurt but such as had been guilty of murder and house-burning. In the middle of the night I again mounted my mare and started for home. Caswell and my husband wanted me to stay till next morning and they would send a party with me; but no! I wanted to see my child, and I told them they could send no party who could keep up with me. What a happy ride I had back! and with what joy did I embrace my child as he ran to meet me!"

As told by Elizabeth F. Ellet in The Women of the American Revolution (New York: Baker and Scribner, 1849). - Original Source. 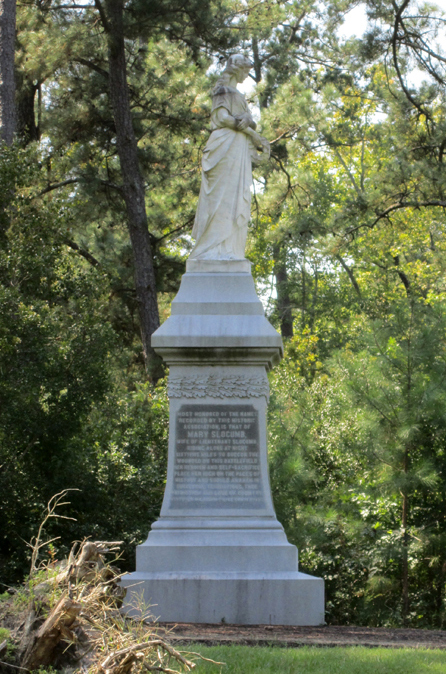 The Mary Slocumb Legend was preserved in popular memory and on the lanscape in a monument at Moores Creek Battlefield in Currie, N.C. Visit this link to learn more about the history of the 1907 monument. Site includes primary sources. 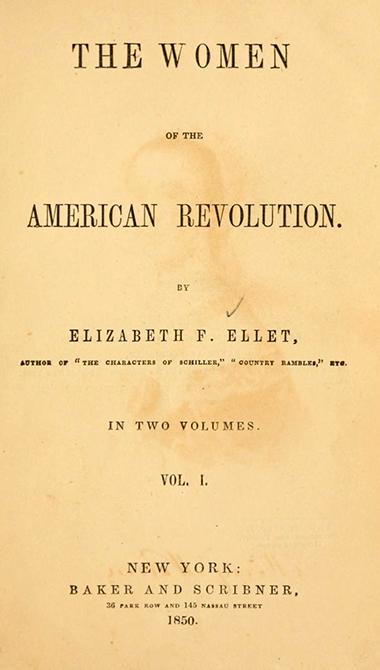 Read the account of Mary Slocumb at the Battle of Moores Creek Bridge in Elizabeth Ellett's 1848 book. 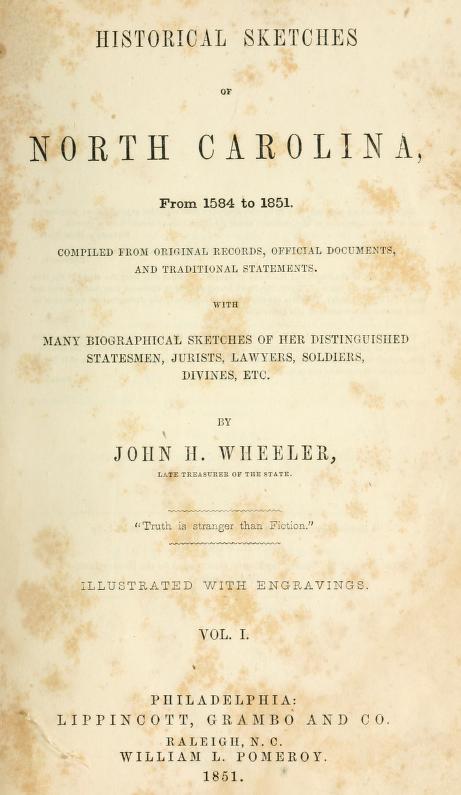 Read the account of Mary Slocumb at the Battle of Moores Creek Bridge in John Wheeler's 1851 book.

Mary Slocumb Legend: examine the evidence and decide for yourself