Major General Bryan Grimes, a Pitt County native and wealthy plantation owner, enlisted in the Confederate army in 1861. He remained with the army until the war’s end and escaped serious injury even though he had several horses shot out from underneath him.

In this letter to his daughter, written from Yorktown, Virginia in April of 1862, Grimes describes life in the Confederate army camp. His daughter was Elizabeth Davis Grimes, born in 1853.

Your letters Cannot find me So I will write to you in order that you may know where to direct your letters.... at present I am stationed at Yorktown with the enemy in front of us not more than 1200 yds distant who are continually shoveling their big shot at us/ just as I had written that Sentence a large bomb in weight much heavier than you, Came rushing through the air which made us all drop flat upon the ground and fell within our regimental Camp not more than thirty or forty yds from where I am writing/ Three hours have elapsed since I Concluded the last Sentence the shells and shot of the enemy became too frequent and in too close proximity to us to remain quiet.

So the regiment has been formed in what is called "line of battle," and all... the positions in which we were ordered to stand or die but the firing gets slower and slower and in Consequence we have broke ranks to get something to eat. what at home would be a dinner but now it is merely a "filling up" to appease the cravings of hunger.... What would you think to See great grown Men eating Molasses and Sopping it out of an Oyster shell? and being well satisfied to be able to procure it any way. Our spoons were made by ourselves from a splint of pine -- though for a week past we have had only Sassafras tea to drink and strange to say find it very palateable. We use Crackers... for plates and have found one great advantage in them that when we have finished all upon our plates -- we turn in and eat them.... You doubtless would laught heartily to See us eating our meals. We frequently have the Colonels and Generals to dine and we all have to take it alike.... all this can be stood much better than laying down upon the... ground or at best upon one plank with not a particle of Covering to keep me warm -- I frequently feel as tired when I wake as I did upon laying down and every bone in my body apparently grumbling at such rough treatment....

Dont you think we have hard times here -- with nothing to sleep upon & but little time to do it even if we had an abundance of Necessary Covering. What will you think when I tell you that only one night Since the 8th day of March have I taken off any of my clothing to go to sleep and that Now I sleep with boots and all and half the time with Sword and pistol attached to my person -- to be prepared to meet the foe at any Minute -- but little to eat and Nothing to eat it upon -- with the Yankees within 1/2 Mile shooting at us upon all occasions whenever we show ourselves -- Not since my arrival here on the 10th of April has there been two Consecutive hours without their firing into our Camp and Sometimes at the rate of fifty a Minute -- last Sunday night at about 2 O'Clock we all thought the battle was opened -- Such a hail storm of iron and lead I had never Conceived of.... If you wish to imagine how a bomb or shot Sounds as it Come whizzing through the air get Spelman to make you a "whirlgigA whirligig is an object that twirls, such as a top or a pinwheel. Grimes is probably referring to a spinning top, a toy that children played with." that children often play with and whirl it around a few times and then the noise that it makes somewhat resembles the Sound except that you can hear the ball -- that is a large one from a half Mile -- and have time to drop behind the breastwork for protection.... Write me immediately upon the receipt of this... be a good girl -- Remember me to all the family -- 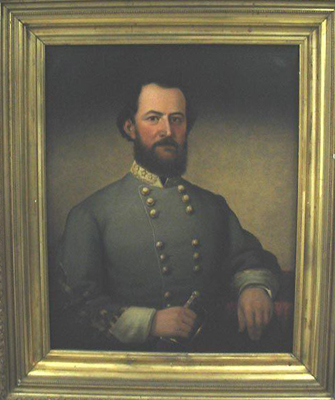