The North Carolina Oath of Allegiance

After North Carolina Seceded from the Union on May 20, 1861, new soldiers, politicians, and civil servants had to fill out and sign an oath of allegiance, by which they pledged loyalty to the state and renounced their loyalty to the United States. A transcription of the oath is below.

Having been appointed a

I do swear that I will be faithful and bear true allegiance to the State of North Carolina, and to the Constitutional powers and authorities which are or may be established for the government thereof, and maintain and defend the Constitution of the said State. So help me God.

Subscribed and sworn to before me,

NOTE. -- This leaf to be detached and sent to the Adjutant-General. 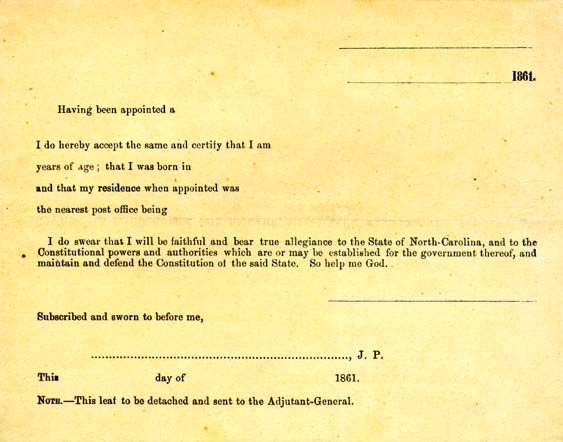 A copy of the North Carolina Oath of Allegiance.