The last event of any consequence that we were involved in from a combat standpoint was that we bombarded the Japanese town of Hitachi, Japan, and this is an industrial town on the coast north of Tokyo. It was a night bombardment. I think we were in company with two other battleships. This was carried out almost totally by radar. In other words, we couldn't see anything. Total darkness. But the points of reference were picked up on radar and we fired our main battery into Hitachi.

It was not really a great success. We hit some of the targets we were firing on, but some of our projectiles landed in residential areas and non-combat type situations. So we’ve now reached the point where it was August 1945 and the war was still going full blast. We were preparing to invade Japan and everybody thought that this was going to be a terrible invasion. It would be slaughter unbelievable because the Japanese were going to fight to the bitter end just like they did every island, every campaign that we’d been through. 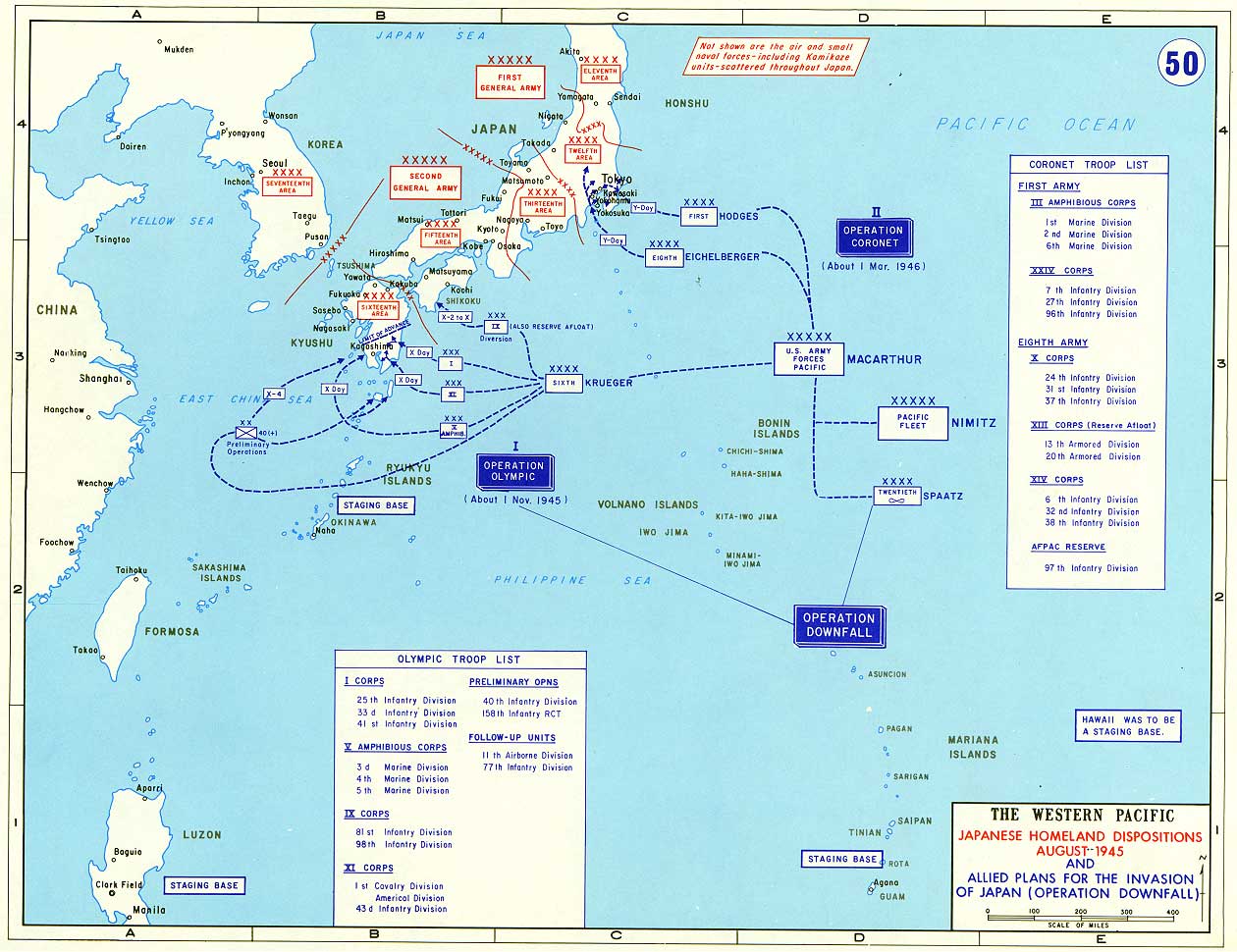 Allied plans for "Operation Downfall," the invasion of Japan, in August 1945.

There had been very few Japanese surrenders. Almost all of them would fight down to the death and/or they’d commit suicide at the very end. So the plans for the invasion of Japan were going forward and the war in Europe had ended so now they were transferring all the troops and ships from over there to the Pacific in preparation for this big event.

Well we dropped the atomic bomb and immediately, or almost immediately, I think the second bomb had to be dropped and finally the Japanese agreed that they would accept surrender terms. The task force commanders passed the word that they were going to need volunteers to go ashore as a occupation force from the ships until such time as Marines and Army could be brought in from other locations to do the permanent occupation.

So I volunteered along with about 100 other guys from our ship and we were equipped with full combat gear for a beach assault, packs, rifles, ammunition, canteens, all that paraphernalia that you take ashore with you and leggings, but we were dungarees, Navy dungarees and had helmets. We transferred to a fast transport. We transferred by breeches buoy.

Now this is an interesting exercise. You ride a little thing across between the ships. The ships are out at sea underway maybe 10 or 15 knots and you ride a little sling that takes you across from one ship to the other. You have to cross about 30 or 40 feet of open water, real exciting. All the time, you’re thinking the line is going to break and I’m going in and they’ll go off and leave me (laughter).

We got over and then we rode that little transport around for a week or so and then they announced that we were going to go ashore at Yokosuka Naval Base. Now this is the largest Japanese naval base in Tokyo Bay at a town called Yokosuka. Big place though. It’s on the same level as Pearl Harbor in size and capabilities. They’ve got four or five big dry docks and all kinds of machine shops and you name it for maintaining naval vessels.

We landed, we off loaded into landing craft. We had the drop nose on them and we went ashore just like landing in a combat situation. We had rifles, ammunition, everything else, but did not have the rifles loaded. We were told before we left the ship that there could still be Japanese fanatics that would decide that they were going to die for the emperor in that Navy yard.

They were supposed to be all gone, but we would be the first Americans there so we’ll find out if there are any of them there. So we were a little bit tense because we did not know, yeah, there may be some Samurai or kamikaze type guy that’s going do his last for the emperor. Well we didn't have any problems. We landed and the landing went without any hitches. We advanced across the ground to the first building that we came to and there was one Japanese sentry setting outside the building unarmed.

He looked at us terrified like we were going to kill him or something, but of course we weren’t going to do that. We just walked on by him, walked inside the building and looked around. It was really eerie because they had left like the left 30 minutes before we got there. The building was full of offices and every office had a desk of course and papers on it, things on the wall, typewriters, telephones, you name it. The whole place just looked like it was fully equipped and everybody just got up and walked out.

So we started scrambling through doors and things trying to find souvenirs which we were told don’t do that before we left the ship because it could be booby-trapped. Well temptation was too great. Some of us found a few things and then we went upstairs to the next floor. 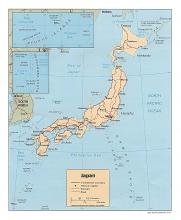 This 1996 map of Japan shows its major cities.