A Pledge to Violate the Stamp Act

In 1766, during the colonial protests of the Stamp Act, some residents of eastern North Carolina, including many colonial leaders, signed a pledge to refuse to pay the tax. Their pledge was published in Wilmington's newspaper the North-Carolina Gazette on February 26, 1766. Read the primary source transcription below. It includes annotations with historical commentary. 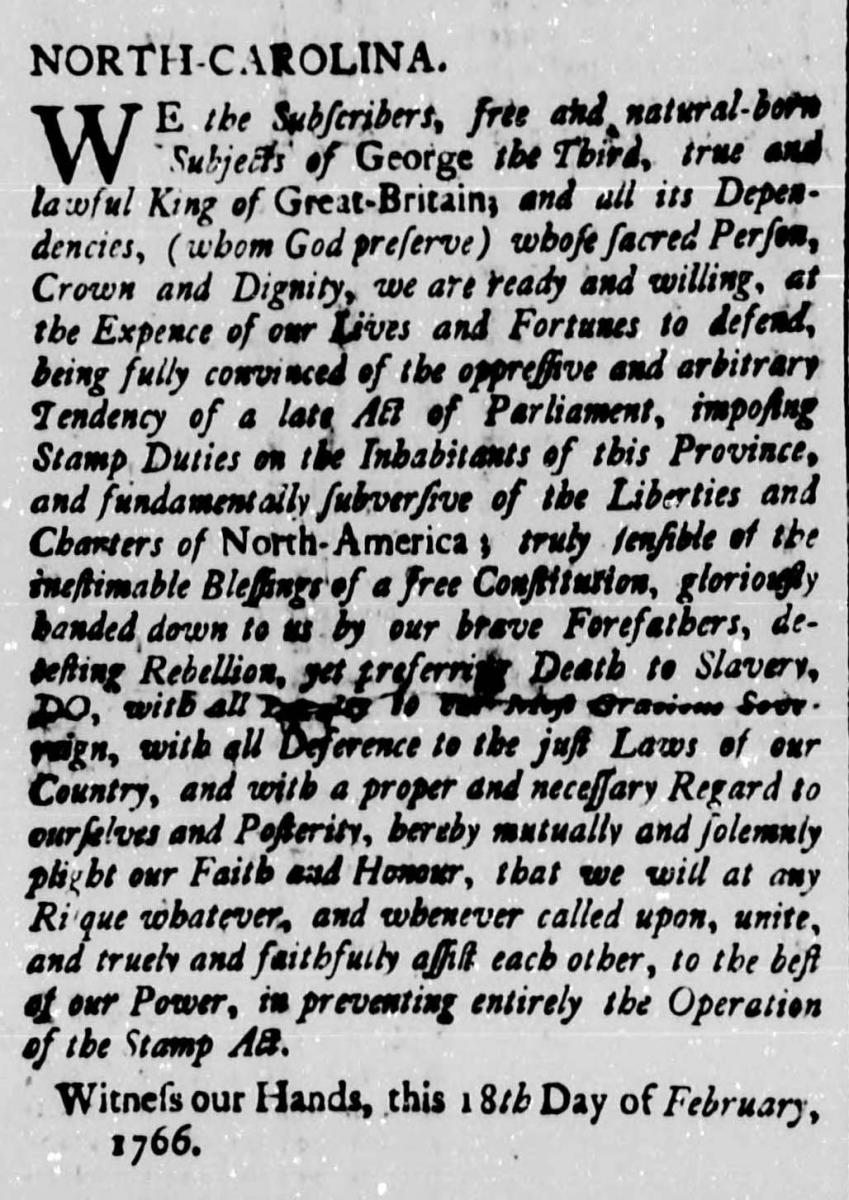 We the subscribersThe people signing this pledge subscribed to it in the way someone "subscribes" to a belief -- that is, they agreed to follow it., free and natural bornA natural born citizen of a country is someone who was born a citizen of that country, so the signers are saying that they are not immigrants from other countries but were born subjects of the British Empire. subjects of George the third, true and lawful KingWhy was it important to say that George III was the "true and lawful" king? of Great Britain and all its Dependencies (whom God preserve) whose sacred person, crown and dignity, we are ready and willing, at the expense of our lives and fortunes to defend, being fully convinced of the oppressive and arbitrary tendency of a lateLate here means recent. Act of Parliament, imposing Stamp duties on the inhabitants of this Province, and fundamentally subversive of the liberties and ChartersEnglish people and colonists in the eighteenth century used liberties much the way we use rights today -- to refer to a variety of things that by law and tradition they were able to do. Charters are fundamental laws, similar to a constitution. The word might refer to charters of colonies, but North Carolina's charter had long ago been revoked -- it was a royal colony. Since he says "the charters of North America" the author of this pledge may be referring to the charters of other colonies, such as Massachusetts. He may also be referring to important laws and precedents in North Carolina that guaranteed citizens the right to a voice in their government. of North America; truly sensible of the inestimable blessings of a free Constitution, gloriously handed down to us by our brave ForefathersThe English (or British) Constitution was, and is, a collection of fundamental laws through the centuries, not a single founding document like the Constitution of the United States that lays out all of the functions and powers of a government. The two most important laws in the English "constitution" were the Magna Carta (or "great charter") of 1215 and the Bill of Rights of 1689. Both guaranteed certain rights to British subjects, including the right to a say in their government., detesting Rebellion, yet preferring death to slaveryIt was common in the eighteenth century for English people to refer to anyone who did not share their rights and liberties as a slave. Why might American colonists have used this word so frequently in their protests against acts of Parliament?, Do, with all loyalty to our most gracious Sovereign, with all deference to the just Laws of our Country, and with a proper and necessary regard to ourselves and PosterityPosterity means future generations. By mentioning posterity, the signers are saying that they feel responsible to their children and their children's children, and that they are willing to fight and sacrifice for them., hereby mutually and solemnly plight our faith and honourPlight here means pledge. By pledging their honor, they were saying that if they broke their pledge, they would lose honor, or their reputation as men., that we will at any risque whatever, and whenever called upon, unite, and truly and faithfully assist each other, to the best of our Power, in preventing entirely the operation of the Stamp Act. 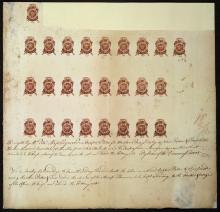 A proof sheet of one-penny stamps to be used on newspapers, pamphlets, and all other papers. 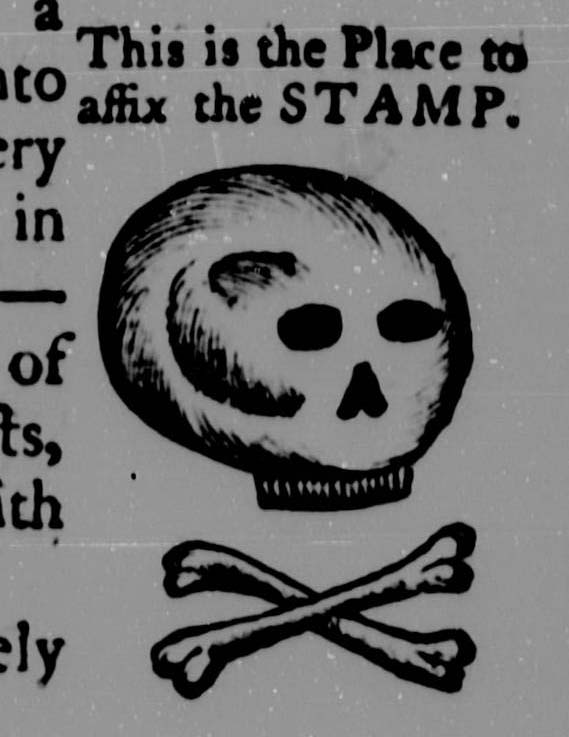 Image of the "death's head" stamp or the "fatal" stamp. Many printers responded to the Stamp Act by replacing the required paper stamps with cartoons like this one from the North-Carolina Gazette.