On the Road with Jane Caroline North

Jane Caroline North was born to a wealthy family in Charleston, S.C and later married Charles Lockhart Pettigrew, a member of a prosperous planter family in Washington and Tyrell counties.

In this excerpt from her diary of 1851, North describes her experiences traveling from South Carolina to Virginia to the mineral springs of western Virginia. Part of her route ran through North Carolina, and although she was able to travel part of the way by railroad, the excerpts below from her diary show how complicated travel could be in the 1850s, even for the wealthy after the advent of the Railroad.

Uncle Henry Aunt Harriette the two children myself & Betsey as attendant left Charleston on Board the Wilmington Boat Vanderbilt at 4 o’clock p.m. Many persons on board among them several acquaintances—

We had a disagreeable night, it rain thundered and lightened the whole time. Fortunately for us we were accommodated with a State roomA state room on a boat or ship is a first-class cabin, one of the best rooms available. on deck, the weather was very hot and if we had been moved into the berths below the Saloon, would certainly have been near the end of our days before morning. As it was we suffered sharply -- SmithvilleSmithville Township is located in Brunswick County, North Carolina. It is a seaport town on the border between North and South Carolina. is the most desolate looking spot shabby houses and piles running out into the river giving an appearance of decay & at the same time reminding me of what I read of Old Dutch towns with their defences projecting into the sea. Wilmington is a considerable place, somewhat resembling GeorgetownGeorgetown, South Carolina, is a seaport sixty miles north of Charleston. It is one of the oldest cities in South Carolina. except it has a prosperous air. We went from the Boat to the CarsRailroad cars., on board which we waited an hour or more, finally set off. The country is a dead level, pine trees, grass and turpentine barrels rolled beside the road ready for export -- certainly this portion of N. Carolina does not make the most favorable impression. We passed over beautiful SavannaThe savanna, or grassland, she saw was the longleaf pine savanna. In this now-rare type of forest, which once covered much of the southeastern United States, tall longleaf pines grew spaced far enough for a carriage to pass easily, with grasses and wildflowers between them. cover’d with grass and wild flowers, bordering the road for ½ mile on each side & only bounded by the horizon one very fine orchard, & one fine field of corn were the only interesting objects I saw in the distance of 166 miles or more! We supped at Weldon where we changed for Petersburg Va -- There are opposition houses at Weldon much to the advantage of travelersAn opposition house was a "house" or hotel providing accommodations to travelers, set up in opposition to (in competition with) the main hotel of a town or village. She is saying that the competition has improved services to travelers. -- we had a nice supper & capitalCapital was a way of saying "excellent." tea at Greshams. From eight until after 12 o’clock at night we were in the cars going from Weldon to Petersburg. There was a shelf sufficiently wide for a person to be comfortable upon extending around the [illegible] above the seat, on this as many men as could get on it were sleeping while those who could accommodate themselves upon the seat. We had every variety of attitude, some highly ridiculous. At Petersburg we rested 2 hours then took the Cars for Richmond. I was surprised to find this route so good, having always been told that it was the worst in the Union. 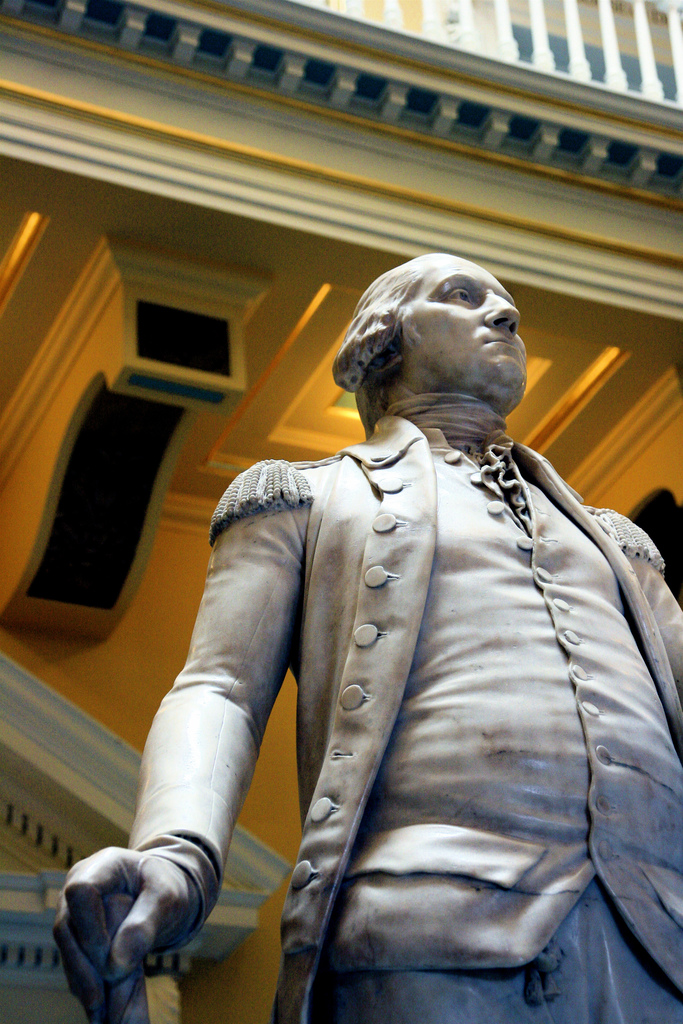 We took the Cars for Charlottesville this morning arrived to dinner -- the hotel was a most distracted place; ill furnished, poorly kept -- The dinner was a scene of confusion & discomfort -- the landlord before the bell rang requested anxiously that the ladies would seat themselves at table otherwise they would get no seats after that. Soon as the summons rung out (we being established before hand,) such rushing in of rough looking men I never saw. Oh! They were desperate specimens -- it was Court week & the town was filled with all sorts of queer, hard visaged people -- they ate furiously & everything together. I was amazed at being handed ice-cream after dinner, it was like a gleam of civilization in the midst of barbarism. Uncle Henry engaged an extra with Dr. Holmes, & as soon as possible we set off for Brooksville 20 miles distant. We passed the University a mile from the Town, it is a handsome building. Our party consists of Dr Holmes & wife, Jr John Gadsden who is traveling with them, and ourselves.

Left Brookville (merely a way side hotel) for StauntonStaunton, Virginia, is about fifty miles east of Charlottesville. early, we were today fairly among the Blue Ridge, they certainly correspond to the name, tho’ I don’t know that they looked any more blue than other mountains, the country until we entered the mountainous regions was destitute of any beauty, today we have had several pretty scenes, & glimpses of the more distant ranges, looming through their "azure hue." Dined at Staunton, the situation of this town is very striking, among steep hills with the Mountains beyond. On each side of the street entering the Town are handsome public buildings on the asylum for the deaf & dumb the Principals of which are a gentleman & his wife both deaf & dumb -- I did not hear what the opposite building was intended for. The hotel was a nice one & the arrangements appeared very comfortable, the dinner well conducted and very good. I saw white waiters for the first time since entering Virginia here at the hotel of this inland Town perched among the high hills bordering the mountain country. This is a flourishing place, & when the rail road is finished connecting it with Charlottesville, it doubtless will be of great importance. We passed today a place where they are tunneling thro’ a mountain; the work has been in progress three years, and will be finished it is said in one more, the embanking for the railroad is finished in many places, it was a great work to undertake, filling up sufficiently in the valleys tunneling thro a mountain and overcoming many obstacles they have had to encounter in the route. We changed the stage at Staunton, & left in a rain, the distance to CloverdaleCloverdale, Virginia is 78 miles southwest of Stauton. being 30 miles -- fortunately it soon cleared, we traveled well but it was ten o’clock at night before we reached our resting place. We were very tired -- the children had been asleep two or three hours before we stopped, they have stood the journey very well so far.

We did not leave Cloverdale until nine o’clock having but 20 miles to the Warm SpringsWarms Springs, Virginia is about 100 miles west of Charlottesville.. The road is turnpike it is made over the mountains nearly the whole way, & commanding beautiful points of view & in excellent order. From one height I was reminded of the view of Caesar HeadCaesar Head is a mountain near Cleveland, South Carolina. It is located approximately 45 miles south of Asheville., tho it was neither so fine nor so extensive. After a drive of 15 miles we drove into the "Bath Alum Springs" where the horses were to be watered. These Springs have not been discovered long, this is only the second season. The hotel is of red brick the cottages are pretty little buildings, but must be very hot. The sun was shining his fiercest as we drove up, and the bricks seemed to me really flaming. In a book on the Virginia Springs by Dr. BurkeIn 1832, William Burke published a book titled The Mineral Springs of Western Virginia., he describes these of Bath AlumBath Alum is a town near Warm Spring and Hot Springs, Virginia. Alum is a type of mineral salt, for which the baths were named. as very delightful & gives the most refreshing account of the trees & ornamental grounds, the shrubbery &c I looked in vain for any semblance of all this, a row of bare poles & a carriage way comprised every beauty to be seen. He drew from that never failing source an Irish imagination. At length at 4 o’clock in the afternoon we arrived at the Warm Springs, I felt a little scared I must admit when we got out dusty, weary & travel worn and saw people standing about, on the staircase we met a lady dressed in white bobbinetBobbinet is imitation lace made from cotton. & looking so nice that I thought it would be a desperate undertaking to prepare for dinner, so weary as we were. This trouble was removed to my satisfaction when I found that the hour for dinner had long passed & we were only with our own party. Dressed for the eveningWealthy Europeans and Americans at this time dressed formally for dinner., few people here -- some old gentlemen & ladies chiefly.