Rural free delivery is as yet so much of a novelty in this country that when, a few months ago, a rural mail carrier in Michigan invited me to spend a day driving with him over his thirty-mile route, I was glad to avail myself of the opportunity which his invitation afforded me to see something of the actual working of a system which in about five years has grown from an experiment, at an expense of $25,000 a year, to 14,000 actual working routes this year, operated at a cost of $8,000,000, and asking for half as much more next year to provide for the extension of the system. 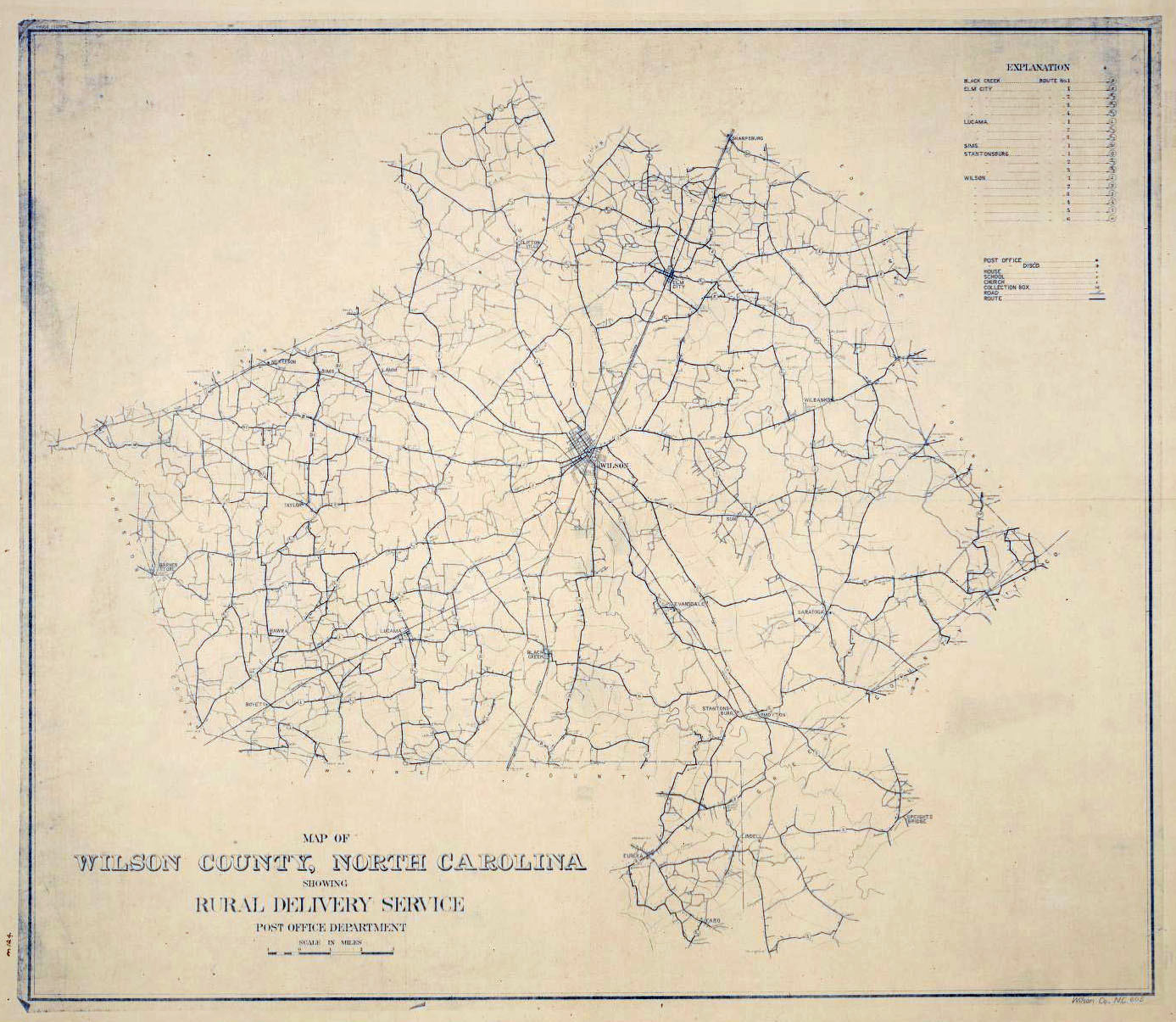 The U.S. Postal Service published maps of its rural free delivery routes like this one of Wilson County, North Carolina, from the 1910s.

I was the more interested in rural free delivery from the fact that the establishment of a route in my home town in New Hampshire had been proposed not long since, and so strongly opposed by some of the citizens that the project had been abandoned. The reasons given for the opposition were generally that small local offices at a distance from the railroads would be discontinued, and the patrons did not believe they would be so satisfactorily served by the new arrangement. I think this feeling arose in the main from the rather common distrust of any innovation, especially when it has to do with an institution so old and respected as the post office. Moreover, the local office is usually located in a country store. The merchant, fearing that the doing away with the office will injure this trade, argues that it ought to be retained, and arrays on his side all those who are attached to him by friendship or by accounts of more or less long standing on the store's ledger.

I was told that all these objections had been made to the establishment of the routes running out from Cassopolis, Mich., the town in which I was staying at the time, and that a day's drive among the people would enable me to judge how they felt about rural free delivery after a little less than a year's trial, the first route from that office having been put in operation October 1st, 1901.

There are four routes in operation from the Cassopolis post office now. I was to go over Route No. 1, the first to be established. The carrier on this route, Mr. G. B. Warner, was formerly a farmer living several miles out of town and in the district which he now serves. He therefore had the advantage of being well acquainted beforehand with many of the patrons of the route and much of the country over which he now drives daily. This route covers twenty-nine miles. This, I was told, was a little longer than the average, twenty-five miles being reckoned a practical working distance.

We left the post office at Cassopolis at 8.30 A. M. and were back there at 5 P. M. There were 109 boxes on the route over which we drove, and we stopped at over one hundred of them. Into those boxes we distributed 264 papers, 37 letters, 8 postals, 12 circulars and 2 packages. The day was Friday, and on account of the fact that so many weekly papers are printed in the middle of the week, the number of papers delivered that day was considerably above the average. When the route was established there were only five daily papers taken in the district which it was to serve. When I rode over it there were sixty-five....

About twenty-five monthly magazines are taken on this route.

The average number of pieces of mail delivered monthly by the carrier with whom I rode at that time was 5,200. Since the route was established the carrier had issued 262 money orders and registered 64 letters. The extension of the money orderA money order was originally a way for people to send money through the mail without sending cash, which could be lost or stolen. (Remember that we’re talking about a time not only before Visa cards but before checking accounts!) The sender buys a money order, which looks much like a check, in the desired amount. The Postal Service then delivers the money order to the recipient, who can exchange the money order for cash. Although you can still purchase money orders in the U.S. today, they’re far less common than they once were.The author says that few of the rural post offices were authorized to issue money orders. Presumably only employees of the U.S. Postal Service were authorized to issue money orders. Rural post offices were usually in a store or other business, and although a postal employee delivered the mail there, no employees of the postal service were available to customers. system is one of the benefits of rural delivery. Few of the small discontinued country offices were authorized to issue money orders. We issued two money orders during the trip I made. One of these happened to be asked for by a man whom I had been told was one of the most violent opponents to the establishment of the route. I asked this man -- a farmer -- how he liked the system.

"Wal," he said, "I'll be honest with you. I fit it jest the best I knew how. I thought we didn't want it. But if I was to sell my farm to-morrow, and go to look for another to buy, I d give five dollars to an acre more for a place where they had rural delivery than I would for one where they hadn't." One other farmer with whom I talked was even more emphatic. He declared that he would never again own a farm at any price outside the limits of rural free delivery.

We made the trip in a small, light, covered wagon, built expressly for this purpose, so as to secure the comfort and convenience of the carrier with the least possible weight.... In the bottom of the front end of the wagon and in easy reach of the driver's seat is a set of pigeon holes in which he arranges his mail as he drives, so as to have it convenient for delivery. This man must have had between fifty and seventy-five pounds of mail when he started out that morning. Delivery begins about two miles out from the post office. The exterior of the cart is painted a light blue, and from its size and color the vehicle is conspicuous a long way off on the country roads. The carrier wears the gray uniform of the regular postal service. Each carrier is required to furnish his own wagon and the horses to draw it, and to provide for the keep of the horses. Two horses are necessary, so that they may have alternate days in which to rest. It takes a pretty good horse to draw such a wagon over twenty-five to thirty miles of country roads in all kinds of weather, at all seasons of the year, making a hundred or more stops, and yet the horse must be docile enough so that he will halt at a word from the driver, when the wagon is alongside a box, and stand there until he gets the word to go on, since both the driver's hands must be occupied in opening the box and depositing the mail in it. For all this and his own services the carrier receives $600 a year.

The Department requires each man living on a route, who wishes the service, to furnish an iron box and set it up on a post of suitable height at some point on the route convenient to the carrier. Those who do not do this must go to town for their mail. Where a man lives off the route as laid out by the Department's agent his box is set up at the nearest convenient point and he comes to it for his mail. With few exceptions the boxes are so near the houses that a signal affixed to the end of each can be seen from the house. When the owner of a box leaves mail in it for the carrier to collect he raises the signal, to attract the carrier's attention; when the carrier has put mail in the box, he leaves the signal raised....

The fact that the Department insisted on certain requirements as to boxes was one of the things which made trouble in the establishing of the route. These requirements in the main are that the boxes must be of iron, and one of some dozen or so kinds approved of by the Department as suitable. These boxes are not made by the Department, but by private firms. The farmer is obliged to buy the box and set it up, at a cost of about $2 to $3. Many farmers insisted that they should be allowed to set up a homemade wooden box. Some claimed that they could not afford to pay for the required iron box. I suspect that the real reason in most cases was because they objected to being as they thought "dictated to." A few men held out for a time after the route was established and did not provide boxes, but eventually they all got into line....

The rural carrier is a daily connecting link between the farmer and the world. By his help the farmers are sure of their mail every day. Without it people who live three miles or more from a post office rarely get their mail oftener than once a week, unless some one goes to town on an errand and brings back the mail for a whole neighborhood. In this case the mail is apt to be left at some central point for chance distribution, which may cause delay or loss....

Along the whole route I improved every opportunity to talk with men and women about rural delivery. I did not find any who did not approve of it, and most were enthusiastic. One man said: "It's one of the things that seems to bring back to us farmers some of the money we've been paying out for years for taxes" indirect taxes in the way of duties, I infer he meant. "Congress votes money, lots of it," he went on, "for armies, and war ships, and river and harbor improvements, and public buildings in cities and towns, and a good many of us live and die and never see none of 'em. But here is something that comes right to our very doors, and we can't help seeing and feeling the good of our money."