The State of Franklin

Even before the Revolution, pioneers crossed the Blue Ridge to settle in what is now Tennessee. By 1770, there were four distinct communities across the mountains, and by the time of the Revolution, the region had enough population to provide a militia, the Overmountain Men, to the Battle of Kings Mountain. North Carolina granted its veterans more of its western lands as payment for their service during the war.

But these settlers were so far from the seat of government — then still in New Bern — that meaningful representation in the state legislature was impossible. In 1785, residents of eight counties in what is now northeastern Tennessee tried to create a separate state, which they called Franklin. Although Franklin was never admitted to the United States, it effectively governed itself for four years. It was governed by John Sevier (1745-1815), one of the first white settlers in the area and one of the leaders of the Overmountain Men.

North Carolina ultimately ceded its western lands to the federal government, and what had been Tennessee County became, officially, the Territory of the United States, South of the River Ohio. In 1796, Tennessee became the sixteenth state.

This petition, signed by several hundred residents of these western lands in 1784, asks the North Carolina General Assembly to allow them to set up a new and separate state. As you read, think back to the Regulators’ complaints. What problems did the residents of Tennessee County face in the 1780s that the residents of the Piedmont had faced in the 1760s?

Petition of the Inhabitants of the Western County.

The Honourable, The General Assembly of North Carolina now sitting --

The Inhabitants of the Western Country Humbly Sheweth:
That it is with sincere concern we lament the unhappy disputes that have long subsisted between us and our Brethren on the Eastern side of the Mountains, respecting the Erecting a new Government. We beg leave to represent to your Honourable body, that from Acts passed in June 1784, ceding to Congress your Western territory, with the reservations and Conditions therein contained. Also from a clause in your Wise and Mild Constitution, setting forth that there might be a State or States, erected in the West whenever your Legislature should give consent for same; and from our local situation, numberless advantages, bountifully given to us by nature to propagate & promote a Government with us. Being influenced by your Acts and Constitution, and at the same time considering that it is our undeniable right to obtain for ourselves and posterity a proportionable and adequate share of the blessings, rights, privileges, and immunities allotted with the rest of mankind, have thought that the erecting a new Government would greatly contribute to our welfare and convenience and that the same could not militate against your interest and future welfare as a Government. Hoping that mutual & reciprocal advantages would attend each party, & that cordiality and unanimity would permanently subsist between us ever after, We earnestly request that an impartial view of our remoteness be taken into consideration. The great inconveniency attending your seat of Government, and also the great difficulty in ruling well & giving protection to so remote a people. To say nothing of the almost impassable mountains, Nature has placed between us, which renders it impracticable for us to furnish ourselves with a bare load of the necessaries of life, except we in the first instance travel from one to two hundred & more miles through some other State ‘ere we can reach your government. Every tax paid you from this county would render us that sum the poorer, as it is impossible from the nature of our situation, that any part could return into circulation, having nothing that could bear the carriage, or encourage purchasers to come so great a distance for which reasons were we to continue under your Government a few years, the people here must pay a greater sum than the whole of the medium now in circulation for the Exigencies and support of your Government which would be a sum impossible for us to procure, would we be willing to give you our all, & of course, must be beholden to other States for any part we could raise; and by these means our property would gradually diminish, and we at last reduced to mere poverty and want by not being able equally, to participate with the benefits and advantages of your Government. We hope that having settled West of the Appalachian Mountains ought not to deprive us of the natural advantages designed by the bountiful Providence for the conveniency & comfort of all those who have Spirit and sagacity enough to seek after them. When we reflect on our past and indefatigable Struggles, both with savages and our other Enemies during our late war, and the great difficulty we had to obtain and withhold this Country from those Enemies at the expense of the lives and fortunes of many of our dearest friends and relations, and the happy conclusion of peace have arrived, North Carolina has derived great advantages from our alertness in taking & securing a Country from which she has been able to draw into her Treasury immense sums of money, and thereby become enabled to pay off, if not wholly, yet a great part, and sink her national debt. We therefore humbly conceive you will liberally think that it will be nothing more than paying a debt in full to us for only to grant what God, Nature & our locality entitles us to receive. Trusting that your magnanimity and justice will not consider it a crime in any people to pray their rights and privileges, we call the world to testify our conduct and exertion in behalf of American Independency, and the same to judge whether we ask more than free people ought to claim, agreeable to Republican principles, the great foundation whereon our American fabric now stands. Impressed with the hope of your great goodness & benevolent disposition that you will utterly abhor and disclaim all ideas of Involving into innumerable, disagreeable and irksome Contentions a people who have so faithfully aided & supported in the time of imminent and perilous Dangers; that you will be graciously pleased to consent to a Separation; that from your paternal tenderness and greatness of mind, you will let your Compensation stipulations & conditions be consistent with honour, equity & Reason, all which will be cheerfully submitted to; and we, your Petitioners, shall always feel an interest in whatsoever may concern your honour and prosperity. Lastly, we hope to be enabled by the concurrence of your State to participate in the fruits of the Revolution; and enjoy the essential benefits of Civil Society under a form of Government which ourselves alone, can only calculate for such a purpose. It will be a subject of regret that so much blood and treasure have been lavished away for no purpose to us, that so many sufferings have been encountered without Compensation, and that so many sacrifices have been made in vain. Many other considerations might be here adduced, but we hope what hath been mentioned will be sufficient for our purpose, adding only that Congress hath from time to time explained their ideas so fully and with so much dignity & Energy that if their Arguments and Requisitions will not Produce conviction, we know of nothing that will have a greater influence, especially when we recollect that the system referred to is the result of the Collected wisdom of the United States and should it not be considered as perfect, must be esteemed as the least Objectionable.

[There were 471 signers of this petition.]

Petition of the inhabitants of the Western Country, December, 1787.

In Senate, December, 1787. Read and referred to Court on Public Bills. 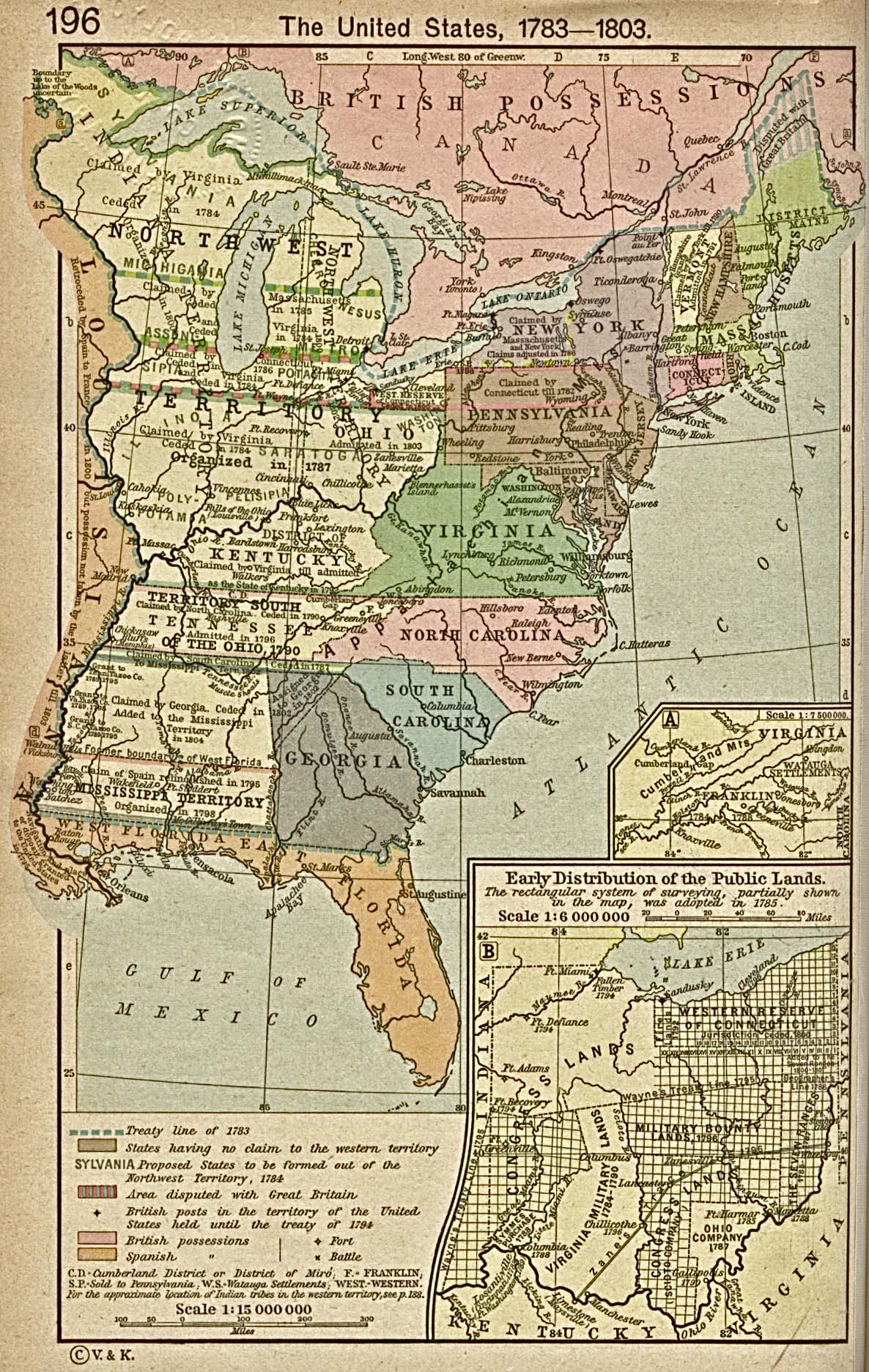 This map shows the United States as it existed between 1783 and 1803, with the State of Franklin in an inset 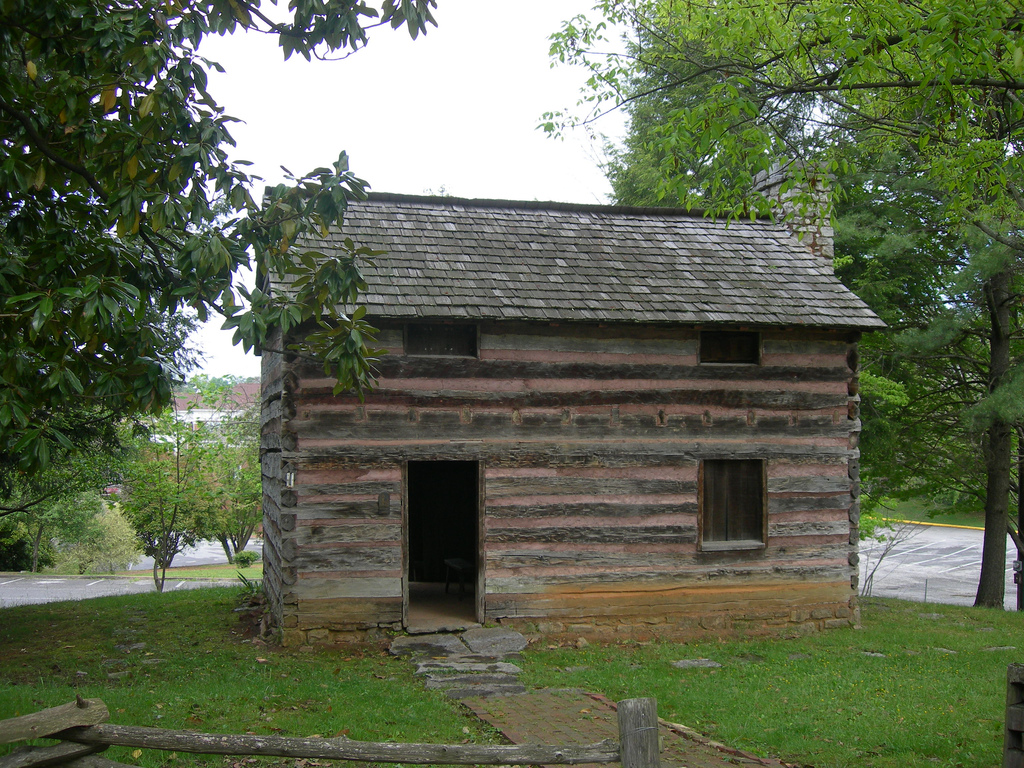 Replica of the capitol building of the State of Franklin