To day again I went to the office, but no letter was there to cheer my spirits, by telling me to come home and dominionhasten to the war. I was anxiously expecting one, and the disapointment went quite hard. The Orange GuardsThe Orange Guards were a company of soldiers from Hillsborough, North Carolina. They formed Company G of the 27th regiment of North Carolina troops. left Hillsboro this morning, and I am told that there were few dry eyes in the crowd congregated to see them depart. There was parting with wives and children fathers and brothers, and with some no doubt a parting for the last time. There was a flag raising here to day. The ladies of the place made and put up the Flag. The citizens raised the pole in which I had the pleasure of assisting. Two young ladies made speaches and were followed by the following noted gentlemen, S. F. Phillipps, Capt AsheSamuel A'Court Ashe was from Wrightsville Beach, North Carolina. He was a student at UNC Chapel Hill before the Civil War., Gov SwainDavid Swain was governor of North Carolina from 1832 to 1835. and Sidney Smith, together with quite a number of Students. Gov Swain in alluding to the war said that the south was invincible by any force that our enemies can send against us. He thought that further blood shed could be avoided, by every man in the South shouldering his musket. Lincoln would then see our strength and would know that it would be useless to attempt to coerce us. Such being the case I beg you to let me be one to proceed to Federal PointFederal point is south of Wilmington. The Wilmington and Weldon Railroad connected the port of Wilmington with railroads to Virginia, and before the war even began, the Confederacy began building a large earthen fort, called Fort Fisher, on Federal point in order to keep supply lines open from Wilmington to troops fighting in the north., and frighten Lincoln out of his witts, if possible and if the Gov's prediction should prove untrue and war should actually be necessary, I should be happy to bear a part, humble though it be, in defense of my country. The flag raised to day contained nine stars, the last two in honor of Virginia and N. C. This is probably the first flag raised, on which N Carolina has been numbered with the seceeding states. God grant that she may soon take her place among her southern sisters in reality. News from Maryland states that, the citizens of Baltimore yesterday attacked the Seventh regiment of N. Y. which was proceeding to Washington in answer to Lincoln's call. reports says that about 14 were killedMaryland was a slave state, but it did not secede. Although Maryland remained part of the Union, many people in the state supported secession. On April 19, 1861, a group of troops from Massachusetts passed through Baltimore on their way to Washington, D.C. A mob with pro-Southern sentiments attacked the troops and the soldiers responded by shooting into the crowd. Four soldiers and 12 civilians were killed..

Thank the lord that Maryland has yet some patriots left within her borders, who will oppose aggression to the death, although she is presided ofer by the traiterous HicksHicks was the Governor of Maryland and although he was a slaveholder, he did not support secession and was instrumental in keeping Maryland part of the Union.. I learn even while writing that Lincoln has taken Genl ScottGeneral Winfield Scott was born in Virginia. He was a well-known public figure in antebellum America. He had fought in the War of 1812 and the Mexican War, and he served as a top military commander for the Union during the Civil War. He did not side with the South, nor was he ever imprisoned. This student may have believed the rumor because Scott was originally from the South. prisoner because he was going to side with the south, and had thrown up his commission, and has him now in Prison. This is fine treatment to give that old veteran who has fought and bled in defence of his country. There was also a skirmish yesterday at Harpers Ferry. Major Lilly of Virginia who lives near there is here now on his way to take charge of his company. Two Thousand South Carolineans are now on their way to NorfolkNorfolk is a seaport town located on the the Chesapeake Bay in the south-east corner of Virginia. to aid the virginians in taking Fort MonroeFort Monroe was a U.S. military base located along the tip of the Virginia Peninsula. When Virginia seceded, U.S. troops were already stationed at this military base. As such, Fort Monroe was occupied by Union soldiers throughout the war.. Can I stay here and pretend to study, when I am continually hearing news from the war and when my country needs? Apr 21st since writing this letter I have heard that fortress monroe is taken, that Gov EllisJohn Ellis was the Governor of North Carolina from 1858 until his death in 1861. He was a slaveholder and believed that the constitution safeguarded private property, and he believed slaves were the property of their owners. As such, he strongly supported North Carolina's secession from the United States. has caled out thirty thousand troops. There is a company formin[g] here to go to Washington City, composed of students. As my state needs my services I shall not volunteer. Please write to Capt Cowan immediately and see if he will except me. I am copelled to go somewhere. Another of my classmates Lyon of Edgecombe leaves tomorrow morning. Several will leave during the week. 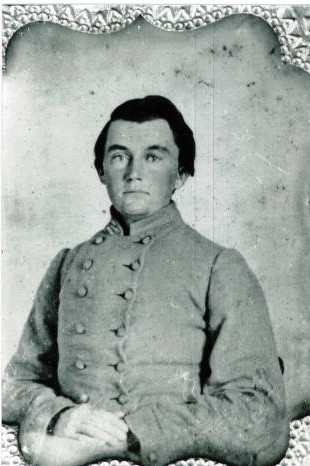 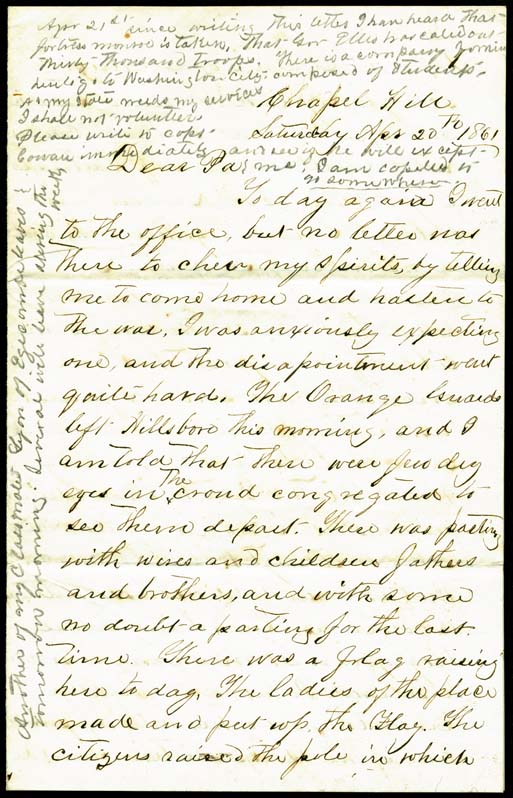