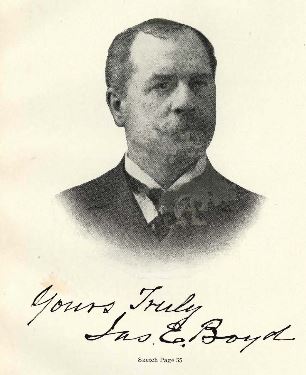 James Edmund Boyd, lawyer and judge, was born in that part of Orange County which is now Alamance County, the son of Archibald Hill and Mary Weatherly Boyd.

He attended Graham Academy and studied at Davidson College for two years (1862–64). At the age of sixteen, he enrolled in the Thirteenth North Carolina Infantry; later he joined the First North Carolina Cavalry and fought with Lee and Jackson in Virginia. He was a courier at Appomattox and carried a message from General Lee to General Grant requesting a meeting to arrange for the surrender.

The years of 1866 and 1867 were spent reading law under Judge Thomas L. Ruffin, and Boyd was admitted to the North Carolina bar in 1868. He began the practice of law in Graham and was elected a member of the General Assembly (1874–75). He was also a delegate to the convention of 1875. After removing his residence to Greensboro, he served as the U.S. attorney for the Western District of North Carolina from 1880 to 1885 under appointment of President Hayes. He was also elected mayor of Greensboro in 1894. The office of second assistant attorney general of the United States was given to him in 1897 by President McKinley. He was appointed judge of the federal district courts in the Western District of North Carolina in 1901 and served for twenty-three years with distinction. He was also a delegate to the 1904 Universal Congress of Lawyers and Jurists.

Boyd married Sallie Holt, member of a prominent and well-known family of Alamance County, on 12 Sept. 1868. One son, Thomas, died soon after he finished his law course. Sallie Boyd died in 1928, and Boyd died in Greensboro at the age of ninety.

I believe this entry should

I believe this entry should be updated. James E. Boyd was a member of the Reconstruction Era Ku Klux Klan, and he testified regarding his activities during the impeachment trial of William Holden. He specifically testified to what he heard about the murders of Wyatt Outlaw and John Stephens. This entry makes no mention of that at all, skipping most of Reconstruction. Including details about his Reconstruction experience seems quite relevant to a biography of Boyd as well as the state's history.. You can find Boyd's testimony online here: https://cwnc.omeka.chass.ncsu.edu/files/original/9ec9f6390b8fa2cbe9708c7...