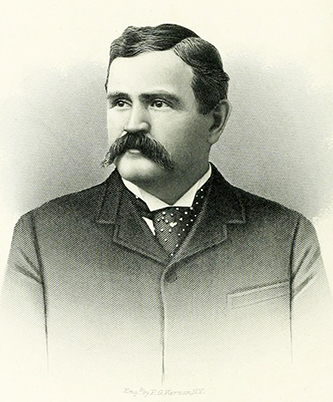 Bennehan Cameron, planter, railway executive, industrialist, and promoter of good roads, was born at Fairntosh in what was then Orange County, the son of Paul Carrington and Anne Ruffin Cameron. At the death of his father in 1891, he received what was the heart of the Cameron land, the Stagville and Fairntosh plantations of 6,200 acres lying between the Little and Flat rivers. He also received the home his grandfather, Duncan Cameron, had built on Hillsborough Street in Raleigh; the four lots ("Bennehan Square") in Raleigh that his great-grandfather, Richard Bennehan, had bought when the city was first laid off in the last decade of the eighteenth century; and other holdings of land, stock, and personal property.

In him the pattern of life characteristic of his father, grandfather, and great-grandfather repeated itself once more, now for the last time in a male Cameron in direct line of succession. After preparatory school work under Samuel W. Hughes at Cedar Grove in Orange County and at Horner and Graves' Academy at Oxford, he attended Eastman's Business College at Poughkeepsie, N.Y., and then entered Virginia Military Institute. From there he was graduated with distinction in both scholarship and military proficiency in 1875. In later life he always took a great interest in military activities and was a keen student of military history. He studied law under his uncle, William Kirkland Ruffin, and was admitted to the bar in 1877. He practiced law for only a short time, however: like his father, he found that most of his time was needed for the management of his plantations and his other duties.

In him likewise appeared the same high respect for agriculture and interest in improving it that were conspicuous in his father. He was especially proud of his fine horses and his highly bred herd of Jersey cattle. He presented the famous stallion Choctaw to General Fitzhugh Lee, who rode him in Cuba throughout the Spanish-American War. Cameron was at various times a director and president of the state agricultural society, president of the National Farmers' Congress of America, a member of the Royal Agricultural Society of England, and president of the North Carolina State Fair Association.

At the same time, Cameron was greatly interested in finance and industry. He was a director of the Morehead Banking Company, and he helped to organize the First National Bank of Durham. He was director and president of the Rocky Mount Cotton Mills. Railroad building and consolidation were matters to which he also gave much attention. He was on the committee that built the Caraleigh Railway Branch and the Union Depot in Raleigh, and he was instrumental in helping to build and strengthen the Oxford and Clarksville Railroad, the Lynchburg and Durham Railroad, and the Durham and Northern Railroad. He was the leading figure in the building of the Oxford and Coast Line Railroad. A director of the North Carolina Railroad for more than thirty-five years, he had a large part in leasing it to the Southern Railroad. His greatest work in connection with railroads, however, was the bringing together of many small lines into the Seaboard Air Line system.

Far ahead of his day, Cameron vigorously supported all movements to build good roads, especially the great interstate highways. He was chairman of a committee that introduced a bill in the state legislature to issue fifty million dollars in bonds for the improvement of North Carolina roads. He was head of the Bankhead Highway Association, a movement to connect the southern states by excellent highways, and he was actively associated with the movement to build the Quebec to Miami Highway.

A friend to education like his ancestors, he was active in all movements to develop and strengthen The University of North Carolina, even though he had not attended it, and he was a trustee of the institution for over thirty-four years. In politics he was a Democrat. His counsel was sought by many political and military leaders of the state, and he served in various capacities on the staffs of Governors Vance, Jarvis, Scales, Fowle, Holt, and Carr.

Cameron was treasurer of the North Carolina Society of the Cincinnati and through it was instrumental in having monuments commemorating General Francis Nash and General William Davidson erected on the battlefield of Guilford Courthouse. He was on the Stone Mountain Memorial Committee, which had huge figures of Confederate leaders carved on a granite monolith near Atlanta, and he once entertained Gutzon Borglum, one of the sculptors, in his home. A story that appeared in some of the newspapers, that parts of D. W. Griffith's famous film The Birth of a Nation were filmed at Fairntosh and the Duncan Cameron home in Raleigh, is untrue; but Cameron was a close friend of Thomas Dixon, who wrote The Clansman, the novel upon which the moving picture was based, and the principal family in the novel is given the name Cameron.

Cameron's devotion to his family traditions was constant. Even during the years when his children were growing up and he lived mainly in his Raleigh home, he spent several days out of every week on his plantations and maintained his legal residence at Stagville. Motivated by justifiable pride, he had a bronze tablet commemorating the Reverend John Cameron, his great-grandfather, placed in the Old Blandford Church at Petersburg, Va., on 25 Sept. 1908. He, his two little daughters, and his cousin, Governor William E. Cameron of Virginia, were present at the unveiling on 11 Oct.

Cameron had a vigorous constitution and enjoyed excellent health. Particular sources of delight for him were country sports, horses and horsemanship. He cherished the traditions handed down in the family concerning Sir Archie, the most famous race horse of the first quarter of the nineteenth century, which had belonged to an Amis relative of his great-grandmother Bennehan in Northampton County.

On the night of 27 Aug. 1891, Cameron became the hero of a train wreck near Statesville; he was almost the only one out of a hundred passengers not killed or seriously injured, and he saved many of his fellow passengers from death.

On 28 Oct. 1891, Cameron married Sallie Taliaferro Mayo, daughter of Peter H. Mayo of Richmond, Va., who had been on Robert E. Lee's staff. By this marriage there were four children: a son, Paul Carrington, who died in childhood; a daughter, Anne Ruffin, who died in infancy; and two other daughters who survived to maturity. Cameron died at Raleigh and was buried near his father at St. Matthews Episcopal Churchyard, Hillsborough. His two surviving daughters, Isabella Mayo (Mrs. Eric Norman van Lennep of Bridgewater, Conn.) and Sally Taliaferro (Mrs. John Witherspoon Labouisse) inherited respectively, with other property, the Stagville and Fairntosh plantations.

Samuel A. Ashe, ed., Biographical History of North Carolina, vol. 3 (1905 [portrait]) and Cyclopedia of Eminent and Representative Men of the Carolinas of the Nineteenth Century, vol. 2 (1892 [portrait]).

Manly Wade Wellman, The Life and Times of Sir Archie (1958).

Why is there no mention about

Why is there no mention about what prolific slave owners the Bennehans were?

Thank you for visiting

Thank you for visiting NCpedia and for sharing this question. I am fowarding your question to NCpedia editors and content developers who will be able to look into this question for you and to investigate omissions in the historical content.