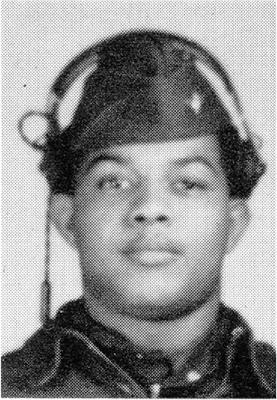 Officially known as the Ninety-Ninth Pursuit Squadron of the United States Army Air Corps, the Tuskegee Airmen was the first African American air force unit in the nation. The Airmen served during World War II. According to group records, 992 men completed flight training at the segregated Tuskegee Army Air Field at Tuskegee Institute in Alabama, where the squadron was based. Of that number, 445 served as combat pilots. In 1944 the Tuskegee Airmen joined three other all-black fighter squadrons to form the 332nd Fighter Group. Sixty-six aviators were killed in combat and training, and thirty-nine men were shot down and became prisoners of war. During the war, the group completed more than fifteen thousand sorties (missions), destroyed more than 250 enemy aircraft, sank one enemy destroyer, and demolished numerous enemy installations in Europe. Notably, none of the bomber aircraft escorted by the Airmen was lost to enemy planes. The Tuskegee program expanded to train pilots and crew to fly bombers toward the end of World War II, but the conflict ended before they could be deployed. Ultimately, the achievements of the Tuskegee Airmen helped to lead to the integration of the military in 1948.

First Lieutenant Wilson Vash Eagleson served as a Tuskegee Airman. He is one of twenty original Airmen who call North Carolina home. There are approximately forty-­five Tuskegee Airmen chapters across the United States, and the one based at Seymour Johnson Air Force Base in Goldsboro is named after Mr. Eagleson.  He consented to a September 12, 2003 interview with the Tar Heel Junior Historian, upon which this article is based.

Born on February 1, 1920, Wilson Vash Eagleson II grew up in Bloomington, Indiana. As a child, he suffered with rheumatic fever and needed a moderate climate, so he and his sister had to live with his grandmother in Bloomington after his parents were offered jobs at North Carolina Central College (now University). His father was the first football, basketball, and baseball coach at the Durham college. His mother was a registrar at the same institution for about forty-eight years. “I grew up Bloomington, Indiana, and I lived there until my father was killed in a car wreck when I was thirteen years old. But the year before that, he took me to the fair, and I got to ride in an aircraft—one of the old two­seater barnstormers. And from then on, the only thing that I really wanted to do was fly.” Eagleson moved to Durham in 1934, after his father’s death. He said that the mascot for the college was named after his father. Eagleson notes, “They’re called the Eagles. And there’s a dormitory on the campus that’s been named for my mother. So I grew up basically in a college atmosphere as a youngster. And we were on one side of town, and we basically stayed there.”

After he graduated from high school in Henderson, he went to West Virginia State College, where he became a member of the Civilian Pilot Training program in 1938. “Of course, the first thing that I did was volunteer for the air force. And we were of course told then that [they’re] not taking colored, as we were called then, into the air force. So I continued in school, coming back to Indiana University and spending a year there. And I went into service on January 19, 1942. But I went into the infantry. And I spent two tours at a little base called Fort Walters, Texas: one as a trainee, and one as a cadre, training the new bunch of men behind me. From there I went to Fort Benning, Georgia, to Officer Training School.” One day the commander there told Eagleson to pack his bags, as he was going to Tuskegee to learn to fly. He had applied for the flight program at Tuskegee Army Air Field, and he had been accepted in September 1942.  Eagleson graduated from the training at Tuskegee and was commissioned on April 29, 1943.  He got married on May 1, 1943, and left for war in September 1943. He was overseas for eighteen months, returning home in March 1945.

He commented on his wartime service. “Someone asked me once what it was like to fly in combat. I said, ‘Well, it could be seven or eight hours of complete boredom and thirty to forty seconds of sheer bedlam.’” Eagleson went overseas with the Ninety-Ninth Pursuit Squadron. “We were a single outfit attached to some of the other groups, and most of our work then was dive bombing and strafing missions. We were flying out of Naples, Italy; we covered the Battle of Anzio, and that’s when we began... to show what we could do.” He shot down two enemy aircraft and got two probables over Anzio.

In 1943 the Airmen were flying old P-40s, and on July 4, 1944, they got their first P-51 and “that was the start of the Red-Tail Angels.” The group was supposed to have a red stripe across the tails of its aircraft. “And of course if you look at aircraft today in the military, they all have something to identify them with.” A member of the group did not think that the red stripe was big enough, so the entire tail was painted red. “And believe it or not, the other three groups in the wing that we were in copied us. We had one group called the Checkerboards; they painted their whole tail checkerboard. Another was the Candy Stripes, and they painted their whole tail with candy stripes. And I believe that the fourth one was a solid yellow. But we all . . . had tails that you could see from any distance. So in July of 1944, we got our first P-51. And you know, that was a gorgeous thing. That was the first plane that we’d ever had in the outfit that wasn’t painted with the camouflage colors. This was solid silver.”

Returning to a previous thought, Eagleson said, “Basically this was... where that seven or eight hours of boredom came from. Anywhere up to the minute of bedlam. Because the dog fights [that] you see on TV don’t last long like that. It’s a quick thing. You either miss them or they get you, or you get them or they miss you. But at four or five hundred miles an hour, you don’t have time to turn around [to] look and go back and shoot at someone again because you’re too far apart. So basically [there’s] one pass at the most.”

Eagleson’s group served in Africa, Sicily, and Italy. “I joined when we were still stationed in Sicily, but most of our flying was done out of Italy, because we flew the southern portion of Italy. We did have one long-range mission to Berlin one day, but basically it was escorting the B-17s and B-24s out of Italy, and there were still some in Sicily. We were escorting them . . . all the way across . . . Romania.”
Eagleson received numerous awards and honors for his service. He has a Distinguished Flying Cross, an air medal, a Korean campaign medal, and a Vietnam campaign medal, among others. He believes that he has eighteen medals and ribbons altogether, and they make a “nice fruit salad badge on your uniform.”

After returning home in March 1945, he helped to close down the Tuskegee Army Air Field and went to inactive duty after being RIFed (reduction in force) following the war. “But I spent so much time in and around the airport and aircraft, my wife said one day, ‘Why don’t you go back and serve, since you love the air place that much?’ So I went down one day and enlisted in the Army Air Force then. So I spent a total of thirty years in service.”

When asked how he was treated by service people outside of his race during his military career, Eagleson replied, “Not any different from before the war. When we came back from overseas, for instance, there were German prisoners of war [who] had complete run of the base. They could go to the movies and anyplace that they wanted to, but we were still segregated. We came back from overseas, and we went through the Colored entrance and got on buses and trains and went home. The others went down Broadway and had a ticker-tape parade. We were never actually welcomed home. In fact, it wasn’t until 1948 that they desegregated the military forces. There was not much recognition for what we had done. In fact, I guess in the last five to six years [has it been] recognized that we were a part of the winning team in World War II.”

Eagleson comments on the state of race relations today. “It’s been a great change, especially around air bases. I think that the people close to the air bases recognize the contributions that the armed forces have provided, and they are much, much more tolerant than they used to be. You still have some areas of prejudice, some areas of segregation... But basically, it’s a great, great improvement.”

He was a member of the Wilson Eagleson Chapter of the Tuskegee Airmen at Seymour Johnson Air Force Base and did lectures at schools, churches, civic organizations, air shows, and other places. Eagleson tells the story of what the Airmen did, “what happened to us, basically [to] keep the history alive.” Mr. Eagleson died on April 16, 2006.

At the time of this article’s publication, Doris McLean Bates worked as a historical publications editor at the North Carolina Museum of History.

Wilson was a great man and an

Wilson was a great man and an even better friend. He is missed.

I am presently reading

I am presently reading through the WWII letters from my grandfather, Donald A. Rogers of Bloomington, Indiana. . I read the passage quoted below and looked up Wilson Eagleson. I thought this might be of interest.
The letter is one of 1000s that he wrote during his years in the war.
This letter was written to his wife, my grandmother, Marie Woolery Rogers also of Bloomington IN. I believe Donald was in Naples Italy at the time of this writing.
Italy
Wed. morning
3 Jan 1945
“I didn’t write last nite as usual. Did I tell you that day before yesterday as I was coming out here to the billet (I’m writing before breakfast now) I picked up an American soldier. He was a colored Lt. As usual I asked him where he was from i.e. what state. He said - Indiana- I said well fine, how are you fellow Hoosier or something - then asked what town. He said Bloomington. Well it turns out to be Wilson Eagleson, son of Vashon who was a little older than we. Last nite I took some Bloomington newspapers up to him. He’s in an aviation unit and is here at their rest camp which is just a little piece from here. As as there was a U. S. O. show, I invited him and the that’s where I was last night.”