John Washington Graham, Confederate major, attorney, and politician, was born in Hillsborough, the second son of William A. and Susannah Washington Graham. The grandparents, the Joseph Grahams of Lincoln County and the John Washingtons of New Bern and Kinston, were well connected and influential in their respective sections of North Carolina. The father, William Alexander Graham (1804–75), was destined to become one of the state's most trusted political leaders. John Washington Graham attended the Caldwell Institute (where Alexander Wilson was principal), Abbott's Classical Academy in Georgetown, D.C., and The University of North Carolina. Especially capable in Latin and mathematics, he read law with William Horn Battle and Samuel Field Phillips and eventually received A.B. (1857), M.A. (Special Alumni, 1859), LL.B. (1860), and LL.D. (Honorary, 1921) degrees. He served his alma mater as tutor from 1858 to 1860 and as an active trustee from 1876 to 1928.

Graham began his legal practice in 1860, only to have this undertaking interrupted by the Civil War. He entered Confederate service in April 1861 and performed the duties of a junior staff officer until March 1862, when he returned to Orange County. There he raised Company D, Fifty-sixth North Carolina Regiment, leading his company as captain until he became regimental major in September 1863. He was seriously wounded in late March 1865, some two weeks before General Robert E. Lee's surrender at Appomattox. Shot through both legs, he eventually recovered fully. His action against Federal artillery at the Battle of Plymouth (April 1864) was especially meritorious. Noted as an officer genuinely concerned for his men, Graham was characterized as "one of the hardest fighting soldiers in the Southern army." 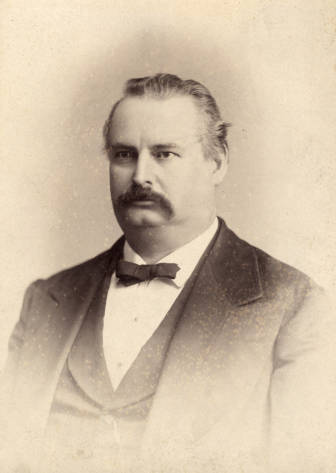 After the war, Graham was influential among those who "redeemed" the state from Republicanism. He became a leading Conservative, joined his illustrious father in denouncing Radical Reconstruction and black suffrage, and became a staunch opponent of Governor William W. Holden. From 1865 to 1868 he was Orange County solicitor, in a time when critical decisions regarding social and legal prerogatives were commonplace. As a delegate to the Constitutional Convention of 1868, he joined Thomas J. Jarvis, Plato Durham, and a few others in vainly stating the Conservative position to an overwhelming, hostile majority. Graham served in the state senate from 1868 to 1872 and voted for Holden's impeachment, while glorying in the denunciation of the Republican party and its programs. An unsuccessful candidate for state treasurer in 1872, he supported the call for the Constitutional Convention of 1875 and the changes made therein. Subsequently his public service included terms in the state senates of 1876, 1907–8, and 1911. In the latter two legislatures he was chairman of the railroads and judiciary committees, respectively. Also, he was trustee of the sinking fund of the North Carolina Railroad Company (1877–89) and chairman of the North Carolina Tax Commission (1886–87)—a three-man panel whose report provided the basis for the state's tax policies for several years. In financial matters he was cautious and always mindful of North Carolina's fiscal integrity and best interests. He was an unsuccessful candidate for Congress in 1886, receiving the Democratic party's nomination in his district after 153 ballots.

An eminently successful attorney and constitutional authority, he practiced his profession until his eighty-fourth year. He had a succession of partners including his father, his brother, James, and Thomas Ruffin, Jr. His practice was centered in Orange, Durham, Person, Alamance, and Caswell counties. He was an effective orator and frequently swayed juries by biblical quotations or humorous anecdotes, or both.

Graham was married twice. On 9 Oct. 1867, he married Rebecca Bennehan Cameron Anderson (1840–83), a daughter of the Paul C. Camerons and the widow of Lieutenant Robert Walker Anderson, Graham's friend and comrade-in-arms, who was killed in the Wilderness in May 1864. Their five children who lived to adulthood were Paul Cameron, Isabella Davidson, William Alexander, Joseph, and Annie Cameron Graham. In December 1887 he married Mrs. Margaret Forrester Bailey of Tallahassee, Fla. This union produced one son, Alexander Hawkins Graham (1890–1977), himself a distinguished attorney and public servant.

When John W. Graham died in his ninetieth year, he was widely lamented. An overflow crowd, including Governor Angus W. McLean and other dignitaries, attended his funeral services in St. Matthew's Episcopal Church, Hillsborough, where for fifty years he had been vestryman or warden. Called by his rector a "Christian gentleman" in the "fullest sense," Graham was buried in the peaceful parish churchyard.

John W. Graham, Some Events in My Life, An Address to the North Carolina Bar Association (1918).

John Washington Graham. Image courtesy of The Carolina Story: A Virtual Museum of University History. Available from http://dc.lib.unc.edu/cdm/singleitem/collection/vir_museum/id/833 (accessed May 21, 2013).

This bio is full of gross

This bio is full of gross undertandment about Graham’s leadership in white supremacy movement. “Redeemers “ like Graham were barely above the Klan and as important in destroying any meaningful reconstruction in N.C. Please brand Graham for what he was.