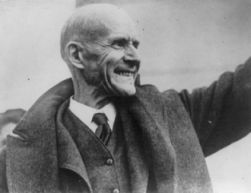 The Socialist Party of North Carolina (SPNC), formed in 1996, is the modern affiliate of the national Socialist Party, which was organized in July 1901 by the merger of the Social Democratic Party, under Eugene V. Debs, with the reformer wing of the Socialist Labor Party, under Morris Hillquit. The SPNC has small, organized groups in Raleigh and Jacksonville. In the 2000 presidential election, for the first time since 1936, a Socialist Party member was an official write-in candidate in North Carolina. In the early 2000s the SPNC was involved in a variety of causes, including a boycott of Mt. Olive Pickles and People of Faith against the Death Penalty. Again as a write-in, the national Socialist Party presidential candidate in 2004, Walter Brown, received about 300 votes in North Carolina.

Looking at the comments above

Looking at the comments above, and the dates, it appears this group is defunct?

Does anyone know where their

Does anyone know where their buncombe county precinct is?

I'm new the Socialist Party and would like to get involved with people of like mind, protest and civil-disobedience.

Jan, if you haven't gotten in

Jan, if you haven't gotten in contact with the Socialist Party USA in North Carolina yet, you can contact me (Stephanie) at: cholensky.s@gmail.com. I am currently the Secretary of the Northern Piedmont Local of the SP-USA, and I would love to hear from you! If you agree with our statement of principles, you can join the party here: https://www.socialistpartyusa.net/join-the-party

How do I join? What

How do I join? What candidate does the NCSP support?

Thanks for visiting NCpedia and posting your question.

Your question was posted on an entry about the NC Socialist Part in the NCpedia, the encyclopedia of North Carolina. For more information about the NCSP, you may wish to visit their website:  http://ncsocialistparty.weebly.com/.

I hope this helps and best wishes,

I would like information on any meetings or activities in Charlotte area. Thank you!

Thank you for your inquiry,

Thank you for your inquiry, if you would like more information on the current Socialist Party USA in North Carolina, you can contact (Stephanie) at cholensky.s@gmail.com I am currently the secretary of the Northern Piedmont Local of the SP-USA. If you agree with our Statement of Principles, you can join the party here: https://www.socialistpartyusa.net/join-the-party