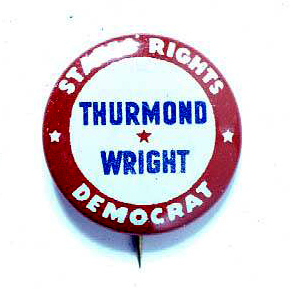 Dixiecrats, officially members of the States' Rights Democratic Party, formed after the 1947 publication of President Harry S Truman's Committee on Civil Rights report, To Secure These Rights. This report, reflecting one of the most aggressively pro-civil rights positions taken by the federal government since Reconstruction, mobilized conservative southern Democrats to block civil rights legislation and contest Truman's nomination for a second term. When the Democratic National Convention of 1948 voted for a stronger civil rights platform than even Truman supported, disgruntled southerners bolted. They reconvened in Birmingham, Ala., under the name States' Rights Democratic Party and nominated South Carolina governor J. Strom Thurmond for president and Mississippi governor Fielding Wright for vice president. Citing southern tradition, the Dixiecrats combined a belief in decentralized government with a passionate defense of their racially hierarchical, segregated society.

The Dixiecrats gained a following of varying sizes in each of the former Confederate states, carrying South Carolina, Mississippi, Alabama, and Louisiana in the presidential election. In North Carolina, however, the Dixiecrat campaign failed to generate much enthusiasm for two reasons. First, the powerful Raleigh News and Observer doggedly and vociferously opposed the Dixiecrats, describing their leaders on one occasion as possessing "an arrogance that has been rivaled only by their stupidity." Throughout the summer of 1948 the newspaper informed its readers at every opportunity that North Carolinians were not interested in abandoning the national Democratic Party and joining the "rebels."

Judging from the apparent lack of participation by North Carolinians in the Dixiecrat conventions in Birmingham and Houston, it seems that the News and Observer was largely correct. At the Birmingham convention, reference to North Carolina came in the form of a Texas state senator castigating the liberal "pinks" in Chapel Hill. A second explanation for the failure of the Dixiecrats in North Carolina was dissension within the state party ranks. Lacking a full roster of candidates for state offices, North Carolina Dixiecrats awkwardly supported regular party Democrats for local election while still opposing Truman at the national level.

Whether arguing for or against the Dixiecrats, North Carolinians revealed the intimate connection white southerners made between issues of governance and race in the midtwentieth century. The Asheville Citizen criticized the Dixiecrats' third-party efforts as futile, yet at the same time it pronounced the national Democratic Party's support of civil rights the result of "the whipsawing of extremists" in the North. Although the Citizen recommended avoiding the "hot-headed leaders" of the Dixiecrats, it chided national Democrats for forcing on the South a civil rights position that many whites found repugnant. Ultimately, while many white North Carolinians shared similar concerns over the increasing centralization of power in Washington, D.C., and the growing threats to racial segregation, the institutional strength of the national Democratic Party carried the day and the state. North Carolinians were also swayed by Democratic support of various farm programs and by Truman's leadership in defeating the Axis powers in World War II. Thurmond and the Dixiecrats garnered approximately 54,000 ballots, or 8 percent of the vote, in North Carolina. With Truman's stunning election over Thomas Dewey, the Dixiecrat Party dissolved.