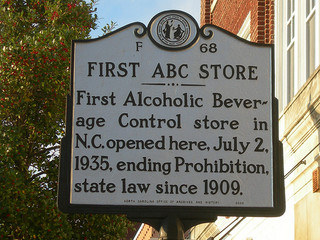 The Alcoholic Beverage Control Commission was created by the General Assembly in 1937 to regulate the sale of alcoholic beverages in North Carolina after the repeal of the Eighteenth Amendment (Prohibition). The modern commission consists of a chair and two associate members appointed by the governor. Its duties include supervising local ABC stores for the sale of spirituous liquors, determining what brands of alcoholic beverages may be sold, maintaining the state ABC warehouse for the distribution of spirituous liquors, regulating the sale of wine and beer, and issuing permits for wineries, breweries, wholesalers, and retailers. The ABC Commission also sets standards and adopts rules for malt beverages, unfortified wine, fortified wine, and spirituous liquors to protect the public against beverages containing harmful or impure substances.

How much jail time does

How much jail time does somebody get for first offense for making moonshine. And is it base on the gallons they able to produce. And is wine and beer illegal to make at home

Thank you for visiting NCpedia and taking time to share your question. That's a very interesting question!

You may want to visit the website for the NC Alcoholic Beverage Control Commission at: http://abc.nc.gov/.  You will find information and permitting and legal issues relating to alcoholic beverage sale in North Carolina.  You will also find contact information on the site if you have additional questions.