Aviation is of significant importance in providing transportation services for people and air freight. It is also a real and perceived economic engine in the communities where services are located. For example, a recent (2005) study by UNC-Charlotte’s Center for Transportation Policy Studies for Charlotte Douglas International Airport revealed that the impact of that airport on the region was on the order of $10 billion per year. Like most states, North Carolina’s airports are categorized into three tiers. First tier airports are those with service to multiple connecting hubs and origin-destination markets. These airports serve the state’s three largest metropolitan areas – Raleigh-Durham, Charlotte, and Greensboro/High Point/Winston-Salem.

North Carolina’s second tier of commercial airports includes airports with service by multiple carriers, and it includes Asheville, Wilmington, and Fayetteville. The third tier of airports that have a combination of commuter air service and general aviation are located in New Bern, Greenville, Jacksonville, Kinston, Rocky Mount/Wilson, Hickory, Southern Pines, and Manteo. These are airports with service primarily connecting with the three Tier One airports in the state and limited service to other cities. A current trend is for the so-called “low cost” airlines to initiate service in airports in all three tiers. Figure 23 shows the approximate locations of the primary airports in North Carolina. In addition to these commercial airports, there are approximately 60 public airfields that serve general aviation, and over 300 privately-owned, private-use airports. These smaller airports provide important travel mode options to many residents and visitors to the state. 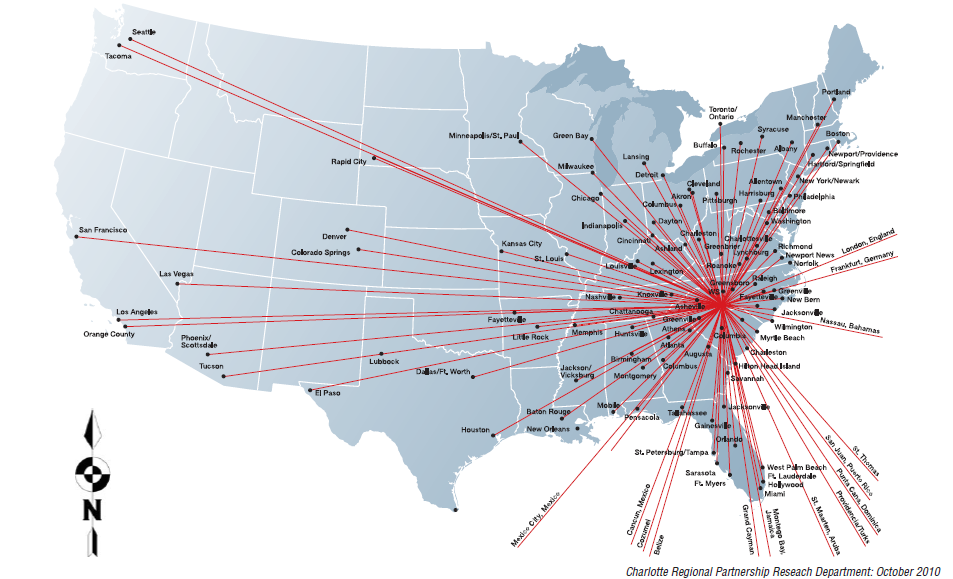 Much of the success of regional industrial and business expansion initiatives over the past two decades in the Charlotte region has been attributable to the transportation system in the region, and in particular the range of services and amenities found at the region’s major air transportation facility. Over 640 daily departures from Charlotte Douglas provide service to 134 cities nationwide and in several offshore markets. In particular, the direct flights to Munich and Frankfurt, Germany, and London, England, offer substantial promise for connectivity that will likely encourage European Union investments in the region in the future.

Cargo carriers serving Charlotte carry over 195,000 tons of domestic and international cargo annually. Twenty cargo carriers and more than 70 freight forwarders service the airport. It is the 57th largest cargo airport in the United States. Other features are direct connections landside to Interstate routes I-77, I-85, and the I-485 circumferential loop around Charlotte.

Another fact that illustrates the “state” of air travel in North Carolina is that the state also has one of the largest proportions of restricted airspace in the country with the inclusion of several military aviation sites: Camp Lejeune, Fort Bragg, Seymour Johnson Air Force Base, Pope Air Force Base, Cherry Point, and Elizabeth City’s Coast Guard Station. The fact that North Carolina’s Outer Banks is arguably the “birthplace of aviation” (the site of the historic Wright Brothers inaugural flight at Kitty Hawk in 1903) further testifies to the history and importance of air travel in the state.

In the spring of 2011, North Carolina was served by two Class I railroads and 20 shortline railroads. The two Class I railroads maintained 2,650 miles of track and the short lines operate on 930 miles in the state. The two long-haul carriers are Norfolk Southern and CSX. Norfolk Southern, through its Norfolk Southern Railway Company subsidiary, operates approximately 20,000 route miles in 22 states, the District of Columbia, and Ontario, Canada, serving every major container port in the eastern United States and providing connections to western rail carriers. Norfolk Southern operates an extensive intermodal network and is the nation’s largest rail carrier of automotive parts and finished vehicles.

Superimposed on part of the trackage on which the Norfolk Southern operates its trains, the North Carolina Railroad Company (NCRR) owns 317 miles of tracks stretching from Charlotte through Salisbury, Greensboro, Durham, and Raleigh, then southeast to its terminus in Morehead City. The NCRR is a Real Estate Investment Trust whose voting stock is controlled by the State of North Carolina. NCRR owns and manages the rail line and other properties adjacent to the line. Not only do freight trains operated by Norfolk Southern carry products on the NCRR, but Amtrak runs two passenger trains, the Piedmont and the Carolinian, along its corridor. Plans for regional mass transit operations along NCRR’s rails are also possible in the future in the Charlotte region, the Piedmont Triad, and the Research Triangle. For example, NCRR completed a study on the potential for commuter rail on its line between Greensboro and Goldsboro.

Figure 25 illustrates graphically the total rail freight flows into and out of North Carolina. The highest volume of freight traffic is on the CSX line connecting Charlotte to the Port of Wilmington, the Norfolk Southern/NCRR line from Charlotte through Greensboro to Raleigh, and the CSX line that runs north-south roughly parallel to Interstate Highway 95. Those three corridors handle approximately 40 million tons of freight annually. Table 10 shows the total volume of rail shipments statewide in 2008, compared with other states on the Atlantic coast.

In spite of a relatively robust condition of the overall rail freight system in the state, there continue to be issues with the loss of rail access to individual businesses from time to time. Over the past three decades, over 700 miles of track have been abandoned. Some of these miles have been adapted to “Rails to Trails” use, but some have created shifts in freight mode and forced industry to ship products by truck where lines were abandoned.

As mentioned in the description of the North Carolina Railroad, there is significant intercity passenger rail transportation available in North Carolina. In 2009, state intercity train services operated by Amtrak carried more than 346,000 passengers on two state-subsidized operations, the Carolinian (service between Charlotte, Raleigh, Rocky Mount, and on to New York City) and the Piedmont (service connecting Raleigh, Cary, Durham, Burlington, Greensboro, and Charlotte). Amtrak in addition operates four long-distance trains with stops in the state. Figure 26 illustrates current passenger rail routes as well as the long-range development plan for passenger rail in North Carolina, including commuter rail lines in the Charlotte, Triad, and Triangle regions, plus the possibility of high speed rail.

what is my old carolina

what is my old carolina central railroad bond worth today?

Thanks for visiting NCpedia and taking a minute to share your artifact and question.

Unfortuantely, NCpedia has no information to help readers appraise bonds or other historic artifacts.  Here are some suggestions for places to start your research:

You may also be interested in this NCpedia entry on the Central  Carolina Railway -- http://ncpedia.org/carolina-central-railway.

I am working on a passenger

I am working on a passenger rail system in Tennessee. There is an opportunity to link Asheville, NC with Knoxville, TN.