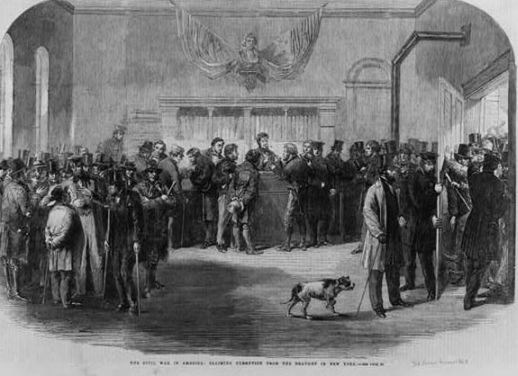 I have a record of a Union

I have a record of a Union Captain in the "Com. Subs. Volunteers". Can you tell me what the abbreviations stand for? Many thanks!

I suggest searching for a service record, such as on ghe site fold3.com. Aslo, here is an article fromthe National Archives, were those records are kept https://www.archives.gov/publications/prologue/1994/winter/civil-war-dra...

Do you know of any occurrence

Do you know of any occurrence in the Civil War where a dying soldier asked a comrade to assume his surname for posterity sake. I was told this happened to my gt gt grandfather who was an immigrant from France. I know that immigrants sometimes assumed names of the dead from tombstones in order to Americanize their name.

Can you recommend any books,

Can you recommend any books, novels or non-fiction, about the practice of substitution during the Civil War?

I recommend taking a look at the "references" & "additional resources" sections at the end of the article for more information.

Thank you for your question. Have you tried checking a database such as Fold3 to see if there is a pension application for your soldier? If there is an application, there might be some information about his service.

How did people find

How did people find substitutes in both the Confederacy and Union? Did you have to approach someone? Did you put an advertisement in the local paper? Was a payment made to the draft office and once payment was received a pool of ready and willing substitutes were selected? I haven't had much luck in finding specifics on this ... thank you for your assistance

Is there any way of

Is there any way of identifying who (the name) of the person for whom a confederate soldier was substituting ? My Great-great grandfather was a substitute for (Unknown) and was killed at Pickets Charge at Battle of Gettysburg in 1863.