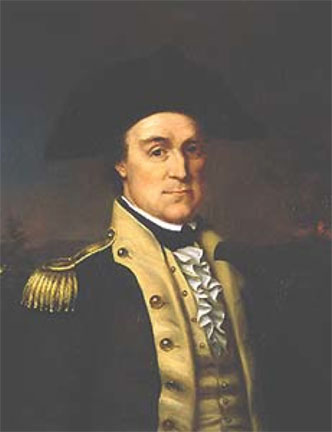 Elijah Clarke, Revolutionary War hero, Indian fighter, and land speculator, was born near Tarboro in Edgecombe County, the son of Scotch-Irish parents. He acquired no formal education. As a young man he moved to Anson County, where he built a home for himself and his family on the edge of the wilderness. Disturbed by many of the grievances that motivated the Regulators, he determined to leave North Carolina and in 1771 moved to a grant on the Pacolet River in Spartanburg County, S.C. He found South Carolina unsatisfactory for farming, so in 1773 he pushed on to Wilkes County, Ga. Here he quickly gained prominence as a captain of the militia and a strong advocate of independence. His reknown grew even more rapidly once the Revolution began; he became a leading partisan commander in Georgia. He was wounded at Alligator Creek in 1778, was largely responsible for the patriots' victory at Kettle Creek in 1779, and was promoted to colonel by General Andrew Pickens. By 1780 he was leading troops in South Carolina, fighting there at Thicketty Fort, Cedar Springs, Camden, and Musgrove Mill, where he was seriously wounded. He also participated in the battles of Fish Dam Ford and Blackstocks, was wounded again at Long Cane, and defeated Major Dunlap—the man who had burned Pickens's home—at Beattie's Mill. In 1781 he returned to Georgia and, with Pickens and Colonel Richard Henry Lee, recaptured Augusta from the British. For his services in the war, North Carolina presented him with a gratuity of thirty thousand dollars and Georgia granted him the plantation of Thomas Waters, a Loyalist.

After the war, Clarke served in the Georgia House of Assembly, fought the Cherokees, negotiated a series of Indian treaties, and was promoted to brigadier general of the militia. At the same time he accumulated vast tracts of land through grants from Georgia and through various land speculating schemes. In 1793, frustrated by Spanish intrigues in Georgia, he joined a venture sponsored by Citizen Genet, the French minister to the United States, to drive the Spanish out of Florida. Clarke resigned his commission in the Georgia Militia to become a major general in the French army at a salary of ten thousand dollars a year. But Genet's recall was soon demanded by the Washington administration, and the plot came to nothing. The following year, Clarke became involved in another scheme to relieve Georgia of an oppressor, this time the Creeks. In the process he hoped to acquire additional lands for himself. He led a body of troops across the Oconee River into Creek territory and even went so far as to draft a constitution and erect a chain of forts in his "Trans-Oconee State" before Governor George Mathews of Georgia, at the request of the federal government, forced the abandonment of Clarke's republic. Clarke returned home without any charges being pressed against him: his popularity in Georgia defeated attempts by some citizens to have him arrested. In 1795, Clarke joined another expedition whose object was the expulsion of Spain from Florida. He organized an army of three hundred men, known as the Sans Culottes, and actually invaded Spanish territory before the scheme was again frustrated by Mathews. He continued to be involved in land speculations until his death at his Wilkes County home. He was buried at Woodburn in Lincoln County, Ga.

Married to Hannah Harrington, Clarke fathered eight children, including John Clark, above. There is a portrait at the Georgia Department of Archives and History.

I am a direct descendant of Gen. Elijah Clarke's brother, Gibson Clarke. My understanding is that he and Elijah fought together in the Revolution and after the war he migrated to Mississippi around 1790.
Would like any information you might have on Gibson, or their parents.
Thanks

Elijah Clarke was my 4th

Elijah Clarke was my 4th great Grandad. I just recently made the connection. We spell our name without the e. I descend from elijah jr.and his son elijah jr. had trouble connecting La to Ga.

Hello!
I'm also a descendent - from John Clarke, Elijah's son.
I was wondering if you have any other information about the family? I just learned about the connection and am hungry for any details.

this is really helpful for

this is really helpful for projects.

this site is really helful

this site is really helful for when you are doing projects on the revolutionary war.

this page on elijah clarke

this page on elijah clarke helped me a lot with my school work. im in the 8th grade and had to do a powerpoint. there was plenty of facts to choose from.

Thanks for letting us know!  I'm glad NCpedia was helpful.