Part 2: First North Carolina Conflicts and the Establishment of a Provincial Government 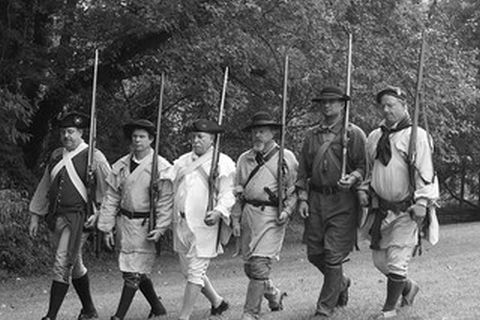 A month before the "shot heard 'round the world," North Carolina's royal governor Josiah Martin had asked for weapons from Gen. Thomas Gage in Massachusetts, but his letter was intercepted by the Whigs, or Patriots, as the radicals were now called. On 31 May 1775 the Mecklenburg County Committee of Safety issued the Mecklenburg Resolves, which asserted that all laws and commissions issued by the British Crown were null and void and that the people should establish their own government and military forces. That same day, Martin sent his children and pregnant wife to New York for protection. During the night of 31 May 1775, Martin left New Bern for the safety of Fort Johnston. The fort was not safe enough, however, and the Patriots began making moves to capture Martin, who barely escaped to a British warship. Three days later, on 18 July 1775, John Ashe and Cornelius Harnett led 500 militia in burning down Fort Johnston. The destruction of the British fort was the first act of war in the North Carolina colony.

On 20 Aug. 1775 the Provincial Congress (the third held since the previous August) met in Hillsborough to further organize North Carolina's war efforts. Headed by Samuel Johnston and including representatives from every county and town, the body agreed to establish a new government and an army, with the Provincial Congress itself being the highest ruling body. When the congress was not in session, a 13-member Provincial Council served as the chief executive authority. Local affairs were managed by the various Committees of Safety.

Two Continental Army regiments were authorized with Cols. James Moore and Robert Howe as commanders. North Carolina was divided into six military districts with a regiment of 100 minutemen each, and the local militia was reorganized with officers commissioned in each county. The colony's new armed forces were quickly put to work. North Carolina troops were dispatched to join with other Patriot troops in Virginia to help prevent that colony's royal governor, Lord Dunmore, from carrying out his plan to arm the slaves against their Patriot masters. The Americans were successful, and Dunmore was defeated at the Battle of Great Bridge on 9 Dec. 1775. On 22 December 700 North Carolina troops moved into South Carolina, joining with soldiers from that colony in defeating a group of Loyalists known as the "Scovellites" in what became known as the Snow campaign.

After these two campaigns outside of North Carolina, the colony's troops were soon fighting closer to home. Governor Martin had drawn up elaborate plans for winning back North Carolina from the Patriot forces, beginning with the important port of Brunswick. His plan called for building an army composed of local Tories (Loyalists), former Regulators, and Scottish Highlanders, all supported by British regulars. Gen. Donald McDonald led his 1,600 Highlanders in a drive toward Brunswick but was met by 1,100 Patriots at Moore's Creek Bridge in present-day Pender County on 27 Feb. 1776. When the battle ended, one Patriot was wounded and another lay dead. The Highlanders, on the other hand, lost about 70 dead and wounded. The Tory force broke and ran all the way back to its base camp, pursued by the Patriots. The remaining Tories surrendered without firing a shot. That day the Crown lost hundreds of guns, swords, knives, wagons, and supplies, as well as 850 soldiers captured, including General McDonald. The Battle of Moore's Creek Bridge was hailed as the "Lexington and Concord of the South."

my name is jeff

my name is jeff