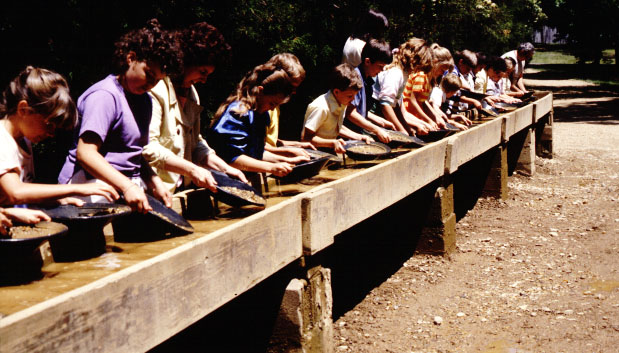 The bill was initially introduced by Senate Majority Leader Harry Brown of Onslow County on behalf of a fourth-grade class at Clyde Erwin Magnet Elementary School. While a majority of senators were in favor of the adoption, four voted against the bill, citing the opposition of other mineral industries, such as quartz and feldspar, in their constituencies.

At least two other states have designated gold as their state mineral - Alaska and California.

The discovery of gold by a twelve-year-old boy in 1799 in Cabarrus County started North Carolina's gold rush. The boy's name was Conrad Reed, and the location developed into the Reed Gold Mine.

Following the discovery, North Carolina remained the only gold producing state in the union until 1828, and the top producing state until the California gold rush of 1848.

While other minerals such as pyrite and yellow mica can be frequently mistaken for gold, the mineral has several defining characteristics. It is soft, measuring a 2.5-3 on the Mohs scale of hardness, but is also a heavy mineral, with a 19.3 specific gravity when pure. Unlike pyrite, gold extremely pliable and can be molded into sheets without breaking. It is also largely insoluble, only breaking down in a mixture of hydrochloric and nitric acid.

my gosh can you guys believe

my gosh can you guys believe a 12 year old started the gold rush?
I cant no I can not

cool but u need to show real

cool but u need to show real pictures of the actual mineral cause when the ppl pan for it, you cant actually see it . I need pictures to print for my project . quick plz bcuz this project is due in a week send me some links or somethin I need helpful information plz Ncpedia help quick like rn

Thank you for visiting NCpedia. The Smithsonian’s National Museum of American History has a link with more information and a picture. Please see:

what type of mineral ?

what type of mineral ?

More info I love gold I dig for gold

i love your information

i love your information

i like this because it is a very cool site