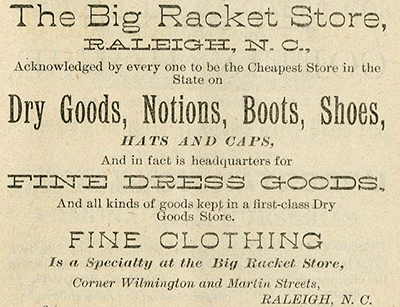 Racket stores were individually owned and operated retail businesses carrying a large assortment of merchandise not unlike that of a country store or, later, a five-and-dime store. Racket stores offered shoes, dry goods, groceries, hardware, tableware, pots and pans, washtubs, ladies' and men's ready-to-wear clothing, and other merchandise at low prices. The earliest known use of the term was in Asheville, where an establishment called the Racket Store opened in 1887. In May 1888 William Henry Belk opened a store in Monroe called the New York Racket. "New York" was included in the name apparently to suggest class. There were also racket stores in Charlotte and Statesville; these stores apparently closed before 1929, but the one in Asheville was in operation as late as 1937. Racket stores appeared elsewhere in the South, but there seem to have been none in the North.

What an interesting article!

What an interesting article! I have a mint condition flow blue deep serving bowl from the 1880s that has the original Racket Store price tag still attached. The bowl was never used and never washed and has always been a china cabinet display piece. The tag says "The Racket Store- Eaton, Ohio". This is fascinating to me since my family were pioneers of the Eaton, Ohio community and we can find no record of a Racket Store in Ohio, much less in Eaton. In researching Eaton, Ohio history nobody can recall a Racket Store in Eaton and (other than the bowl with the price tag attached) there is no record of the store being in Eaton, Ohio. The original price tag indicates the piece sold for 30 cents. In the 1980s it was sold by the descendants of the original owner to a collector for $50. The collector placed the bowl for sale for $75 in 2015. I was able to purchase the bowl for just over $35. Today, the bowl is appraised for $175-$225.

So glad to find this! My

So glad to find this! My grandpa used to say his "pappy" worked in a "racket store" in Oklahoma Territory before statehood. We always wondered what it was, assuming it didn't refer to equipment used in the tennis game.

Thanks for visiting NCpedia. We are glad that it was super helpful.

My Grandfather, Zenas E. Keck, had a variety store at 105 N. Main Street in Bentonville, Arkansas in the early 1900s which he closed in 1918. It was referred to as a “racket” store and in the 1950s was the location where Sam Walton opened his first Bentonville “Walmart”.

Moville Iowa has a Racket

In 1918, my grandfather co-owned the "New York Racket Store" in Hillsdale, Michigan.

The little town of Star, N.C.

The little town of Star, N.C., in Montgomery County, had a racket store called "London Racket," with B.L Spencer as proprietor in 1896. I have a copy of a letterhead from there.

Nannibel's Racket Store operated in Summerville PA from sometime after the Civil War until Nannibel's death in 1950.

I bought penny candy there as a child in the '40s.

As to the earliest and the

As to the earliest and the North, George C. Shaler had a 'Racket Store' in Gilboa, NY. It was open in 1867 according to NYS business listings. After the local paper started in late 1878, his ads can be seen in its pages. That paper is the Gilboa Monitor, available online. Also see article on Shaler in the Gilboa Historical Society Quarterly, Summer 2016.