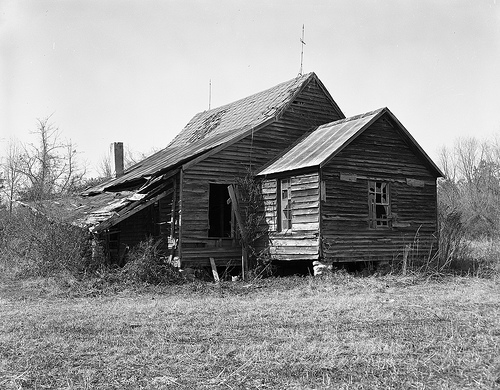 Isaac Hunter, planter, was probably the son of Theophilus Hunter, although the place of his birth and the name of his mother have not been recorded. He was first known to be in present Wake County when he acted as a chain bearer for the survey of 584 acres of land north of Crabtree Creek for which Theophilus Hunter had made application to Earl Granville. The land was granted to Theophilus on 21 July 1761, and he deeded the property to Isaac for £12 convention money on 3 Mar. 1762. Seven years later, on 28 Feb. 1769, Isaac Hunter was authorized by the Johnston County Court to open a tavern at his dwelling house.

Hunter acquired large tracts of land in the vicinity of and north of Crabtree Creek, including a mill site from John Giles Thomas which was later sold to Durrell Rogers, Hunter's son-in-law. Another mill site near where Crabtree Creek empties into the Neuse River was sold to Joseph Gales, who converted it into a paper mill.

Hunter's tavern was located on the Cross Creek to Petersburg stage road, and evidently was a well known and popular stopping place. In 1788, when the Hillsborough Convention was held to consider the ratification of the United States Constitution, it was also to fix the unalterable seat of government of the state. After it was determined that the convention would not select a particular point but would leave the choice to the General Assembly, provided that it be within ten miles of the place named, seven locations were nominated, including that of Isaac Hunter in Wake County, proposed by James Iredell. On the second ballot, Hunter's tavern was named as the place within ten miles of which the permanent capital of the state was to be located.

The commission chosen by the General Assembly to select the actual site of the capital met at Hunter's house on 22 Mar. 1792. He apparently hoped to sell a site to the state for the permanent capital, but the commission almost immediately adjourned to the house of Colonel Joel Lane, although its members viewed Hunter's land with other sites the next day. The state, however, bought 1,000 acres from Lane. Hunter eventually sold the tavern property to William Camp, the first husband of his daughter, Elizabeth.

Although Hunter had had extensive landholdings in Wake County, he began to dispose of them, apparently to meet his debts and expenses. In 1800, for example, he traded 627 acres to James House of Franklin County for a stud horse named Rufus. By 1822, his property was reduced to 650 acres and two slaves.

Family tradition indicates that Hunter was married twice, but this fact cannot be documented. By his first wife, Rebecca Hart, Hunter had seven children: Jacob, David, Alexander, Michael, Pherebee, Delilah, and Rebecca. By his second, Charlotte Thomas, he fathered Anderson, Norfleet, Elizabeth, Louise, Charlotte, and Frances. He was survived only by his sons Norfleet and Michael and by his daughter, Elizabeth Rogers.

At the time of his death, Hunter had a reputation for intemperance, which apparently contributed to his death. He was heavily in debt when he died, and by 1825 his remaining property was sold to settle his accounts.

Thank you for visiting NCpedia and especially for taking time to share this information.

This issue has been commented on by other viewers as well. I have done some looking into the matter and have not come up with anything conclusive that I can use to update the entry.  If you have some specific references and documents that you have seen that point in this direction that I could look at, that would be very helpful.  It is very difficult to vet some changes to family history in this time period! And unfortunately, we are not able to conduct full genealogical searches in many of these cases.