Hoyt Patrick Taylor, Sr., lieutenant governor, state senator, and attorney, was born in Winton, the Hertford County seat, the son of Simeon Pipkin and Kate Ward Taylor, of Scots-Irish ancestry. His mother was the sister of Hallet (Hot Stuff) Ward, a former congressman from Washington, N.C. Young Taylor attended Winton High School and Academy and Horner Military School. After graduating in 1906 he had intended to enter The University of North Carolina, but "economic circumstances" thwarted that ambition. Instead, he went to work for his father, who was in the timber and lumber business and was an expert timber cruiser, for two years, mainly in the Pender County area. 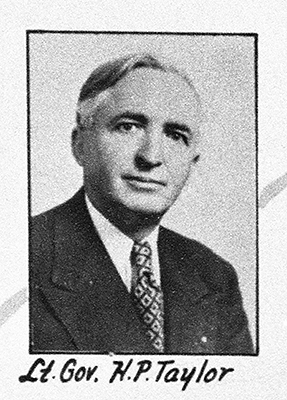 At age seventeen Taylor took a job as a hotel clerk at the Colonial Inn in Wilmington. About a year later he became a clerk at the old Lafayette Hotel in Fayetteville, where a representative of the Fred Harvey hotel chain persuaded him to accept a clerk position in Needles, Calif. Taylor remained there for two years before homesickness and an urge to study law lured him back to North Carolina in 1912. That summer he worked as a vacation relief hotel clerk in Raleigh, Rocky Mount, and Morehead City. In the fall, the twenty-two-year-old, armed with only a high school diploma, enrolled at Wake Forest College Law School. There he established a close friendship with a fellow student, Roland S. Pruette. Six months before Taylor was graduated, Pruette received his law degree and went to Wadesboro to establish a practice. During his final months at Wake Forest, Taylor became familiar with the Anson County town and county seat largely because of Pruette's anecdotes and descriptions of the place. After receiving his law degree and admission to the state bar in February 1914, he also moved to Wadesboro and began working in the law office of Fred J. Cox.

Two weeks after joining Cox, Taylor won a civil case. About sixteen months later he formed his own practice, which eventually became known as a breeding ground for young lawyers who later branched out on their own. His office became the firm of Taylor, Kitchin and Taylor, which included former Eighth Congressional District Representative A. Paul Kitchin and Taylor's son, H. Patrick Taylor, Jr., who followed in his father's footsteps by working his way up the General Assembly ladder and reaching the lieutenant governorship in 1969. The elder Taylor continued to practice law in Wadesboro until the advent of World War I.

Taylor entered the U.S. Army in May 1917, completed officers' training at a camp in Fort Ogelthorpe, Ga., and became a second lieutenant. In January 1918 he began a ninety-day program to prepare him for overseas service. In April he was assigned to the 371st Infantry Regiment, a black unit led by white officers, and sailed for France. Under French command, Taylor and his regiment were first positioned in the Argonne Forest region on 2 June. On 12 September they were sent to the Champagne sector. About two weeks later First Lieutenant Taylor was wounded after being gassed and struck on his right side by shrapnel. Concerned about his injuries, the battalion commander instructed him to withdraw from combat, but Taylor chose to stay with his company for two more days. On 29 Mar. 1919 he was promoted to captain and awarded the Purple Heart and Silver Star for gallantry in combat by General John J. Pershing. His regiment received the French Fourragère.

On returning to Wadesboro in 1919, Taylor discovered that he had been elected mayor of the town; he served until 1921. On 28 June 1923 he married Inez Wooten of Chadbourn, Columbus County. In addition to Hoyt Patrick, Jr., the couple were the parents of Caroline Corbett and Frank Wooten. Caroline studied at the Julliard School of Music in New York City; having performed solo on a number of occasions with the North Carolina Symphony orchestra, first at age ten, she eventually became a world renowned pianist. Her brother Frank was ill most of his life and died young, whereas Pat became a key player in North Carolina politics for about two decades.

Until 1936 Taylor remained a political fixture in Anson County, serving as county attorney and chairman of the Anson County Democratic executive committee. In 1936 he was elected to represent the Nineteenth Senatorial District in the General Assembly and began his tenure by serving in the special session of that year. During the 1937 regular session Lieutenant Governor Wilkins P. Horton appointed him chairman of the committee on institutions for the blind and later chairman of the calendar committee. Taylor returned to the senate for the 1938 special session and was reelected and installed as chairman of the finance committee for the 1939 regular session. Due to Anson County's rotation with a neighboring county for the district's senate seat, he did not reappear in Raleigh until the 1943 session. He was named chairman of the appropriations committee before that session convened. Taylor remained on the advisory budget commission and division of purchase and contract in 1943–44; he had previously served on the commission and division in 1939–40. His work received much praise; at the end of the 1939 and 1943 sessions, members of the state press voted him the most valuable member of the senate.

After completing his term Taylor returned to Wadesboro and continued practicing law. He maintained his involvement as a member of the Wadesboro Rotary and Executive Clubs, and of Anson County Post No. 31, American Legion, of which he was a charter member. Additionally, he belonged to Woodmen of the World, Phi Delta Phi legal fraternity, the Ancient Free and Accepted Masons, the Carolina Consistory, and the Oasis Temple of the Shrine. For about twenty-five years he taught the Baracca Class at the First Baptist Church, Wadesboro, where he served on the board of deacons. At age seventy-three Taylor died at his home; he was buried in Eastview Cemetery.

This photo is one of Hoyt P.

This photo is one of Hoyt P. Taylor, Jr. - not Sr.
Jr. also served as Lt. Gov. under Governor Bob Scott. There is a photo of Sr. in the State Manual books but surely Archives has a much better image that can be used.

Thank you for catching this!  I have just removed the photo and am looking into a replacement.