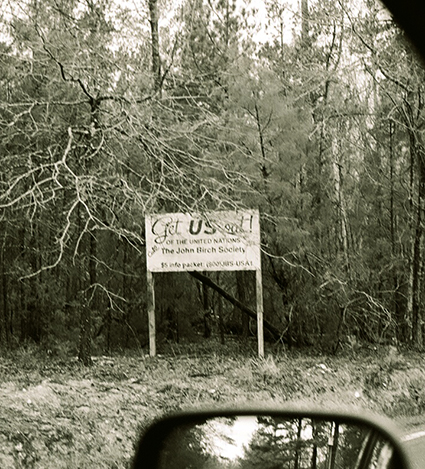 The John Birch Society was founded in Indianapolis on 9 Dec. 1958 by Robert Henry Winborne Welch Jr., a Fundamentalist Baptist born in Chowan County and a graduate of the University of North Carolina at Chapel Hill. The society was named after Capt. John Birch, a missionary from Macon, Ga., who, while serving as a U.S. intelligence officer, was killed by Chinese communists ten days after V-J Day. At the founding, Welch-a retired Boston candy manufacturer-addressed 11 businessmen from a number of states in a marathon 17-hour speech (over two days), which he later published as The Blue Book of the John Birch Society. Birch, according to the society, was the first hero of the Cold War. In setting forth to his captive audience the background, methods, and purposes of the society, it was clear that Welch was obsessed with the political threat to America that he believed communism posed.

In addition to supporting various anticommunist causes and haranguing political leaders who did not share the opinions of its members, the John Birch Society also advocated a return to minimum federal government and repeal of the federal income tax and social security. It opposed federal aid to education, sex education programs in the schools, the civil rights movement, and the Equal Rights Amendment (in North Carolina and the nation).

At its height in the mid-1960s, the John Birch Society's total membership was estimated to be 100,000. In the mid-1970s, the Raleigh News and Observer estimated North Carolina's total members at 2,000 to 4,000, many of them in the Rocky Mount area. Other cities around the state, including Charlotte, Greensboro, Raleigh, Asheville, Burlington, and Kinston, had active chapters at one time or another. After the late 1960s, society members grew openly unhappy with Welch's autocratic rule, and since Welch's death in 1985 the John Birch Society has been sinking into obscurity, both in North Carolina and throughout the nation.

Gerald Schomp, Birchism Was My Business (1970).

Is there still a contingent

Is there still a contingent if the JBS in Alamance Co. NC if not where is the nearest active group I would like to fellowship with them.
Thanks Luke

Thank you for visiting NCpedia and posting your question.  Here is the link to the website for the John Birch Society -- https://www.jbs.org/local-chapters -- for more information.