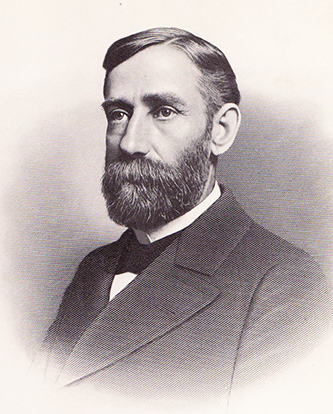 Lewis Lyndon Hobbs, educator, religious leader, and college president, was born one mile west of Guilford College, the youngest of nine children of Lewis and Phoebe Cook Hobbs. His father taught in the "little brick schoolhouse" at New Garden (later Guilford College), and was a man of above-average education and spiritual refinement. Lewis Lyndon inherited his father's love of learning and, after her husband's death, Phoebe Hobbs nurtured it in the tradition of the Society of Friends.

Young Hobbs attended New Garden Boarding School as a day student and was graduated in 1876 from Haverford College, where he later (1882) received a master of arts degree. He returned to New Garden as a teacher of Greek, Latin, and mathematics, and in 1878 was chosen principal of the Quaker school, a post he held until 1885. When New Garden's charter was changed to that of a four-year college in 1888, he was elected its first president; he served in that post until his resignation in 1915. In 1908 he was awarded an honorary doctor of laws degree by both Haverford College and The University of North Carolina.

Under Hobbs's guidance, Guilford College grew in enrollment, faculty, endowment, buildings, and equipment, and was recognized throughout the state for academic thoroughness. During this period of quantitative growth, however, Hobbs never lost sight of the worth of each student and was always concerned that the students develop all their capabilities. His effective service as president was paralleled by his participation in the affairs of the Society of Friends. At age twenty-seven he was chosen clerk of the New Garden Monthly Meeting and assistant clerk of the North Carolina Yearly Meeting of Friends; he served as clerk of the Yearly Meeting for forty-eight years. In addition, he was a member of various committees of the Meeting, and held the office of trustee for fifty-two years. It was said that as presiding clerk he listened with patience, discernment, and a clear interpretation of the matters at hand; as a result, business sessions ran easily, with a sense of unity and peace.

Hobbs worked tirelessly for the improvement of public schools. He spent much time in personal persuasion and made many addresses in their behalf. Partially because of his efforts, the first tax levied in North Carolina for a rural graded school was in Guilford County, and went for the elementary school at New Garden, among others. He also served as a member of the Guilford County Board of Education and for four years as a member of the first state board of examiners for public school teachers.

Are there any pictures of

Are there any pictures of "Arcadia, the home of Mary Mendenhall Hobbs and Lewis Lyndon Hobbs? They are ancestors of mine. I am doing family research and would like to find a picture of their home. Thank you.

Thank you for visiting NCpedia and especially for taking the time to share your ancestry and research question.

I am connecting you by email with Reference Services at the Government & Heritage Library at the State Library of NC.  A reference librarian will contact you shortly to try to assist you with this.