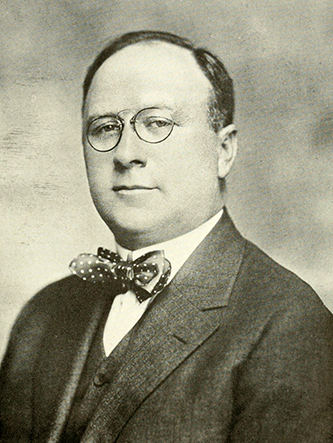 Sidney Halstead Tomlinson, Sr., High Point furniture manufacturer, was born at Bush Hill (now Archdale) in Randolph County. He was descended from a pioneer Quaker family that emigrated from England to America in 1752 in search of religious liberty. The progenitors of the Tomlinson family in America were Josiah and Olive Unthank Tomlinson (the great-great-grandparents of S. H. Tomlinson, Sr.), who landed at Charleston, S.C. In 1786 their eldest son William Allen, who had married Martha Coppock, relocated in Piedmont North Carolina. William Allen Tomlinson became the first landowner in the Quaker settlement of Bush Hill, having received a grant of three hundred acres from Governor Samuel Johnston. He and his progeny engaged in farming and light industry, operating a tannery throughout most of the nineteenth century and for many years a shoe factory in conjunction with the tannery. The Tomlinson family was characterized by industry, thrift, and prosperity; its members were devoted to the Quaker faith and to the cause of education.

Allen Josiah Tomlinson, the father of S. H. Tomlinson, took a prominent part in the work of Maryland Quakers who sought to promote elementary and normal school education among their North Carolina brethren. He founded the successful Sylvan Academy at Cane Creek in Alamance County. In 1869, during his junior year at Haverford College, he became principal of the Friends' Academy in Damascus, Ohio. There he met and married Anna Fawcett, a daughter of Simeon and Deborah Fawcett. In time, Tomlinson and his bride returned to North Carolina, where he taught school and operated the family tannery. After his death it was reported that "Allen Josiah Tomlinson was teacher and friend in general to the young people of the state. He was a genial spirit wherever he went. His good judgment and consideration for others brought him many duties in church and neighborhood. His influence and impression on the lives of his students were an ever-widening circle going on and on."

It was to this rich birthright that Sidney Halstead Tomlinson was born. Inspired by the lore of family legend, he early demonstrated ability and the desire to excel. He was educated at Old Trinity (a school that was later moved to Durham and became the nucleus of Duke University) and at Guilford College, where, in 1898, he received the B.S. degree in business administration and accounting. At Guilford he was a student leader in a variety of campus activities. After graduation he became a salesman for the Globe Home Furniture Company of High Point, then the largest company of its kind in the South.

Two years later, while in his mid-twenties, he launched an independent career that proved to be both innovative and highly successful. His efforts led in two directions—the more imaginative marketing of furniture products and furniture manufacturing. First, in light of his experience as a Globe salesman, Tomlinson responded to the need for better methods; he trained men in the marketing of furniture by organizing a sales agency. This agency, located in High Point, employed several traveling professionals who sold High Point furniture throughout the South. The step from selling furniture to manufacturing was a logical one. In 1900, with capital resulting from the sale of the family tannery and shoe factory following his father's death, S. H. Tomlinson organized the Tomlinson Chair Manufacturing Company. With capital estimated at between $8,000 and $10,000, the company began production in a two-story, sheet-iron covered building with 18,000 square feet of space. The total volume of business in the first year's operation was $48,000. In this venture Finley Tomlinson, an uncle, was initially president, and S. H. Tomlinson was secretary and treasurer. Soon "Mr. S. H.," as he was known to his employees and associates, became president of the Tomlinson Chair Manufacturing Company (later Tomlinson of High Point and then Tomlinson Furniture), a position he held until his death nearly half a century later. In 1904 he persuaded his brother, Charles F. Tomlinson, to join the company as secretary and treasurer. This vital partnership was disrupted when Charles died in 1943.

The growth of the Tomlinson company was remarkable. In 1911 the Tomlinsons bought the Globe Home Furniture plant, which occupied an entire city block. Over a four-year period the plant was remodeled, and the Tomlinsons had the facilities to enter the highly competitive national market. In 1916 the company innovated the manufacture of dining and living room suites of matching design. Tomlinson furniture, already characterized by excellent craftsmanship, achieved more distinctive styling year after year until the line was fully developed. Period furniture became a company hallmark as fine adaptations of eighteenth-century English, French, and American styles were produced. To display this furniture to advantage the Tomlinsons had, in a prophetic move in 1904, opened High Point's first furniture exhibition. Subsequently the company pioneered the later industrywide practice of displaying its line in gallery form. With excellence in design and craftsmanship, imaginative marketing, and good management, the Tomlinson name gained national and even international prominence. At the time of his death S. H. Tomlinson had approximately eight hundred employees and a modern physical plant with a floor space covering eleven acres. The company maintained two permanent displays—one at the Chicago Merchandise Mart and the other at the Tomlinson Exhibition Building in High Point. A local anecdote—whether true or apocryphal—suggests the fame of Tomlinson furniture. It seems that a wealthy High Pointer was determined to furnish her home with the world's finest furniture. After extensive shopping abroad, she selected an elegant suite offered by a fashionable Paris gallery. The furniture was purchased and imported at great expense. Only after the arrival of this elegant living and dining room suite was it discovered that the manufacturer was Tomlinson of High Point.

Active in civic and church affairs, S. H. Tomlinson was a founder of the High Point YMCA. He was an original stockholder-director of the High Point Hotel Company and a charter member of the Emerywood Country Club. True to his Quaker heritage, he was a member of High Point's Friends Meeting, but he maintained his interest in his ancestral meeting at Springfield, where he was a birthright member. For many years he was vice-president of the Springfield Memorial Association and instrumental in establishing an endowment for that venerable Quaker institution. In politics he was a Democrat who believed in economic self-determination.

Past week purchased at

Past week purchased at auction in Charlottesville, Va., a red leather wing back chair by
Tomlinson with label indicating mfg. 1949. Chair is in almost pristine condition excepting
light wear on arms. An object of fine design and durability both in structure and quality of leather. Probably, with care, will endure a good long time.

I own a full oak dining room

I own a full oak dining room suite (table, chairs, sideboard, and china) mfged by Tomlinson Chair Mfg., a name dropped around 1916. I went to Tomlinson elementary school in High Point; and the Barker family did some business in the day as Guilford Furniture Co. nearby the railroad station in HP. Abner Barker was a Quaker of same MM. Not for sale, just noticed last name and Tomlinson. jb