by Bland Simpson and John Hairr, 2006

See also: Our State Geography in a Snap: Bodies of Water; Lake Mattamuskeet 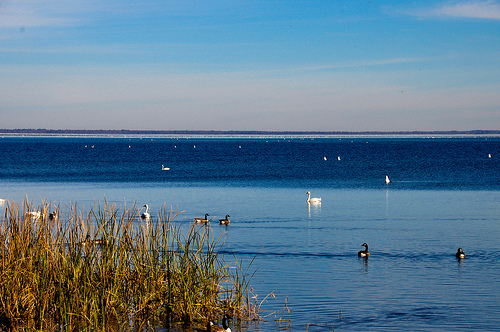 Lakes can be found in virtually every part of North Carolina, although all of the state's natural freshwater lakes of consequence are located in the eastern region of the state. Most North Carolina lakes are relatively shallow bodies of water. Several of the lakes in the southeastern part of the state are examples of the unusual geographic features known as Carolina Bays. Used primarily for sports and recreation, the five largest natural freshwater lakes in North Carolina are Lake Mattamuskeet (30,000 acres), Scuppernong Lake (16,600 acres), Lake Waccamaw (8,938 acres), Alligator Lake (6,000 acres), and Pungo Lake (2,700 acres).

Lake Mattamuskeet in central Hyde County, the largest of North Carolina's natural lakes, is shallow, with a maximum depth of five feet, and sits at an elevation of three feet below sea level. Efforts to drain Mattamuskeet for farming date as far back as 1789, and the Southern Land Reclamation Company built an enormous pumping station, with a 125-foot smokestack, at the lake's western end between 1909 and 1916. Southern Land failed, though, selling out to North Carolina Farms in 1918; that firm in turn sold out to New Holland Corporation in 1923. Four enormous steam engines of nearly 1,000 horsepower apiece, in league with attendant drainage canals, finally succeeded, and 12,000 acres of Lake Mattamuskeet's bottom was under cultivation-with rice, wheat, rye, and the biggest soybean crop in the world-when Franklin D. Roosevelt was elected president in 1932. But rainfall, pestilence, and mud caused the New Holland farmers to decide that keeping the water out of the lake bed was too difficult to continue.

Lake Mattamuskeet took little time to refill its shallow declivity and has long been one of North Carolina's favorite hunting and fishing grounds. In 1934 its swampy land became a wildlife refuge (with controlled hunts). Waterfowl populations vary from year to year, with the annual December count of geese, swans, and ducks reaching the tens of thousands.

West of the fall line, most large bodies of water in North Carolina are man-made, created when several of the state's rivers were dammed for either drinking water, flood control, or hydroelectric power. The five largest artificial lakes lying entirely within the borders of North Carolina-all popular tourist destinations-are Lake Norman, High Rock Lake, B. Everett Jordan Lake, Falls Lake, and Fontana Lake. Located northwest of Charlotte and created in the 1960s, Lake Norman is the state's 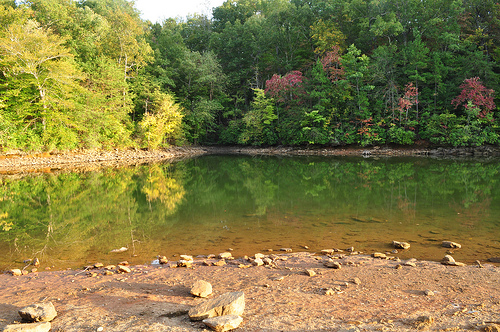 largest man-made lake, covering 32,510 acres. High Rock Lake, nine miles from Lexington, stretches across 18,000 acres and has often been the site of one of the world's most prestigious fishing competitions, the BASS Master's Classic. With 13,942 acres, B. Everett Jordan Lake, originally New Hope Lake but renamed in 1973 in honor of the former North Carolina senator, stands mostly in Chatham County. Jordan Lake has several beaches and is popular among waterskiing enthusiasts. Falls Lake, spreading over 11,310 acres, was created from the 1981 damming of the Neuse River to minimize flooding problems in the area just north of Raleigh. Fontana Lake, created in the 1940s and located along the southern border of Great Smoky Mountains National Park, spans 10,530 acres and boasts the highest dam east of the Rocky Mountains.

Phillip Manning, Afoot in the South: Walks in the Natural Areas of North Carolina (1993).

We like to kayak in NC but it's disappointing that all the lakes and rivers we have been to are brown. Is there any blue water in the state? And just why does the water look like this?

Many of the lakes and river

Many of the lakes and river in eastern NC are that color because of the tannins from pine trees that leach into the water ways. It is natural.

How many lakefront homes are

How many lakefront homes are on High Rock Lake in North Carolina?

I hope this helps!  Please let us know if you have additional questions.

How would you go about

How would you go about getting the name of a lake changed? I live on the south side of Lake Property and would love to get the name changed to something with a little more character.

Thanks for visiting NCpedia and sharing your question. That's a great question, unfortunately NCpedia doesn't have any information that would help.

You  may want to contact your local county government to see if they can help you.

how many lakes are in north

how many lakes are in north carolina

That's a really good question.  Part of the answer depends on how we define lakes. North Carolina has a number of natural freshwater bodies, a number of large manmade lakes, mill ponds that were made by damns created for mills, and other freshwater depressions.

In the eastern part of the state there are numerous natural freshwater lakes, these range from the Carolina Bay lakes to peat depressions.  Most of the state's natural lakes are east of the geologic fall line (genearlly, where the Piedmont meets the Coastal Plain) and to the west, most of the large bodies of water are manmade from damns.

Here are search results in NCpedia related to the states lakes: http://www.ncpedia.org/gsearch?query=lakes.  You might find this helpful.

You might also be interested in this map of NC lakes from the state's Department of Environmental Quality.  It shows lakes that have water quality monitoring -- and while it doesn't include all freshwater bodies, it does give an idea of the distribution of lakes across the state: http://www.arcgis.com/home/webmap/viewer.html?webmap=9dbc8edafb7743a9b7e...