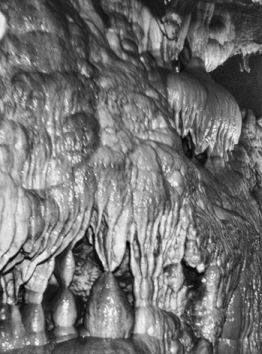 Nearly 900 caves and caverns are known to exist in North Carolina, although only a small number are accessible to the public. Linville Caverns, which lies deep within Humpback Mountain in McDowell County, is the most popular underground system in the state. The caverns, which stay at a consistent 52 degrees year round, have been developing intricate stalactite and stalagmite formations over the centuries with names like Frozen Waterfall, Natural Bridge, Franciscan Monk, Monster's Hands, and Shepherd. An underground stream running through the caverns is home to blind trout. Small bats cling to the cavern walls. 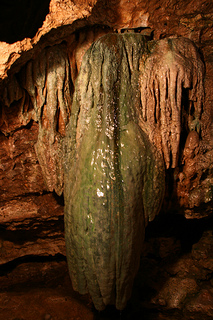 The first recorded exploration of Linville Caverns was made by H. E. Colton, a native of eastern North Carolina, and his local guide, Dave Franklin, in the mid-1800s. During the Civil War, the caverns served as a refuge for deserters from both Union and Confederate armies. According to local legend, an old man lived in the caverns, making and mending shoes for the soldiers. Linville Caverns opened as a tourist attraction on 1 July 1939. Less than a year later, a flood devastated the site and destroyed many nearby homes and businesses. Linville Caverns eventually reopened, becoming one of the most popular attractions in the northern mountains or "High Country."

Comprised of igneous and metamorphic rocks, Bat Cave in Henderson County is the largest tectonic cave in the state. Mapped passages extend nearly 1.4 miles, and the largest chamber on record is 330 feet long and about 85 feet high. Bat Cave was once the home of a large flock of bats, but most have been driven away or killed by intruders. Rattlesnakes are said to take refuge in the cave during the winter. Privately owned, the cave is protected by the North Carolina Nature Conservancy, which restricts visitors to occasional guided tours.

Another well-known site is Boone's Cave, which overlooks the Yadkin River in 110-acre Boone's Cave State Park in Davidson County. The cave's entrance is 2 to 3 feet high; the cave itself is about 80 feet long and varies in height from 4.5 feet near the entrance to less than 1 foot near its farthest point. It is very narrow, and explorers must crawl along most of the passageway. Legendary frontiersman Daniel Boone is said to have hidden from Indians in the cave, which was also known as "Devil's Den."

Boone’s cave has been closed

Boone’s cave has been closed off due to vandals! You can now only view the entrance to the cave. The park is still open.

I was wondering if you were

I was wondering if you were familiar with Wikicaves and its website ( Grottocenter : http://www.grottocenter.org ).The UIS and WikiCaves are working together to develop a comprehensive and global source of cave and karst information, with open free access, adherance to standards with specific protocols for each country, for the benefit of the caving, research and cave management communities.

We have already collected information on over 50,000 caves in more than 86 countries and made it available to the caving community worldwide !
So far …

Over 50,000 caves.
More than 86 countries.
Over 2,100 contributors from around the world.
Eight languages available on the database website.
Data is now hosted on a mature commercial server.

How about you ? Would you like to support out project and add some caves in your country ?
You could get involved, contribute to collective knowledge and be part of a great project !

This is good but not too

This is good but not too INTERESTING.