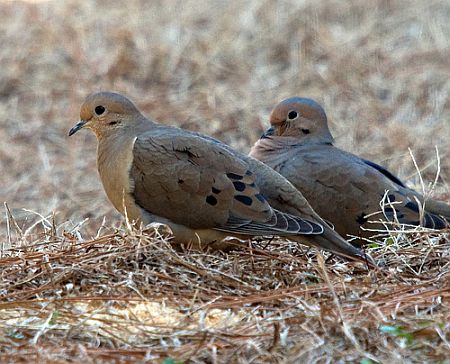 With a great diversity of land forms, climate, and vegetation, North Carolina has habitats suitable for a remarkable variety of birds-by some estimations, approximately 80 percent of all species occurring in eastern North America. Slightly more than 10 percent of species on the official list are hunted as game birds. Bird watching is one of the most popular hobbies in the United States, with millions of dollars spent on the activity each year. From waves of spring migrants flowing through the Blue Ridge Mountains to the spectacular winter accumulations of waterfowl on the coast, North Carolina offers a breathtaking display of bird life that provides great enjoyment to its bird-watching citizens and many visitors from other states and nations.

The composition of the bird population in North Carolina is constantly changing. It is usually broken down into residents, summer visitors, winter visitors, transients, and stragglers. Residents, meaning species rather than individual birds, are present year-round. For example, the American robins that are present in the state during the summer usually move south in the winter and are replaced by northern birds. Summer visitors are found only in the summer months and usually breed in North Carolina. Winter visitors spend the winter months in the state and include many of the ducks, geese, and swans that are hunted as game birds. Transients pass through the state during spring and fall migration as they travel to breeding grounds in the North or wintering territory in the South. Although most migratory birds follow the same routes in spring and fall, a few vary their routes and will pass through the state in only one season. Despite extensive study, bird migration is still not fully understood. Stragglers or accidentals are birds that have wandered outside their usual range.

Although most changes in the range occupied by birds occur naturally, humans sometimes become the change agent, as with the introduction of the house sparrow (1850) and European starling (1870) from Europe. One of the more interesting cases is that of the house finch, a western species that was illegally trapped and shipped by California cage-bird dealers to New York for sale as "Hollywood finches." When the traffic was stopped by the U.S. Fish and Wildlife Service under the Migratory Bird Treaty Act, some dealers on Long Island released their birds in 1940. These house finches flourished and gradually spread south. First seen in North Carolina in the winter of 1962-63, the house finch now breeds throughout the state.

The nineteenth-century slaughter to near extinction of gulls, terns, egrets, and other species for their feathers, used in the millinery trade, raised concerns that resulted in legal protection for nongame birds. In North Carolina, T. Gilbert Pearson assembled an interested group on 11 Mar. 1902 to form the Audubon Society of North Carolina. At its request, the state legislature in 1903 passed a law providing for full protection of nongame birds, nonresident hunting licenses, and a system of wardens to enforce the law. This statute was the forerunner of today's management program administered by the North Carolina Wildlife Commission. Migratory birds are protected under the U.S. Migratory Bird Treaty Act (1918), and the role of the federal government has been broadened more recently by such laws as the Endangered Species Act (1973). In addition to government agencies, many private organizations, including local chapters of the National Audubon Society, Carolina Bird Club, Inc., North Carolina Wildlife Federation, Ducks Unlimited, and Nature Conservancy, play an important role in bird conservation and habitat protection.

The subfamily Accipitridae includes hawks, eagles, ospreys, and kites, diurnal raptors that have hooked beaks and hooked claws. In North Carolina, the species most common are the sharp-shinned hawk, cooper's hawk, and northern goshawk. A second subfamily of hawk, Buteoninae, encompasses a group generally referred to as "buteos" or "buzzard hawks." These large, thick-bodied hawks have long, wide wings and short tails; they are often seen soaring high in the sky, scanning the area for prey. Species in the state include the red-tailed hawk, rough-legged hawk, and red-shouldered hawk.

The bald eagle (Haliaeetus leucocephalus) is by far the largest of the hawks that inhabit North Carolina. Mature birds are easily recognized because of their great size, their white heads and white tails, and their massive yellow beaks. Eagles feed mainly on birds, small mammals, and fish. Their great flying speed allows them to capture waterfowl in flight and even rabbits that are running for cover. In North Carolina, eagles are most easily seen in the Lake Mattamuskeet area, although they reside-never in large numbers-in many places in the state.

The osprey (Pandion haliaetus), frequently called "fish hawk" or "sea eagle"-the only member of the family Pandionidae-is one of the most widely distributed raptors in the world, being present on all continents except Antarctica. In North Carolina, the osprey is found only on the Atlantic coastline, as it rarely lives far from the ocean, though many nest and hunt in the bays and rivers just inland.

Wild turkeys (Meleagris gallopavo), the largest game birds in the United States, are native to America and the ancestors of all domestic turkeys. Due to unrestricted hunting and habitat destruction from the clearing of forests, the wild turkey all but disappeared from many sections of North Carolina from the 1880s to the 1920s. In 1937 the Pittman-Robertson Act established funding for wildlife restoration and research. Despite earlier efforts to restore wild turkey populations in North Carolina, they only began to flourish in the 1970s and 1980s, largely due to the National Wild Turkey Federation, which acquired wild turkeys from other states to supplement states in need of birds, and moratoriums placed on turkey hunting. By the twenty-first century, North Carolina's turkey population was well on the way to being fully restored.

Fred C. Rohde and others, Freshwater Fishes of the Carolinas, Virginia, Maryland, and Delaware (1994).

Seen this bird many times at

Seen this bird many times at Holden Beach. Brown on back with lighter breast. White wingbars when in flight. Also dark line thru eye. Perched on roofs or posts and sings very complex song. Would love to know what he is. I’ve been asking for years and no one knows. Hope you can help. Thanks.

I think the bird you are

I think the bird you are asking about is a Least Tern. I have never heard one sing but they r beautiful.

Is the above statement really

Is the above statement really accurate: "The bald eagle (Haliaeetus leucocephalus) is by far the largest of the hawks that inhabit North Carolina. " I ask because genus Haliaeetus seems to only include eagles.

Thank you for bringing this to our attention. I would guess the original author meant something like "raptors" or "birds of prey" but it was missed in the editing process. We will update the page and we appreciate your contribution.