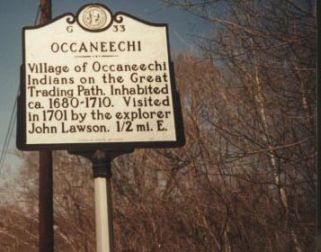 The Occaneechi Indians were a tribe of American Indians who lived in the Piedmont region of what are now North Carolina and southern Virginia prior to European settlement. They are first mentioned in historical records in 1650, when an Appomattox Indian guide told the English explorer Edward Bland that there was an island in the Roanoke River near present-day Clarksville, Va., where "some of the Occonacheans lived." The Occaneechi reached their greatest prominence as middlemen in the fur and deerskin trade that flourished between the Virginians and the Piedmont Indians during the 1660s and 1670s. Although no written accounts of the Occaneechi language have survived, the tribe is thought to have spoken an eastern Siouan dialect like many of their Piedmont neighbors, and the early Virginia historian Robert Beverley noted in 1705 that the Occaneechi's was the general language used by other Indians in the trade.

John Lederer, a German explorer and doctor, visited and described the tribe's island village in 1670. A subsequent visit by James Needham and Gabriel Arthur in 1673 was described in a letter written by the Virginia trader Abraham Wood. The Occaneechi's control of the trade resulted in part from their strategic location astride the Great Trading Path that led from the Virginia Colony to the Catawba and Cherokee. This situation came to an end in 1676, when the Occaneechi were attacked by a frontier militia led by Nathaniel Bacon. Following their defeat, the Occaneechi abandoned their island home on the Roanoke and moved south to the Eno River at present-day Hillsborough in Orange County. English explorer John Lawson visited and briefly described their village there in 1701. He noted that "their Cabins were hung with a good sort of Tapestry, as fat Bear, and Barbakued or dried Venison; no Indians having greater Plenty of Provisions than these."

Lawson's "Achonechy" Town was excavated by archaeologists from the University of North Carolina at Chapel Hill between 1983 and 1986. These excavations revealed a small, briefly inhabited village that consisted of about a dozen wigwamlike houses that formed a circle surrounding an open plaza. At the center of the village was a large sweat lodge. The houses were surrounded by a defensive stockade, and a cemetery containing numerous graves was located just outside the village. Artifacts found at the site included fragments of Occaneechi-made clay pots and stone tools and numerous European-made items acquired through trade, such as axes, hoes, knives, scissors, bottles, and glass beads. Food refuse, consisting of animal bones and charred plant remains, reflects a subsistence economy based primarily on growing corn, beans, and squash and hunting deer. Relative to the small size of the village and the brief time it was occupied, a large number of graves were found, attesting to the devastating impact that Iroquois war parties and European-introduced diseases had on the Occaneechi in the early eighteenth century.

By 1712 the Occaneechi had left the Eno River Valley and moved to the northeast, seeking the protection of the Virginia colonial government at Fort Christanna on the Meherrin River. There they joined the Saponi, Tutelo, Stenkenock, and Meipontsky, gradually losing their identity as a distinct tribe. They are last mentioned in the historical record in 1728 by William Byrd II, who observed that the Fort Christanna Indians were "now made up of the remnant of several other nations, of which the most considerable are the Saponis, the Occaneechis, and Stoukenhocks, who, not finding themselves separately numerous enough for their defense, have agreed to unite into one body, and all of them now go under the name of the Saponis." Although circumstantial evidence suggests that at least some of the remaining Occaneechi may have migrated northward with the Tutelo and Saponi to Pennsylvania and New York, a small community of Indians in North Carolina's Orange and Alamance Counties, known as the Occaneechi Band of Saponi Nation, claim descent from the eighteenth-century Occaneechi and were officially recognized by the state of North Carolina in 2001.

The Ocanneechi Band of the Saponi Nation is governed by a nine-member council.

In August 2002, the Ocanneechi Band of the Saponi Nation launched the Occaneechi Homeland Preservation Project.  The project included plans to purchase lands in the “Little Texas” community of northeast Alamance County.  The tribe owns land to be used for economic development for the tribal community and for tribal administrative offices.  The tribe worked with the Landscape Architecture Department at North Carolina A. & T. State University and the Rural Initiative Project of Winston-Salem to create a master plan for the site, which includes a permanent ceremonial ground, orchards with heirloom apples, chestnuts, paw-paws and muscadine grapes, a reconstructed 1701 Occaneechi village and 1880’s era farm, educational nature trails, a tribal museum, administrative office space, and meeting and classroom areas.  Elementary and middle school students regularly visit the tribal center property and learn about traditional dance, lifeways, outdoor cooking, storytelling, flint-knapping, hunting and fishing, and Southeastern regalia.

Robert Beverley, The History and Present State of Virginia, ed. Louis B. Wright (1947).

From Roanoke, Va. and Palmer

From Roanoke, Va. and Palmer Springs, Va. I DO WANT A STIPEND. I need it badly.

How do I get my Occaneechi

How do I get my Occaneechi Indian recognition status?

I suggest you contact the Occaneechie Band of the Saponi Nation for information. http://www.obsn.org

My mother is Jeffries. We

My mother is Jeffries. We are related. I am a proud Occaneechi Indian. We are related to John Jeffries one of the chiefs. Looking forward to visiting possibly soon. I have been blessed with one son and three beautiful grandchildren that need to know their roots and heritage.

Great information to learn about because so much info was hidden from us because of prior segregation of races and I feel our ancestors would be so proud and happy to know that these things are being brought out in the open now in the 21st century.I am very pleased at what many of the tribal members and community at large have done up to the present time.May God continue to keep all of them strong and driven to continue this journey of educating our community and for being so diligent in the fight for equality and recognition of Native American people. All ethnicities are important and need to be proud of who they are.Thank you for the opportunity to add a comment.

I am the daughter of the late

I am the daughter of the late Albert Franklin Jeffries & the late Mayroan Mebane Jeffries.This is very valuable information.Keep it going and good luck.I am from the Pleasant Grove area and went to elementary school at Pleasant Grove Elementary School and later to Central High School for 2 years and was one of the teenagers who helped integrate into Eastern High School and graduated from there in 1968.I married a miltary Air Force officer in 1972 and I now live in New Mexico.North Carolina will always be home to me and I love the State of N.C.

My family ancestry encompasses most all of these lands in and around the Virginia/NC borders from the piedmont area all the way to coastal plains of both states. I was born in Northampton County. One of my Great Grandparents a "John Cola Henry Guy" are enumerated as being born in Virginia near and around Fort-Christ-Anna Emporia Va. His mother was recorded as a "Patricia/Parthenia Sykes" The Sykes own acres of land on what is now "Lake Gaston" The Roanoke river was damned up to create Lake Gaston/Kerr lake Then, I have another GGParent named Polly Manley who was born near Murfreesboro NC in nearby Hertford County NC. This city is on and near the Meherrin/Chowan Rivers. Then, I have another GGparent name Alfred Moore, his mother was Parthinia Ramsey born in and around Woodville/Lewiston/Kelford in Bertie County, NC down river on the Roanoke about 30 miles as the crow flies. So, there was a Indian Reservation in Kelford NC down River. Another ancestor was born up River near Brunswick/Greenville Counties Virginia near Emporia Va. where Fort Christianna was located /near top of Meherrin/Chowan rivers. So, if one stand in the middle of the County seat of Northampton and go in any direction 20 miles as the Crow flies one will run into Native American Forts/Reservations in and around NC/VA. along the Rivers of Chowan, Roanoke, Meherrin, and the Nottoway. My ancestors who are suppose to be of major native descent are as follows: Guy, Parks, Sykes, Jones, Scott, Chavis, Jeffries, Goins, Brewersin the Occaneechi Tribe....Manley, Hicks, Flood ,Pierce Canada in the Meherrin Tribe.... Moore, Ramsey, Cherry, Pugh, Boone, Flood, Jacobs in the Tuscarora Tribe of Bertie County. Most of these surnames are repeated in all of the aforementioned Tribes. This repeating of these surnames in the surrounding cities, rivers, etc only says that we most likely are of the same people. Our history has eluded us because we are not designated as Five of the Civilized Tribes designated by US European influenced Style Gov't. We were not taught our own NC/VA Native History/Culture. We were taught our Conquers History. But, Thanks to a reinvigorated interest and the invention of the internet we are slowly gathering our History and re-connecting. the only thing impeding us is our selfish selves. Some, NC tribes don't seemingly reach back and re-connect with ones who ran away, denied there heritage to survive persecution and all other horrible acts that the Europeans reigned down on our culture. I personally do not want a stipend of monies etc. I just want my descendants to know and acknowledge who we are and from whence we came and pass the Knowledge, History, and Culture on down.

I just happened across this &

I just happened across this & my family is also from the same area (Northampton Co.) I have an 1880 ( I think) census report that names a Polly Manley as the daughter of Bryant & Charlotte Manley. I was wondering are you any relation to them? If so, I can be contacted at the above email. I know this is an old posting but you never know.

informative.
my family has lived right near fort christanna for years and in brunswick county for centuries. we are said to be cherokee descendants on multiple sides of our family, living off of the meherrin river... but ive always second guessed that based off of our location....if anyone has any more info as to why that is, please reply.

this is awesome i am studying

this is awesome i am studying north carolina indians in social studies at school it helps ncpedia is a good website to go to so if you are studying indians in school go to www.ncpedia.org