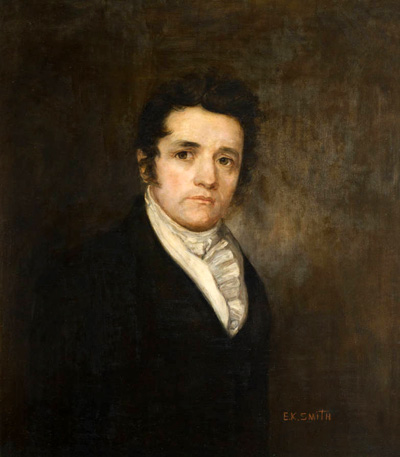 Gabriel Moore, congressman, U.S. senator, and governor of Alabama, was born in Surry (later Stokes) County of English ancestry, the son of Matthew and Letitia Moore; Letitia was the daughter of Samuel and Ann Dandridge Redd Dalton. His parents arrived from Louisa County, Va., about 1774 with their five oldest children. The family purchased land and took up grants at the foot of Sauratown Mountain on the Dan River. A year after the birth of their eighth child, Gabriel, the Moores completed a brick dwelling that came to be known as Moore's Castle. This home, which appears to have been built by Moravian artisans, was the finest private residence built in the Dan River valley at this early date, and it was standing in the 1980s.

In addition to his farming interests, Matthew Moore in 1793 began to develop an ironworks on Double Creek. At his death in 1801, his will directed that the proceeds from the sale of his Providence Iron Works be used for the education of his three youngest sons, Gabriel, Tucker Woodson, and Matthew Redd. Part of Gabriel's education must have been under Edward Hickman, who operated a school in the area; according to Matthew's will, Gabriel was at school, presumably away from home, at the time of his father's death. However, there is no documentation of his graduation from The University of North Carolina, as tradition maintains.

Apparently through the influence of older brothers and sisters, Gabriel was drawn to Tennessee and then into that portion of the Mississippi Territory along the Tennessee River that became Alabama. He was commissioned an attorney on 12 May 1808 by Governor Nathaniel Williams of Mississippi. Moore became heavily involved in land speculation, beginning at the Federal Land Sale at Nashville on 18 December 1808, joining a number of men of wealth and education from Georgia and Virginia. He opened a law practice in Madison County in the little town of Twickenham, founded at the Big Spring, which in 1811 became Huntsville. In 1811 Gabriel became a representative in the Mississippi territorial legislature, where he served throughout the War of 1812, preferring politics to the military. From 1815 to 1817 he was speaker of the house. On 3 Mar. 1817 the act establishing the Alabama Territory was approved, and on 10 Jan. 1818, when the first session of the Alabama territorial legislature met at St. Stephans, Gabriel Moore was elected speaker of the house.

During this session Moore married Mary Parham Caller, the daughter of James and Winifred Duke Caller of St. Stephans; James Caller, a native Virginian, was a prominent citizen of Washington County. This marriage was shrouded in bitterness, since it ended in divorce within a year (17 November 1818). Because of the ensuing legal proceedings, Moore did not serve in the second territorial legislature. Moreover, during that time he fought a duel with his wife's brother, leaving the brother wounded. Moore did not remarry.

The statehood Enabling Act was signed in the spring of 1819. When the constitutional convention met at Huntsville on 5 July, Gabriel Moore was one of the eight delegates from Madison County. The first General Assembly met at Huntsville in October, and Moore, elected a state senator, became president of the senate. On 4 March 1821 he won a seat in the Seventeenth Congress, defeating Colonel Silas Dinsmore of Washington County; he continued to serve through the Twentieth Congress, which ended on 3 March 1829.

At that time Moore was an acquaintance and adherent of Andrew Jackson, and his style of politics was much like the general's. An opponent said grudgingly, "Moore was a skillful electioneer, and courted the lower stratum of society." He also came to know John C. Calhoun, who as secretary of war placed a high priority on the Muscle Shoals canal on the Tennessee River west of Huntsville, a project that had Moore's support and earned Calhoun the beginnings of friendship from Moore. In the campaign of 1827, Moore was opposed by Clement C. Clay, the first chief justice of Alabama, whose background closely paralleled that of Moore. At his defeat by Moore, Clay was deeply embittered and he bore a lasting hatred for his opponent.

In 1829 Gabriel Moore was elected without opposition as the fifth governor of Alabama. His administration pressed forward with internal improvements, the completion of the Muscle Shoals canal, and the beginning of the railroad from Tuscumbia to Decatur. In 1830, by the Treaty of Dancing Rabbit Creek, the Choctaw Indians ceded the last of their land in Alabama and Mississippi for lands in the West. Moore furthered the cause of the University of Alabama, which opened its doors on 18 Apr. 1831, just one month after he left office.

Encouraged by his stay in Congress, Moore had apparently set goals beyond the state level. The legislature, which still chose its senators, elected Governor Moore to the U.S. Senate, by a vote of 49 to 40, over Colonel John McKinley. He resigned the governorship on 3 March 1831 and a day later became senator.

Alabama was then a strong Jackson state, and Moore went to the Senate with much backing from the Jackson men. He himself showed an early preference for Vice-President Calhoun, and after a year he broke with the Jackson forces over the nomination of Martin Van Buren as minister to England. In Alabama the Jackson forces were furious, and they attempted to "instruct" Moore on a pro-Jackson line. For several years he remained neutral, balancing Senate factions with the sentiment at home. But by 1834 he had joined several southern senators—John Black and George Poindexter of Mississippi and Willie P. Mangum of North Carolina—in open opposition to Jackson. On the issue of "expunging" they all were similarly instructed by their pro-Jackson legislatures, and each ignored the instructions and voted against the president. In 1835 the Alabama legislature asked Moore to resign. The Whig party was beginning to unite much of the anti-Jackson national feeling, and Moore was now counted as a Whig. Moore defended his actions in the Senate, rejecting completely the concept of instruction. His record in the Senate had been independent and progressive, but it had not succeeded in substantially changing the pro-Jackson politics of Alabama.

In 1836 Moore, realizing the degree to which his support had eroded, did not offer himself for reelection to the Senate but instead ran for Congress. He was decisively beaten by Reuben Chapman. Adding further insult, he was replaced in the Senate by his hated enemy, Clement C. Clay.

Public defeat was followed by financial ruin at the hands of his nephew, Benjamin T. Moore, who in handling his interests while Gabriel was in Washington, had swindled him out of most of his property. A bitter legal battle did not regain his estate.

The Whig party, gaining strength nationally, was led by many of Moore's close political allies. He repeatedly urged them to push his appointment to various patronage jobs, such as collector of customs at Mobile, consul at Havana, marshal of northern Alabama, and chargé d'affairs in Texas. All such attempts failed. In 1844 he left Huntsville, determined to start again in Texas. On the way, he died at a wagon station near Caddo, Tex. Moore was buried on the plantation of Peter Swanson.

There are two known portraits of Gabriel Moore. One, a miniature at about age twenty-five, painted by William H. Scarbrough, is in the possession of the Alabama State Archives. A second miniature, done probably while he was in the Senate, was owned by Mrs. S. L. Boatwright of Bryan, Tex.

I wonder whether you have any

I wonder whether you have any further info about Mary Minerva, natural daughter of Gov. Gabriel Moore and one of his slave women? I am a graduate of UNC and was, for 33 years, a professional librarian (I got my professional degree - a masters degree in librarianship - at the University of Kansas, Emporia) and I need to know about Mary Minerva as I am the genealogist in my family and Gov. Gabriel Moore was my gr.-gr.-gr.-grandfather.

I am researching the

I am researching the genealogy of my great, great grandfather, John Thomas Moore who was born a slave in Madison county in 1843. Our family has long speculated that his father (or grand father) was connected to the Moore plantation near Huntsville. Perhaps Mary Minerva was the mother of John Thomas Moore? I am very intrigued!

We have no further information on this site.

Thank you for writing this

Thank you for writing this article about my Matthew Moore's interesting child, Gabriel Moore. I could not help but wonder why Gabriel and Miss Caller were married such a short time. Surely she knew him well enough to agree to marry him and yes, he is very handsome, but.....! Could it be that his slave mistress that has been alluded to but not fully explained, be the reason? Not much is said about the child Mary Minerva either. Was she the child of Gabriel and the slave mistress? Was that the reason for the duel with Mary Caller's brother?