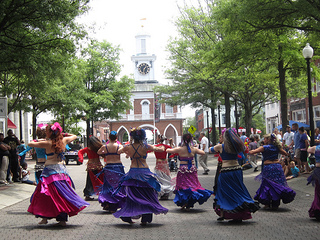 (Rutherford County), Mebane (Alamance and Orange Counties), and Statesville (Iredell County). All of the festivals, which celebrate North Carolina's state flower, the dogwood, are held in the month of April, when the trees typically bloom. The Farmville Dogwood Festival started in 1988, when Mayor Edna Earle Baker sought a replacement for the discontinued Farmer's Day. The Farmville festival features 35 to 40 musical groups performing all types of music, from bluegrass to reggae. The three-and-a-half-day, family-oriented event attracts up to 40,000 people and functions as a town reunion. Other attractions have included celebrity storytelling, a petting zoo, arts and crafts shows, mounted drill team and antique car exhibitions, and a Civil War reenactment. Activity centers around the gazebo on the Town Common.

The Fayetteville Dogwood Festival began in 1982 when Mayor Bill Hurley declared Fayetteville "The City of Dogwoods." This followed many years of local civic activity promoting the planting of dogwoods. The festival attempts to enlighten, entertain, and educate attendees as well as support and foster the natural beauty of the area. Attendance reaches 100,000 over the ten-day festival period. Some 35 festivalrelated events have included a golf tournament, a fashion show, a 10K run, a chili cook-off, a rodeo, and a parade. The festival showcase is an 18-mile driving trail called the Dogwood Trail, which winds through the city's most beautiful and historic neighborhoods with their Federal, Greek Revival, and Victorian architecture.

Through the efforts of Jimmy Hook and the Lions Club, Lake Lure began its dogwood festival in 1991. The mountainsides full of blooming dogwood trees are reflected in the lake, creating an especially beautiful natural scene. Attendance runs from 5,000 to 8,000 people. Events have typically included a parade, crafts, music, food, and free health tests such as glaucoma screening.

Sponsored by the Mebane Business Association, the Mebane Dogwood Festival began in 1989. Between 10,000 and 15,000 people attend the weekend festival, which typically includes major musical entertainment, arts, crafts, food, and a golf tournament. Local businesspeople, along with Jim Calabrese, director of the Statesville High School Grenadier Band, founded Statesville's Carolina Dogwood Festival in 1969 to promote high school bands, with a competition that attracts entries from many states. Past events, spread out over a week or more, have also included a parade, an auto show, beauty pageants, golf and softball tournaments, and a beach band concert.