by Dr. John A. Diemer and Dr. Andy R. Bobyarchick
Dept. of Geography and Earth Sciences, University of North Carolina at Charlotte, 2005.

Our State Geography in a Snap: The Piedmont Region

Extended entry on the Piedmont (from the Encyclopedia of North Carolina)

Not all species listed are found in all parts of the region. Check the range map in the species profile for more information. 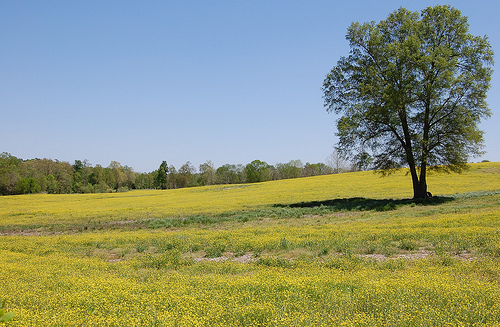 West of the Fall Line is a geologically ancient region that is underlain by a complex of metamorphic and igneous rocks .  The rocks are remnants of a major mountain system that was created over 300 million years.  The associated upheaval involved volcanic activity as well as the folding and faulting of the pre-existing rocks.   After the uplift was over, erosion took hold and wore away the mountain chain, leaving the contemporary, rolling plateau of the Piedmont.  Here and there areas of more resistant rocks form hills or low mountains on the surface of the Piedmont.  These hills are known as Monadnocks.  Examples are the Uwharries, Sauratown Mountains, Kings Mountain, the Brushy Mountains and South Mountains.  In other areas, such as the Carolina Slate Belt, somewhat softer rocks have eroded more deeply, forming lower areas that are often filled by lakes.


The Piedmont covers about the same amount of area as the Coastal Plain but it is higher in elevation, ranging from as low as 300 feet at the Fall Line to as much as 1,500 feet at the foot of the Blue Ridge Mountains.  Seven major rivers and their tributaries (Dan, Tar, Neuse, Cape Fear, Yadkin, Catawba and Broad) drain the eastern flanks of the Blue Ridge, carving narrow, deep valleys in the hard rocks of the Piedmont.  These streams and their valleys are not navigable but they have afforded numerous sites for waterpower uses.

The record of the early stretching of Pangea is seen where the crust of the Piedmont fractured and great blocks subsided (Figure 6). These long lowlands, mainly along the southeastern edge of the Piedmont, are known as Triassic Basins and they include the Durham, Sanford and Wadesboro Basins. Rivers filled these valleys with sediments from the adjacent land. Some iron ore deposits formed in them and these were important during colonial times but they are too no longer of economic interest today. Swampy conditions within the basins led to the accumulation of small coal deposits which also were of some value during the colonial era.

Some of the Piedmont rocks contain gold and other valuable metals and the area from Cabarrus County south into Georgia was the site of the first U.S. gold rush. The area supplied most of the U.S. gold production from its discovery in 1799 until the California gold rush of 1849. Mines were operating within the City of Charlotte into the early twentieth century and some other Piedmont mines were worked into the 1930s.


Topographically, the Piedmont forms a wide, rolling plateau between the low relief Coastal Plain, to the east, and the more rugged mountains to the west.Historically, the Piedmont has been easier to cross than either of the other landform regions and, until recently, most major transportation routes followed it.  Thus, the Piedmont has acted as a natural corridor between the northeastern U.S. and the Deep South, from the time of American Indians until today. Early colonial trails followed Indian paths, then came the North Carolina Railroad and later highway I-85. All followed the natural corridor that was created by events that began millions of years ago.

this is so cool

this is so cool

We're always trying to make the site as relevant and useful as possible for our visitors so please help us by telling us what kind of facts or information would be helpful to you. Being as specific as possible will help us better understand what users need.

I'm so sorry mam for my

I'v leaned alot from this

I'v leaned alot from this pasg

nice web site to get

nice web site to get informassen