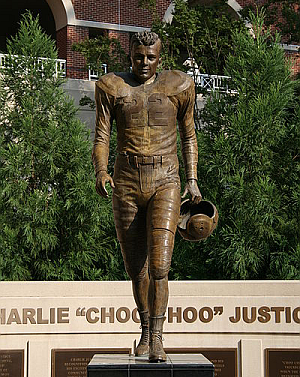 A native of Asheville, Justice acquired his nickname in the Navy, into which he was drafted in 1943. Seeing him dodge tacklers for the Bainbridge Naval Training Center team, an officer remarked, "He looks like a runaway train. We ought to call him 'Choo Choo.'"

After the war, Justice chose to play for UNC, though many other college and professional teams vied for his talents. From 1946-49, the Tar Heels had a record of 39-9-2, went to 3 bowl games, and even achieved a number one ranking in the AP Top 10. Justice himself was named National Player of the year in 1948, was runner up for the Heisman Trophy in 1948 and '49, and is still in the record books at UNC, ranking number one in kickoff returns, 3rd in career total offence, and 4th in all-purpose yards and career scoring.

Justice played for the Washington Redskins in the National Football League in 1950 and again from 1952-54, before retiring to work in the oil business and then in the insurance industry. He was inducted into the North Carolina Sports Hall of Fame in 1963. He died at his home in Cherryville on October 17, 2003, at the age of 79.

Thank you very much for including my dear friend Charlie Justice in your list of notable Tar Heels. If I may, I offer two slight corrections:
UNC's Football record between 1946 and 1949 was 32-9-2
Charlie Justice, the UNC football legend, did not have a middle name. His son, born in 1948, was named Charles Ronald Justice.
Again, thank you very much.

My dad talks about his

My dad talks about his childhood friend all the time they went to middle school and used to play on the ball field together near my dad's house growing up. My dad made it all the way to training camp with the Brooklyn Dodgers before he hurt his feet and could not play.