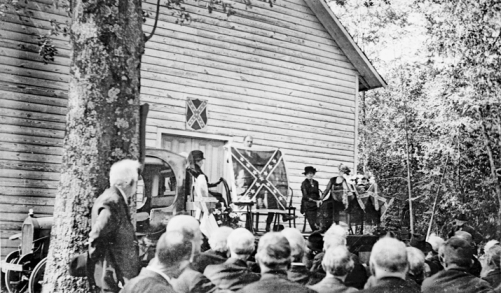 866. In that first year after the close of the Civil War, communities across the South hosted ceremonies at grave sites, on courthouse lawns, and at state capitols. That was the beginning of an annual tradition observed with memorial addresses by dignitaries, band concerts, the laying of wreaths and flowers, picnics, and community meals. Through the years, some southern states began to neglect this custom, but in many places it has continued.

In North Carolina 10 May, the date of the death of Gen. Thomas J. "Stonewall" Jackson, was originally named by the members of the Wake County Ladies' Memorial Association as the day of remembrance. On that first Confederate Memorial Day, the citizens of Wake County secretly made their way to Raleigh's Oakwood Cemetery, since the Reconstruction military governor had threatened to shoot anyone who gathered for such a purpose. Nevertheless, Raleigh citizens assembled then, as they have every year since, to honor North Carolinians who wore the Confederate uniform.

By the end of the twentieth century, two Confederate Memorial Days had come to be observed in North Carolina. The 10 May date remains the official Confederate Memorial Day in North Carolina, when Confederate descendants fly their flags and join in a variety of events to mark the occasion. Depending upon personal and political loyalties, the governor sometimes takes note of the day through an official proclamation. A second memorial is held during the first weekend in May, when the Sons of Confederate Veterans and the Military Order of the Stars and Bars hold their annual conventions. During that weekend, besides the two convening organizations, members of the United Daughters of the Confederacy, the Order of Confederate Rose, the Children of the Confederacy, and other historically minded citizens gather for memorial services at Oakwood Cemetery, at the State Capitol, and elsewhere. Solemn services, as well as dances, balls, and picnics, are also traditionally held in many towns and communities across the state.

Thanks for the history of

Thanks for the history of this sacred and somber day... my two relatives were severely wounded in combat at Gettysburg in July of 1863 during the ill fated Pickett s Charge... PVTs JT and Eurel Simpson fought for the Confederacy in the NC 26th Infantry Rgt... Deo vindice!

From the article: " On that

From the article: " On that first Confederate Memorial Day, the citizens of Wake County secretly made their way to Raleigh's Oakwood Cemetery, since the Reconstruction military governor had threatened to shoot anyone who gathered for such a purpose." Is there a source for the Gov. threatening to shoot anyone observing Confederate Memorial Day?? Just curious. Thanks
Robert Caudle

Thanks for submitting your

Thanks for submitting your question to NCpedia. I've sent an email to you connecting with you Reference Services at the NC Government & Heritage Library. Their direct email address is slnc.reference@ncdcr.gov. Additional contact information may be found for them at http://statelibrary.ncdcr.gov/reference/reference.html. Someone in Reference Services will be in touch with you soon about your question.