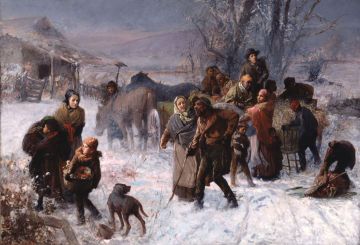 The Underground Railroad was a secret system of individuals who assisted fugitive slaves in their quest for freedom prior to the Civil War. The term, used between about 1830 and 1860, refers to the swift, "invisible" way in which the slaves escaped. Usually they hid during the day and moved at night. The fugitives and the people who helped them used railroad terms as code words: hiding places were "stations," people who aided the runaways were "conductors," and the runaways themselves were "passengers" or "freight." In addition to white members of the Underground Railroad, fugitive slaves relied heavily on fellow slaves and free blacks, who rarely betrayed them. The most famous black leader in the movement was Harriet Tubman, a nonliterate runaway slave who became known as the "Moses" of her people. She returned to the South, including the Blue Ridge Mountains, 19 times to help about 300 African Americans escape to freedom.

The Underground Railroad and the abolitionist movement in North Carolina, as elsewhere, was spearheaded by the Society of Friends (Quakers). In 1809 Quaker slaveholders in Guilford County deeded all of their slaves to the North Carolina Yearly Meeting, which over the next few years spent about $13,000 relocating blacks in northern states, Haiti, and Liberia. The Greensborough Patriot (Greensboro) was the state's only abolitionist newspaper. The state's first abolitionist organization was formed in Guilford County in 1816; called the Manumission Society and later the North Carolina Manumission Society, it soon had several chapters and 1,600 members. After legal and other pressures forced the society to disband in 1834, many of its members became active in the Underground Railroad.

As early as 1819, Vestal Coffin had established an Underground Railroad station in Guilford County. His sons Alfred and Addison carried on his work, as did his cousin Levi Coffin. These four, but especially Levi, were unquestionably the best-known of Guilford County's abolitionists. In 1826 Levi moved to Newport (now Fountain City), Ind., where he received the unofficial title of president of the Underground Railroad. His home became known as "Union Station" because of the many runaway slaves who sought temporary refuge there.

The U.S. Congress's Compromise of 1850, which admitted California to the Union as a free state, included the Fugitive Slave Act. Southern states expected that this measure-providing that private citizens as well as officers of the law would assist in apprehending and returning runaway slaves and imposing heavy penalties for failing to comply with the statute-would be effective in returning slaves to their masters. But the act was widely disregarded by northerners. Many officials and individuals in the North not only refused to return the fugitives but also began to play active roles in the Underground Railroad.

The number of slaves aided by the railroad has long been in dispute and subject to widely varying estimates. It most certainly was not the flood of fugitive slaves claimed by antebellum propagandists and later fiction writers (up to 100,000 people). Indeed, the actual number likely represented only a small fraction of the slaves held in bondage.

Wilbur H. Siebert, The Underground Railroad from Slavery to Freedom (1898).

We do have slavery today,

We do have slavery today, especially women and children. They are held in bondage all over the world. Threats of violence against their families, forced addiction to drugs, and other means of coercion ensure their compliance. They are stolen, sold, and forced into labor, often of a sexual nature. They are sold by parents to settle debts, purchase drugs, or simply to be rid of a mouth to feed. They are offered promises of work, only to be kidnapped, and extorted. In many cases, people of the Central and Southern America's are held to captivity by the drug cartels, and other criminals. The Arabic slave trade is still alive and well. Don't let anyone kid you.

Having to work two jobs at

Having to work two jobs at minimum wage is a form of slavery.

I am so glad that we have no

I am so glad that we have no more slavery