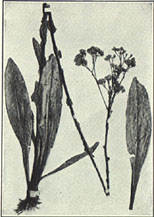 Deertongue, also called dog-tongue and vanilla plant (Trilisa odoratissima), is native to the U.S. coastal region from North Carolina to Florida. It is characterized by basal clusters of dog- or deer-tongue shaped leaves followed by a three-to-five-foot central flower stalk with purple flowers in late summer. It inhabits the poor, sandy soil near Carolina Bays or pocosins and flat pine lands and is found as far inland as Sampson and Wayne Counties.

The deciduous leaves of this perennial herb were the focus of its value to people. Deertongue leaves were harvested from June to the first frost, sun dried on blankets, and sold to buyers that baled the dry leaves and in turn sold them to large buying centers. Two of the largest of these centers were in Brunswick, Ga., and Richmond, Va. Most of the dried leaves were then sold to tobacco companies, ground up, and placed in tobacco products to give a pleasant, vanilla-like aroma. Tobacco companies did not make this practice public, but it persisted until at least the 1970s, when supplies of deertongue began dwindling and substitute ingredients were found.

In early homesteads, deertongue leaves were placed in bureaus to impart a pleasant smell to clothing or hung in bundles in rooms to freshen the air. Deertongue also has medicinal properties; Native Americans and the earliest settlers made a tea that was believed to be an all-purpose cure and tonic. Deertongue concoctions were also used as stimulants and sweat-inducing agents.

The intoxicatingly sweet aroma is wonderful and can still be purchased through Etsy, by whole dried leaves...

Well I was talking to my

Well I was talking to my husband when I was a child remembering years ago going out with my grandma picking it. I had a good time being out in the woods with them and I always wondered what it was even used for and I asked google and found out it’s is somewhat still being used and I would like to have some for tea or some smell good stuff. I would like to know more about it.

Deer tongue is still used in

The two "Deer Tongue" businesses are out of the business, I believe to be deceased

where are the two large

where are the two large buyers (or centers) in Brunswick,Ga that buy deertongue? or contact num.

I believe that the buyers

I believe that the buyers that was in Brunswick is out of the business. I used to sell my deer tongue to Mays Junk Yard. He had this junk yard and he also brought the deer tongue

The centers (one in Brunswick

The centers (one in Brunswick, one in Richmond) mentioned in the article are long gone, along with the practice of adding deertongue to tobacco.

Good information on deer tongue to know. We grow this botanical and am looking for customers perhaps in the medicinal herb arena.