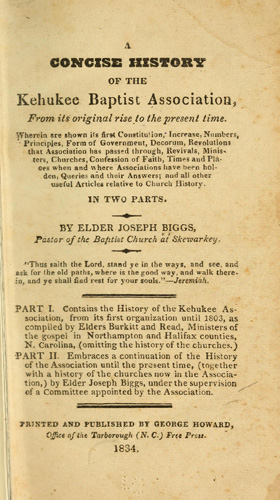 Library catalogs attribute "An argument between a Baptist and a Methodist relative to the ordinance of baptism" (Edenton, N.C., 1806) to Lemuel Burkitt. Can someone verify this attribution? The preface is signed: A sincere lover of truth. I'm about to correct his heading in the National Authority File to include the 1807 death date (his dates have been established as 1750-1806) and will also add a cross reference from Sincere lover of truth. But I'd like to say where the attribution originated. Thank you.
Doris O'Keefe, senior cataloger for rare books, American Antiquarian Society, Worcester, Mass.

Forwarding your comment to the cataloging department of our library. Hopefully they can help you.

Another distant descendant of

Family lore has always insisted that LB was in fact married to a Native american woman of the Cherokee tribe. This is not mentioned in your fine summary biography, though at one point I had some traces of evidence that was the case.

It wold be wonderful if you could clarify one way or another. As an independent child I was always proud of my "indian blood".

And for the record this Burkitt descendent lives in Paris.

Thank you for your helping us understand ourselves better..

Thank you for visiting NCpedia and sharing your family history.

I have skimmed some of the resources and do not see any mention of the possibility of Burkitt having married a Cherokee woman.

If you do happen to come across additional resources, please share them and I would be glad to add them to the resources.

Just came across this site.

Just came across this site. Thank you so much for posting this! I am a descendent of Lemuel Burkitt. My grandfather's mother was Mary Ella Burkitt, whose father was Gen. Henry Lemuel Burkitt, this Lemuel's grandson. Mary Ella's brother was Exile Burkitt, named so because he was born in a smoke house during the civil war. This information is just wonderful!

I am also a descendant of

I am also a descendant of Lemuel Burkitt thru his son Burgess. Thank you for posting this information. (and Celia Belle is my cousin!)

You're welcome! We're always happy to provide the public with this information.

I have be made aware that I'm

I have be made aware that I'm a descendant of Lemuel Burkitt due to the hard work of my Aunt Celia Bell Yoder who is a member of the Daughter's of the American Revolution. Also I want to thank this site for the recorded history.

You're welcome! We're happy to provide this information to the public.