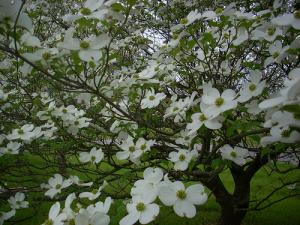 In 1941 the North Carolina General Assembly designated the flower of the dogwood tree (Cornaceae) as the official state flower. In actuality, three species of dogwoods exist in North Carolina. The alternate-leaf dogwood (Cornus alternifolia), which is common in the mountains and rare in the northern piedmont, has leaves that are simple and elliptical but are alternate on their stems (hence the name). It has small white flowers that are in loose, flat-topped clusters. Various animals eat its small, deep-blue or black fruit; the plant is usually a shrub or a small tree up to 30 feet tall and eight inches in diameter with a broad, flattened crown.

The gray dogwood (Cornus racemosa) is a bush that has simple, elliptical, and opposite leaves. Its gray-to-white fruits and gray twigs give it its name. This dogwood grows in thickets in damp meadows in the mountains of the northwestern corner of North Carolina.

The flowering dogwood (Cornus florida), common in the wild and popular as an ornamental, is a tree that enchants people every spring. A relatively short tree, its four white (or sometimes pink) petal-like bracts circle the tiny greenish white flowers in the center. The bracts have dark indentations at their tips. The tree has simple, opposite, elliptical leaves that in fall turn from green to red to maroon, and its red berries are a favorite of birds. The flowering dogwood is found in deciduous woodlands throughout the state up to elevations of 4,500 feet.

In years past the hard, shock-resistant wood of dogwood trees was used to make farm implements, wedges for rail splitting, shuttles for spinning mills, tool handles, and other things. The bark, flowers, berries, and roots of the flowering dogwood also had many medicinal purposes. The bark and sometimes the roots were used as a substitute for Peruvian bark in treating intermittent fevers and malaria. The bark was also employed as an antiseptic and a cathartic. The flowers (not the bracts) made a good substitute for chamomile tea, and the berries, when soaked in brandy, also made a serviceable bitter.

Several legends surrounding the dogwood are still repeated in North Carolina. One popular story holds that 2,000 years ago the flowering dogwood tree stood straight, proud, and tall. Because the tree had such strong wood, the Roman soldiers under Pontius Pilate chose to make the cross of Jesus Christ out of dogwood trunks. The dogwood tree was horrified but had no choice. In order never to serve as a cross again, the dogwood became a slender, twisted tree. In addition, to help people remember Jesus' sacrifice, the dogwood flowers bloom in the spring in the shape of a cross with nail holes at the ends.

C. Ritchie Bell and Anne H. Lindsey, Fall Color and Woodland Harvests: A Guide to the More Colorful Fall Leaves and Fruits of the Eastern Forests (1990).

why is it caled a doogwood

why is it caled a doogwood flower

Alas, it appears that there is no easy answer to your question. There are a few different explanations out there, but no real proof or evidence that we can find.  One explanation is that the common name "dogwood" arose by the 17th century from the term "dog tree" or "hound's tree"; the other is that the term originated as "dagwood", possibly from Old English for "dag" or daggers (since the slim branches of the tree can be easily shaped into points).

But again, no real proof that either of these theories is correct.  Still, the dogwood is a lovely tree and a nice part of spring in North Carolina.

Thanks for your question and if you happen to find the answer, please let us know!

If you could put more info

If you could put more info about a dogwood flower I would be happy.

I'm sorry that you didn't

I'm sorry that you didn't find the information you are looking for about Dogwoods. Here is a link to an FAQ page about Dogwoods by the United States National Aboretum: http://www.usna.usda.gov/Gardens/faqs/dogwoodfaq2.html. If you still have additional questions, please feel free to contact Reference Services at the Government & Heritage Library. Contact information for them may be found at http://statelibrary.ncdcr.gov/reference/reference.html. Good luck in your research.